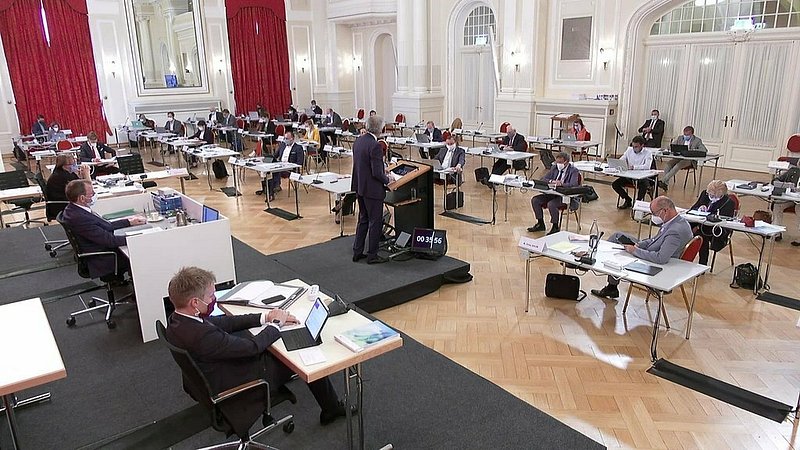 Too optimistic, out of touch with reality, and not ambitious enough: The opposition parties did not hold back their criticism during Thursday morning's debate in the Chamber of Deputies.

The majority parties stated that they were proud of the fact that Luxembourg's economy has survived the crisis rather well compared to other countries. However, opposition MPs had a lot to criticise when it comes to the details of that analysis.

MP David Wagner from the Left Party (Déi Lénk) said that Minister of Finance Pierre Gramegna had reminded him of Donald Trump when he presented the Stability and Growth Programme, with the MP calling it "a major denial of reality".

Overall, the opposition parties do not think that the country is doing as well as the government thinks it is. Inequalities continue to be on the rise, and the new deputy head of the Christian Social People's Party's (CSV) parliamentary group, MP Gilles Roth, pointed out that 122,000 people are currently living below the poverty line. During the recent crisis, the younger generations had been given enough attention, with many of them struggling to find an affordable home on the housing market. Since the inception of the coalition of Democratic Party (DP), Luxembourg Socialist Workers' Party (LSAP), and the Green Party (Déi Gréng), housing prices had increased by more than half.

Roth stated that former Minister for Housing Maggy Nagel announced big changes, but the only change that happened was that she was "sacked and literally sent to the desert". Apart from that, Roth continued, nothing had changed. As an example, he stated that in 2007, 5,000 housing units were built, the same number as in 2020.

MP François Benoy from the Green Party acknowledged that the housing crisis "is a problem". However, he is not in favour of the CSV's suggestion to expand the development plan. On the other hand, Benoy expressed his satisfaction regarding the fact that austerity measures had been avoided, in Luxembourg and on a European level.

The MP stated that the Relaunch Pact proved that European leaders have recognised what the current situation requires. While the plan is "not perfect", it is "exceptional and historic". The plan is worth €750 billion, a majority of which will be distributed through national relaunch plans to the individual member states. Benoy also praised the solidarity of the plan, with countries hit particularly hard by the pandemic receiving additional funds.

MP Roy Reding from the Alternative Democratic Reform Party (adr) rejected Benoy's argument, stating that it is "a mistake" to give more to those "who simply mismanaged". Reding stressed that his party is against a "debt union" and in his eyes, this was nothing more than that and constituted a "breach of contract".

LSAP MP Claude Haagen on the other hand praised the way Luxembourg had come out of the crisis from an economic point of view.

€45 million in the first three months of the year for partial unemployment alone, an investment well worth it in the eyes of the MP as "all of the measures have worked well". Unemployment had not skyrocketed as some had feared it would. And the economy had suffered less than initially projected at the beginning of 2020.

MP André Bauler from the DP attributes this to Luxembourg's financial centre, with Bauler stating that it had made sure that Luxembourg's economy continued to grow "even in lockdown". This is why the Grand Duchy's GDP for 2020 is expected to decrease not by 6%, but by only 1.3%.

For MP David Wagner, this is no reason to be optimistic. Wagner points out that the growth of the financial place does not necessarily correspond to the economic realities in the real economy. The MP advises caution in this area.

One of the few topics, which seemed to unite the MPs across party lines was the lack of skilled workers in the healthcare sector. MP Sven Clément from the Pirate Party accused the government of not investing enough money to solve the problem in the long-term.