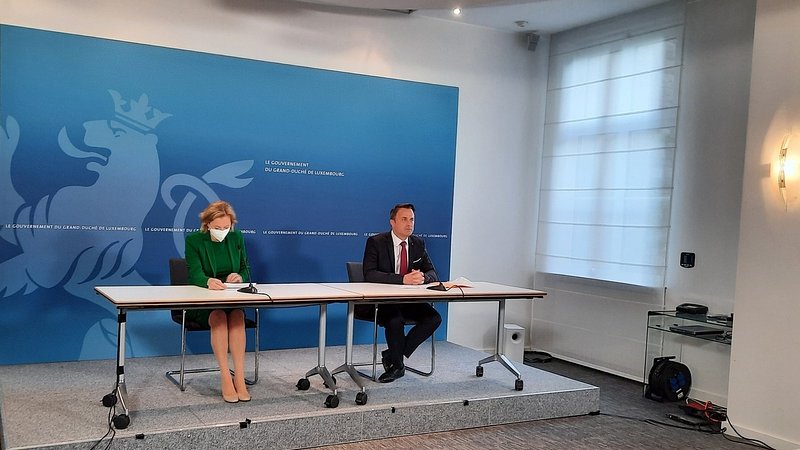 Wednesday's briefing was punctuated by statistics as the premier and health minister provided a comprehensive overview of the coronavirus situation in Luxembourg.

Dominating the press conference was the launch of new site impfen.lu, where people aged 30-54 can register their interest to receive the AstraZeneca vaccine. The website went live at 6pm, with registrants added to a waitlist on a first come- first served basis. The first appointments are expected to take place as early as next week.

The length of time elapsing between registration and invitation will be dependent on the demand. Bettel warned it could still take weeks, even months, before invites are wholly issued.

As it stands, around 81.3% of vaccines delivered have been administered. 46,000 people are now fully vaccinated. Between 2 and 5% of people had refused the jab offered to them upon arriving at a vaccine centre, said Bettel, but overall the uptake had been very positive. If deliveries remain on track, another 100,000 people could be vaccinated in May.

Paulette Lenert, back after a three-week absence for ill health, said the situation was mostly stable, but still critical. A drop in hospitalisations for those aged 75 and over was attributed to the vaccination campaign, with infection rates also dropping among the over-60s. However, the virus was still spreading amongst younger people, with the average age for new infections currently standing at 36.

In hospitals, around a third of patients are in intensive care - a concerning increase, said Lenert, as previously intensive care accounted for a quarter of Covid hospitalisations. The average patient age is 57. The Minister of Health said experts had hypothesised that the new virus variants were to blame, as the more aggressive strains meant patients were taking longer to recover.

Lenert offered up details on the vaccine side effects observed in Luxembourg. Three people have died following a vaccine, she said. Investigations are still inconclusive, while autopsies are being conducted. All three fatalities were over the age of 75.

The minister underlined that such a reaction was extremely rare. Just 1% of all people vaccinated said they had noticed side effects, with 129 saying they suffered severe side effects which prevented them from carrying out normal tasks the next day. Thirteen people were hospitalised following a jab, while three people suffered potentially life-threatening reactions.

A full investigation has been ordered into the above cases.

Biontech/Pfizer accounted for the majority of reactions, with 10 per 1,000 cases. Moderna and AstraZeneca accounted for 2 per 1,000 each. More information will be published on the Ministry of Health website, said Lenert.

The traditional National Day celebrations will once again be affected by the pandemic, said the PM. Alternative festivities are currently in the pipeline.

Bettel also announced a memorial ceremony would take place to honour the dead once the pandemic has concluded.