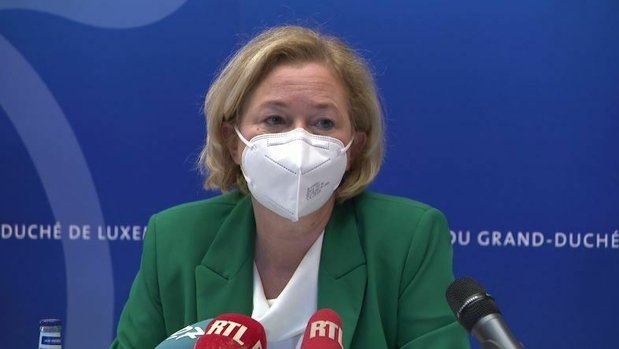 On Thursday morning, Minister of Health Paulette Lenert spoke to the press about the most recent developments in the vaccination campaign and the likelihood of a third infection wave.

During the press briefing, Minister Lenert explained that due to the renewed rise in new coronavirus infections, the government was now willing to take a risk and change its approach to the vaccination rollout.

In other words, the campaign is to be accelerated. The government will now focus on giving as many people as possible their first vaccine, with up to a ten-week wait for a second jab. This is a strategy that other European countries are already pursuing.

Although the AstraZeneca vaccine allows for a longer period in between doses, the government is still taking a risk by changing its position, Minister Lenert confirmed. Nevertheless, the Ministry of Health is confident that everybody will be able to get their second appointment within the ten-week limit. In the end, it will come down to the delivery of doses, Minister Lenert concluded.

Jean-Claude Schmit, who is in charge of the Directorate of Health, also addressed the press on Thursday morning. He underlined that there was no reason to doubt the efficacy of the AstraZeneca vaccine and referred to a number of recent publications that confirm its potency.

Furthermore, officials announced that the "Santé" will buy more rapid tests. An evaluation of different models is already taking place, with a specific focus on two different aspects: straightforwardness of the test and accuracy of the result. Jean-Claude Schmit conveyed that one of the tests under consideration is a nasal swab used in the front area of the nose.

Minister Lenert reiterated the seriousness of the situation and referred to the rising infection numbers. By now, the British variant, which is known to spread faster, makes up more than half of the positive cases. She therefore reminded the public about the importance of physical distancing and reduced social contacts, especially when it comes to private encounters. She also reemphasised the importance of adhering to quarantine procedures and getting the mandatory test after the sixth day.