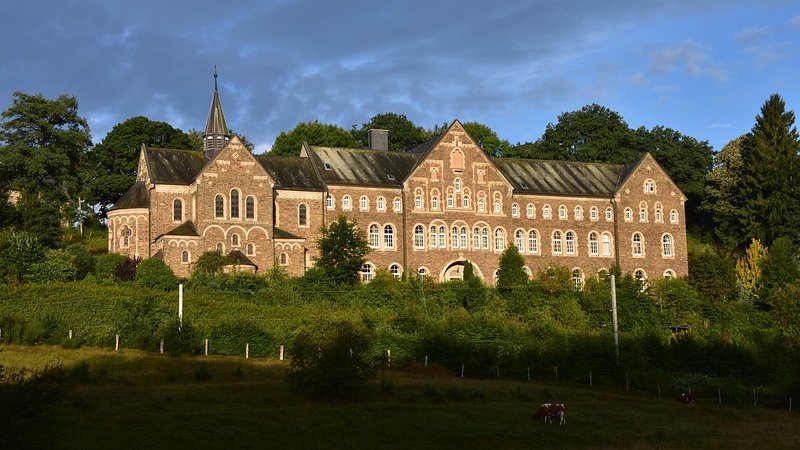 The state plans extensive renovation works in the 110-year-old abbey, which is to be turned into an educational memorial centre.

At the end of January, the government signed a convention with Luxembourg's Jewish communities which not only provided for financial reparations, but also included a very particular material promise.

By signing the convention, the state promised the Jewish communities that it would purchase the Cinqfontaines Abbey located between Troisvierges and Sassel. A promise which had in fact already been fulfilled by the time the convention was signed.

On 31 December 2020, the government signed a purchase agreement with the community of the Priests of the Sacred Heart. €7.9 million for the location called "Pafemillen" (Cinqfontaines in French) in Wincrange.

The state plans extensive renovation works in the 110-year-old abbey, which is to be turned into an educational memorial centre.

The reason for this is that Cinqfontaines is deeply entwined with the history of the Luxembourg Jewish community in World War II and thus plays a key role in the Shoah as it occurred in the Grand Duchy.

In fact, the Gestapo transformed the Abbey into a sort of "intermediate stop" – a place where Jewish people were held before they were taken to extermination camps.

Between October 1941 and April 1943, a total of 674 Jews were deported in eight convoys from Cinqfontaines to the German-Polish Łódź Ghetto, the Theresienstadt Ghetto, and the Auschwitz-Birkenau concentration camp respectively.

Following the end of the war, US troops used the abbey as a military hospital before the priests eventually moved back in.

© Carine Turpel
© Carine Turpel
The photos published on this site are subject to copyright and may not be copied, modified, or sold without the prior permission of the owner of the site in question.

As a memorial centre, the former abbey will serve as a place to remember those that were deported by the Gestapo. The goal is to do it in an accessible and tangible manner in order to allow young people to better understand the extent of the crimes committed by the Nazis, in particular regarding their persecution of innocent Jewish families. A persecution that is a part of Luxembourg's history and that is now to be documented and addressed.

Cinqfontaines is to become a symbol of resistance against antisemitism and racism. Since 1969, a monument by Lucien Wercollier already serves as a memorial for the events which occurred in the 1940s.

According to ministers Xavier Bettel, Claude Meisch, François Bausch, and Pierre Gramegna, it is currently expected that the rebuilding and renovation works will cost approximately €17.6 million. However, the ministers also stressed that this is merely a preliminary estimate as there are currently no definitive construction plans.

The ministers provided this information in a reply to a parliamentary question by MP André Bauler from the Democratic Party (DP).

The construction of the memorial centre also marks the end of the building's role as an abbey. The Priests of the Sacred Heart of Jesus Christ have lived and worked in the abbey since 1903. The building was constructed by Johannes Klomp, who also designed the abbey as well as the church in Clervaux. Currently, there are around 2,200 Priests of the Sacred Heart living in 42 countries.