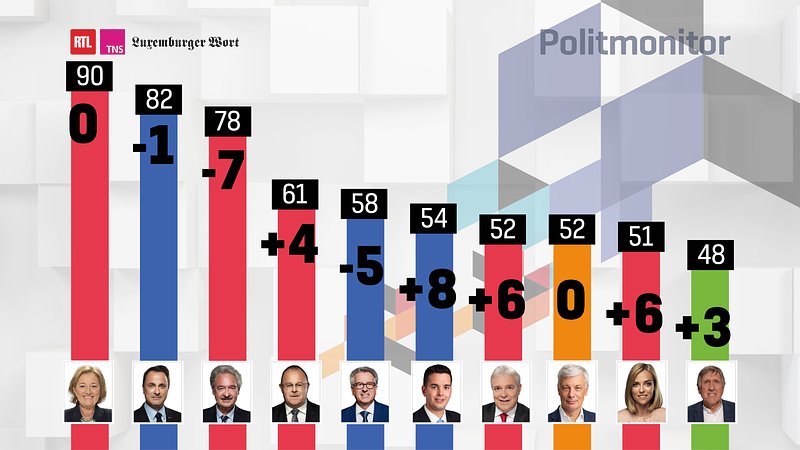 TNS Ilres has conducted another Politmonitor survey to gauge the public's feelings towards members of the government and other politicians.

The survey, conducted in conjunction with RTL and the Luxemburger Wort, revealed that Minister of Health Paulette Lenert still ranks as one of Luxembourg's most favoured politicians, in no small part due to her management of the ongoing Covid crisis.

Lenert has played an extensive role at the helm of the government's taskforce during the pandemic, and the majority of respondents said they were satisfied with her work. The LSAP minister ranked at the top of the charts when the survey was last conducted in July, and has maintained her ranking of 90 points, said Luc Biever, TNS Ilres director.

In second place, Prime Minister Xavier Bettel maintained his ranking from the summer, but has improved his position after LSAP Minister of Foreign Affairs Jean Asselborn dropped to third place.

Asselborn saw his ranking decrease from 85 to 78 points, thus losing the most points of the group. His rating has dropped significantly among male members of the population, losing 11 points for sympathy - or affinity, in this context. However, he still maintains a fairly high ranking overall.

Reasons for this drop in popularity may vary as currently, inner-political issues are more important to the national population than the international playing field.

As it turns out, all remaining LSAP politicians have increased their ranking over the same period of time: Romain Schneider, Dan Kersch, and Taina Bofferding. The same goes for DP members Pierre Gramegna, Corinne Cahen, and Lex Delles. Minister of Education Claude Meisch on the other hand finds himself further back in the field than on previous occasions.

The Greens also seem to be struggling at the moment. Although both François Bausch and chief whip Josée Lorsché managed to advance in the ranking, they still remain in the bottom half of the field. The lowest score belongs to the party's new co-president Meris Sehovic, which can partially be blamed on his lack of publicity.

Opposition party CSV also had trouble making a mark in the field. When it comes to affinity and competence, their members appear to be caught in a gridlock. Claude Wiseler remains the party's number one representative, while both president Frank Engel and chief whip Martine Hansen find themselves at the end of the ranking. Out of all politicians, Engel scored lowest among his own base of supporters.

At ADR then, new party head Fernand Kartheiser fails to generate the same amount of enthusiasm as his predecessor Gast Gibéryen. On the other hand, Sven Clement from the Pirate Party increased his position in the field by 7 points compared to the month of June. The MP has managed to enter public debate on a number of occasions and is also considered a well-like figure in the domain of social media.

More information can be found on the website alia.lu.