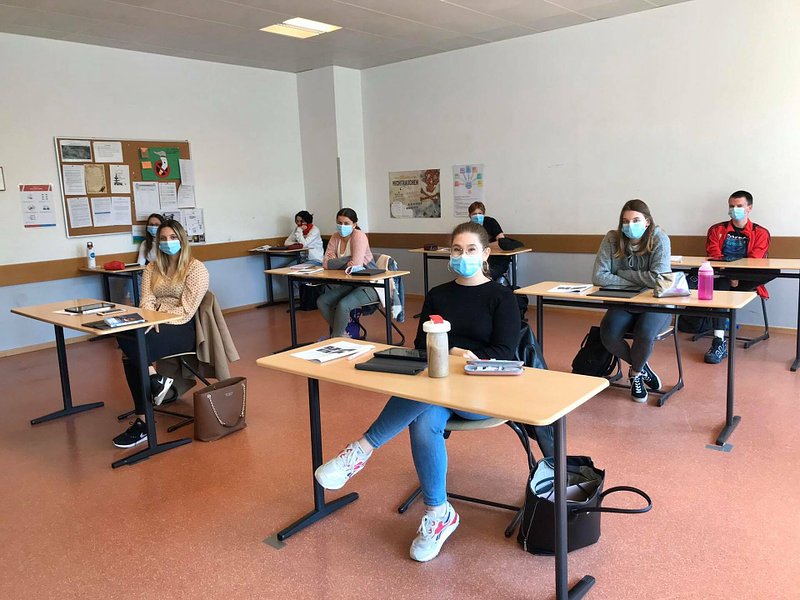 Luxembourg's secondary schools partially reopened for final year pupils on 4 May. All other students headed back to school on 11 May when the second phase of the country's exit strategy kicked off. We had a chat with fifth-year pupils (3eA*) at Robert Schuman secondary school about some of the perks and pitfalls of education in these turbulent times.

Returning to school - a mixed bag of emotions

The reopening of Luxembourg's schools remains a controversial case both in political and social circles. Final year pupils flocked back to their desks on 4 May while all other classes returned to the classrooms when the second phase of Luxembourg's gradual exit plan came into effect on 11 May. Entering a school makes it abundantly clear that virus fears have, rightly so, not yet drifted into oblivion as unprecedented precautionary measures continue to dominate the every-day life of pupils and teaching staff. Classes are for instance split into two groups, pupils' chairs are separated, and teachers as well as pupils wear masks to stem the spread of the novel virus.

We head to Robert Schuman secondary school in Limpertsberg to find out a bit more about how fifth-year pupils who specialised in languages, literature, and new media (more on this later) experience the much-debated reopening of Luxembourg's schools. For many of them, the return to in-person learning comes as a double-edged sword.

Aurélie for instance explains that the reopening of schools was somewhat marred by virus fears. "I qualify as an at-risk person and my grandparents also live with us. I nevertheless also didn't want to miss out on actual teaching rather than just exclusively rely on online communication."

Disinfectant provided at school entrance.
The photos published on this site are subject to copyright and may not be copied, modified, or sold without the prior permission of the owner of the site in question.

While sharing some concern about health safety, other pupils show themselves relieved to be back in the classroom. According to Jovana, it was not easy to be confined at home. "Social media made it even harder. When you browse Instagram and see all those amazing pictures it really makes it even more saddening to be stuck at home."

Laetitia similarly stresses that "it feels good to have a structure in our daily life again" while Lara explains that family life has improved again with the reopening of schools. "It is nice to spend time with the family but not THAT much time. Now that schools are open again the atmosphere seems to be better at home, we have more social interaction again and my mindset has just generally become more positive."

The 3eA* we visit at Robert Schuman secondary school is slightly different from the language specialisation cycle offered in other schools. Classes not only focus on languages and literature but also on new media and comparative studies. According to German teacher Marc Erang, the goal of the modernised classes is to introduce "contemporary literature classes that pivot around comparative studies. Pupils learn to think internationally, to find interrelations across disciplines and to bring traditional art forms into a dialogue with new media."

The pupils show themselves eager to be a part of this revolutionary process in Luxembourg's education system. "It's just more modern and in tune with the times," Theo for instance explains. "In Luc Wildanger and Tom Hermes's media classes we for instance learn how to pitch ideas, how to carry out interviews, or do podcasts. This gives us more options for our later academic career and we learn to be more open." Comparative studies, communication, journalism and new media, the pupils seem to agree, are perhaps more relevant than ever.

The new media-language section was off to a rocky start. Shortly before the pandemic hit Luxembourg, unknown suspects broke into the school's editing room and stole hard-discs of several computers. 80% of computers were destroyed. The second set-back came with the closing of schools and the cancellation of Robert Schuman's open days - an opportunity that students, teachers, principal Michèle Remakel and vice-principal Mariette Wildgen had hoped to use to promote the new media classes. As Marc Erang explains, the restrictions have also made it difficult to work in teams or to engage in media projects after school. A number of media competitions and workshops that teachers had put long hours of preparation in with external partners such as the SNJ or Youth4Planet had to to be cancelled.

A blessing in disguise for young minds?

The closing of schools nevertheless also held unexpected advantages, the pupils explain. "We learned to be more autonomous and the health crisis allowed us to start a number of video and journalism projects, which is one of the goals of this new media section anyway," according to media-language section (3eA*) pupil Lara. "Our background in comparative studies came in handy as we immediately looked for historical parallels with other pandemics," she adds.

Other pupils similarly explain that they were eager to draw political comparisons between the approaches of different countries to lockdown measures, testing, and the wider pandemic rhetoric. It's key to be critical, to dissect official narratives and to compare them to other sources, Joana explains. "I have a penchant for conspiracy theories anyway; I think we always need to ask questions."

According to Lara and Laetitia, the pandemic could also influence both artists and critics. "Many readers will revisit texts like Camus's The Plague and approach them from a more modern perspective. The pandemic may even lead to a new sensibility in art and literature that is worth examining."

What's next for the budding media students?

The pupils explain that they are working on a number of projects, ranging from video diaries to a chronicle of the school year and artistic takes on the pandemic. "We hope that we can relaunch our workshops when the pandemic is over and maybe get media outlets on board in a next step. It's important that the pupils gain hands on experience and have the possibility to talk to experts in the various fields. We'll see what the future brings," Marc Erang concludes.