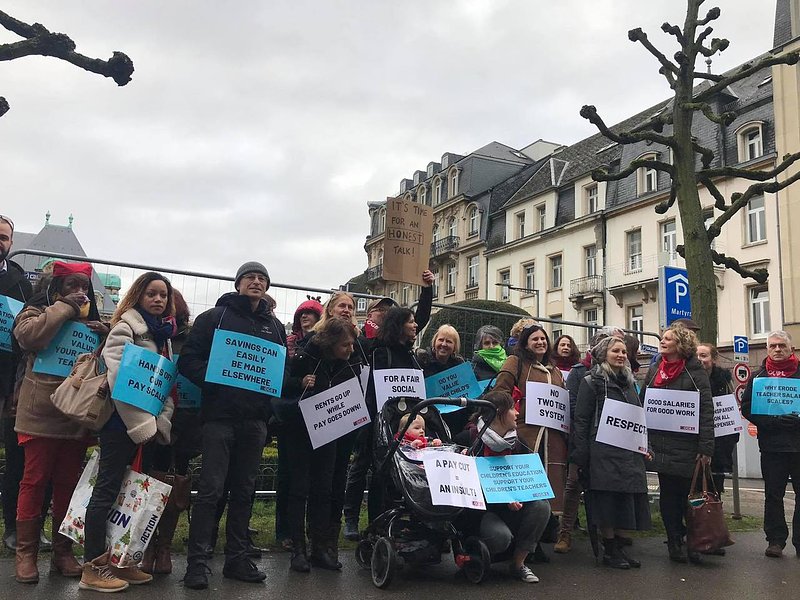 The first round of discussions between representatives of the trade unions and the national conciliation service took place this Thursday afternoon.

ISL employees formed a picket line in front of the offices of the national conciliation services at the Ministry of Labour and Employment in Luxembourg City earlier today.

Delegation walking in.
The photos published on this site are subject to copyright and may not be copied, modified, or sold without the prior permission of the owner of the site in question.

In December last year, the social dialogue between the unions and ISL officials reached an impasse, which led ISL to ask the National Conciliation Service for its support in the process of finding an acceptable agreement.

Picketers today widely expressed dissatisfaction with their employer's behaviour and stressed that they would not give in until they are heard. Matthew Dwyer, a teacher at the International School of Luxembourg, explained that they had gathered to "promote a true social dialogue between the employees and the employers." He stressed that they staff are "unhappy with the way the process has been dragged out" and particularly oppose the proposed two tiered system. If passed, this would mean that current employees remain on the same pay scale while new employees would be put on a different scale.

In Dwyer's view, this system would "promote division" and create a poor working environment while decreasing staff morale. The new agreement, he stressed, would "set a bad tone for the school, which is supposed to be a happy and encouraging place for all stakeholders involved."

ISL picket line
The first round of discussions with the national conciliation service took place this Thursday afternoon.

According to an earlier press release from trade union OGBL, ISL "management had not changed course since the start of the negotiations and was determined to introduce a new scale with a less favorable career for future teachers." Staff repeatedly expressed dissatisfaction with the proposed changes and largely rejected the proposal.

The union negotiation conducted a survey among ISL staff between 9 and 13 January, asking "if they give a mandate to the unions to sign the employers' proposal and if they are ready, in case of disagreement, to strike." 71.15% of the personnel took part in the vote. The vast majority of the voters (89.19%, which amounts to 63.46% of the personnel) responded that they were against the proposed scale and in favour of the conciliation procedure and its possible consequences.

The actions of staff and the unions began with joint walk-ins and walk-outs on 20 and 21 January. Staff and the unions stressed they were determined not to give in. In a press release in December last year, the school management had meanwhile argued that they did not categorically reject claims for salary improvements and that they were in favour of constructive dialogue.