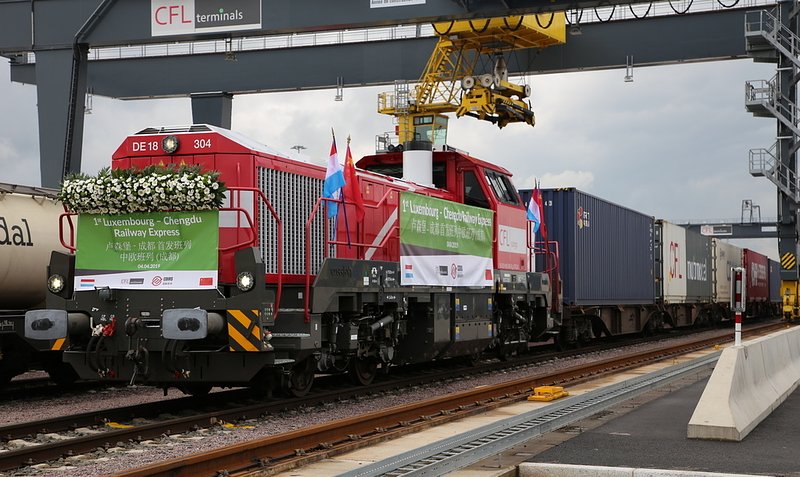 A freight train departed China at midday on Saturday local time to travel to Bettembourg. Minister for Mobility and Public Works François Bausch was in attendance as the test train left.

Bausch is currently in China for a working visit and witnessed the departure of the freight train. As he explained, the test train is an important to step to check how feasible a regular freight connection between Luxembourg and China is. Luxembourg's ambition is to become the central logistics connection zone for freight arriving from China and going on to West and Southern Europe.

The minister personally travelled to Chengdu to work on the development of the rail line , accompanied by CFL' directors. They met with the province representatives and together, sent off the train on its 15-day journey. The train will travel over 10,000 kilometres via Kazakhstan, Russia, Belarus, Poland, and Germany to reach its destination in Luxembourg.

The minister's visit was planned to the very second. It started with a short tour of the station in Chengdu, which is one of China's largest freight stations. Afterwards, the traditional ribbon was cut in front of the train heading to Luxembourg. The train's journey is testament to the hard work on both sides.

The connection with Luxembourg belongs to China's larger strategy of connecting Asia with Europe directly via the 'new' Silk Road. Vice-mayor of Chengdu explained: "Land transport has the great advantage that it only takes 12 to 15 days for the train to arrive in Luxembourg. Freight ships take about 30 days. This is why I believe that freight trains are more efficient in transporting wares, especially electronic devices, food wares, and produce."

The test train will allow both partners to ascertain how well the direct line works and how much interest exists among potential clients. But in order to be appealing to clients, the link must be regular, something Bausch confirmed is being worked on.

The same route was already tested in April 2019 - albeit from Bettembourg to Chengdu. The first Bettembourg freight train was sent to Chengdu several months ago.