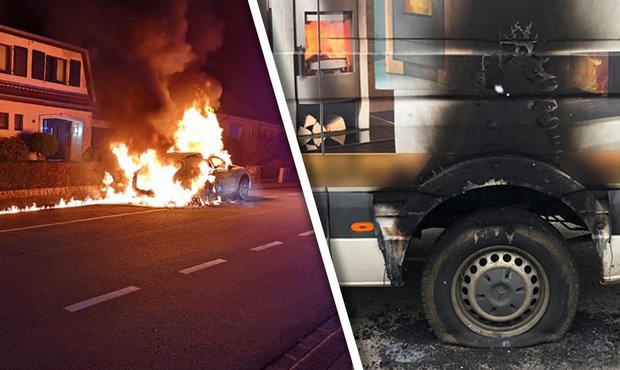 Although the presumed offender, a former fireman, is in custody, cars continue to burn in Hesperange

And still, it burns in Hesperange. Specifically, cars are still burning in Hesperange. And since the supposed arsonist is sitting in custody, this should not be the case. While he was suspected of setting the fires in the area, they seem to continue to happen.

As has been the case of late, there was a fire on the night of the Friday leading on to the Saturday, this time hitting a van. It was lit under the back tire, which has happened a couple of times now.

Thankfully, the fire was taken care of quickly. Sunday night saw the arsonist strike again: a car was set alight, the chassis completely burned and the wreck was very quickly removed by order of the prosecution.

The problem is that the presumed arsonist, who has been arrested and is still sitting in custody, now has the best alibi possible. He cannot have started the last two – or even three – fires that were set in Hesperange. And thus, the conspiracies begin.

The first, the most unlikely, is that there is a copycat imitating his now-detained 'idol'.

The second, and much more likely, is that a friend is trying to help exonerate the accused. If fires continue to start even though the charged arsonist is sitting behind bars, then his guilt stands to be questioned.

However this would mean that there is a group of arsonists active in Hesperange, a number of individuals – or at least two – who enjoy seeing cars burn.

Now that there is an intensive search for the second culprit, questions are abound as concerns his motives. There is the stereotypical answer: it’s a firefighter. Indeed, the man already sitting in custody is, according to RTL info, a former fireman.

According to further reports by the Wort, the very same firefighter was sentenced for arson 21 times in 2016. Some of the incidents include a portaloo or the hunting hut of Andy Schleck.

Naturally, his immediate entourage is where possible accomplices are being questioned: friends, colleagues, former work associates, even current and former firefighters.

And if there are darker incentives – such as anger, resentment, conflict or frustration – behind the arson that go beyond the ‘fun’ derived from setting and putting out fires, then the hearing could quickly devolve into something rather more serious.