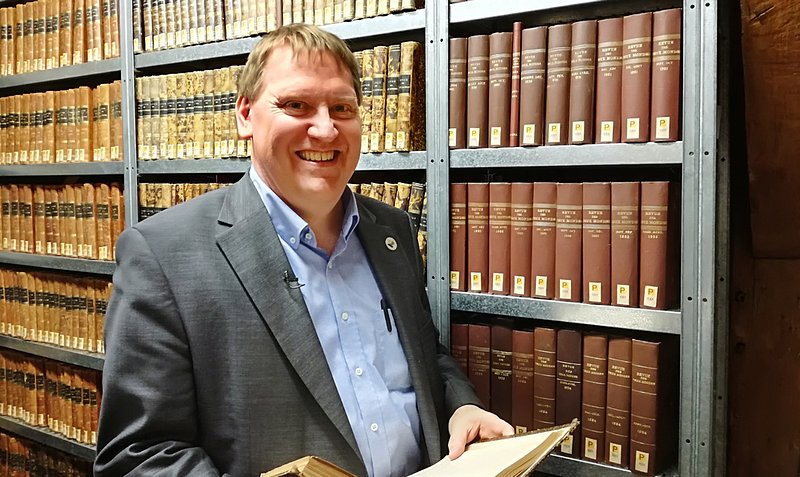 This past weekend, people could go on the very last guided tour of the catacombs of the Luxembourgish National Library (BNL).

Walls dating back to the 17th century tell us their stories. For a few more months, these walls will remain the home of the National Library of Luxembourg, and then they will take on a new function - which one that will be, remains to be seen.

For 45 years, the BNL was housed next to the cathedral, in what was the former Athénée building. From 1 April, however, the moving works begin and the 1.8 million books and documents will be transferred to the new premises in Kirchberg.

Magazines will be the first to move, then, in mid-April, the books will follow - all in all it is a mammoth relocation project.

But just before the first moving day, there was a last guided tour of the old National Library of Luxembourg on Boulevard Roosevelt on Saturday: a final opportunity to dive into the history of the library in the building itself.

The National Library was based in the former Athénée building on Boulevard Roosevelt from 1973 onward. Under the German occupation, an air-raid bunker had been installed in the basement - that room now has restricted access. One mustn't underestimate the technical installations needed by a library.

Reminders of times long gone can be seen all over the place. The Germans, for example, wrote "Trinkwasser" (drinking water) and "Rauchen verboten" (smoking forbidden) onto the walls. Up in the attic, the old wooden beams tell their own story:

Pascal Nicolay explained that the beams date back to the times of the Jesuits. It is also interesting to note that the wooden beams may seem like a fire risk, but they're not: steel melts at 1,500°C, while the wooden beams will hold longer than that if they are well-made.

It is here, in the attic, where you can find old books from 1801. A number of them are in need of restoration, which is a future project. Another striking feature is the vast number of banana boxes: they are used for moving purposes, but one has to be careful.

Pascal Nicolay explains that pesticides transferred from the bananas onto the cardboard boxes can also transfer to the books. This is why banana boxes should never be a long-term solution, not even at home.

Not in banana boxes, but in safety deposit boxes, you could find the library's biggest treasures: manuscripts from the abbey's of Echternach and Saint Hubert. The oldest text also dates back to those times.

As Pascal Nicolay said, the oldest document is a hand-written part of a prayer book, which the Pope had sent to Willibrord in the 8th century.

Talk of a new building for the National Library had already started in the 90s. Back then the idea was to keep the building next to the cathedral as the headquarters and build a large annex on Kirchberg.

This idea never saw the light of day, so now the entire possessions of the library are moving to Kirchberg.

The reactions of the visitors following the guided tour were very positive.

Some 150 people attended the final six guided tours in the lead up to the moving process.

More images of the final visit at the National Library will air on TV on Monday evening (1 April), when you will be able to learn about forbidden documents and even the historical value of phone books.