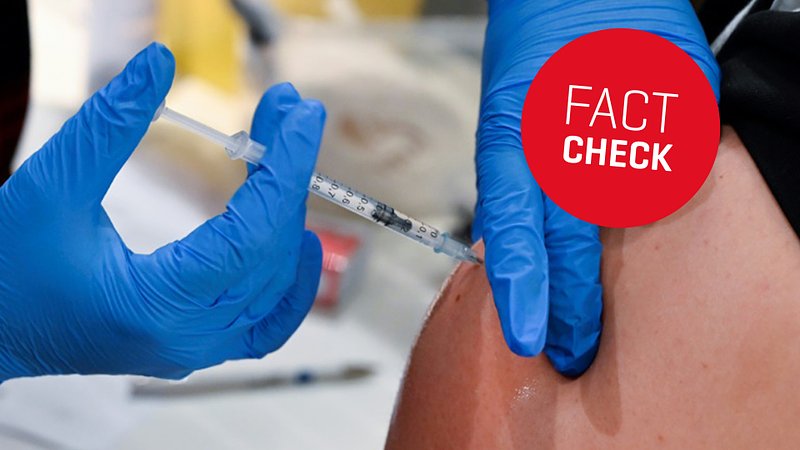 Vaccines are known to provoke undesired side effects and occasionally even deaths.

However, the number of people passing away after receiving one of the Covid jabs is not as high as represented by certain opponents of the vaccines.

Ever since the first vaccines against the novel coronavirus were approved, sceptics and opponents have been drawing attention to questionable aspects surrounding the jabs, such as the speed at which the agent was developed.

In an attempt to warn people of the perceived dangers, opponents have also been using social media platforms to spread information allegedly showing the number of people to have died from one of the vaccines.

While some posts, articles, and even websites can easily be identified as unreliable sources, there are also examples where it is more difficult to assess the validity of claims.

One such example is the website impfnebenwirkungen.net. The only piece of information relating to the operators of the site is that it is a team of analysts who process data of vaccine side effects from official sources to make it accessible to everyone interested in transparent manner.

The site publishes new reports based on data from EudraVigilance on regular basis. EudraVigilance is a database operated by the European Medicines Agency (EMA) and collects information on suspected adverse drug reactions.

On 23 July 2022, impfnebenwirkungen.net published the latest numbers of vaccine-related deaths, noting that in the European Union, more than 25,800 such cases occurred in relation to Covid-19 vaccines. According to the report, which is supposedly based on data from EudraVigilance, the Pfizer/BioNTech jab was responsible for most of the deaths.

However, this is not correct. According to an EMA spokesperson, their numbers are frequently misinterpreted and then used to misrepresent vaccine-related deaths.

Monthly EMA reports on side effects and suspected deaths

The EMA publishes a monthly report on the number of all registered adverse reactions to Covid-19 vaccines. The amount of people suspected to have died in relation to one of the jabs is however less than half of what impfnebenwirkungen.net claims. The number was just below 11,000 cases as of 4 July 2022.

More than 1.12 million people died in the EU after contracting Covid-19.

Below you can see the numbers from the Agency and impfnebenwirkungen.net in comparison.

Here below you can see the number of suspected vaccine deaths for the individual jabs authorised in the EU.

The fact that Pfizer/BioNTech has recorded most suspect cases has to do with it being the most used vaccine in the EU. The EMA also publishes regular updates on the safety of the individual vaccines. The number of vaccines used in the EU, as well as the reported side effects, can be found on the EMA website. The figures are regularly updated. According to the EMA, 892 million doses of approved Covid-19 vaccines had been administered by June 2022. With the number of suspected deaths at 11,000, this means that one in close to 81,000 doses may have fatal consequences.

According to data published by the Ministry of Health, there have been 16 suspected vaccine deaths in the Grand Duchy as of 16 May 2022.

However, just one of the sixteen deaths had a link established to the AstraZeneca vaccine. The other 15 cases were unable to be subjected to exact analysis, as the victims' families did not give authorities permission to conduct autopsies.

The Ministry of Health said "Deaths can occur as part of a mass vaccination campaign." However, this does not necessarily mean there is a link with the vaccine, the statement continues: "A temporal connection between the vaccine and a death does not imply a causal relationship."

A total of 506,344 people in Luxembourg had received a Covid-19 vaccine by May 2022, with about 1.3 million doses administered. 64% received the Pfizer/BioNTech jab, 24.4% the one developed by Moderna, and 8.4% the one by AstraZeneca. The rest of people either received the Johnson&Johnson or Novavx shots.

By May 2022, 2,353 cases of suspected adverse reactions to the vaccines had been brought to the attention of the Health Ministry. 1,590 reports were made by women and 763 by men.

1,762 side effects were categorised as "not severe". There were however also 600 cases of "severe" adverse reactions in Luxembourg. These were further split into four categories, shown in the table below.

Even if there have been 16 suspected deaths in relation to Covid-19 vaccines, the risk of dying from one of the jabs is not higher than the one of dying from a Covid-19 infection. Since the beginning of the pandemic, 1,112 people have died after contracting the virus (latest update from 28 July 2022).

Luxembourg's Ministry of Health shares an opinion with the EMA, which confirmed that the benefits of the vaccine outweighs the side effects - particularly when compared to the risk of a severe Covid-19 infection, which could lead to complications and hospitalisation.

The number of deaths in Luxembourg increased by 7.6% in 2020, compared to the previous year - however, by 2021, Statec figures showed a decrease. Almost 11% of all deaths in 2020 were linked to Covid-19, compared to 9% in 2021. The vaccine rollout was launched in the Grand Duchy in December 2020, consequently proving there is no link between the vaccine and excess death rates.

Similar numbers were reported in Germany, where authorities confirmed an excessive death rate even in 2021. For the first time since 1946, over 1 million inhabitants died over the course of a year. However, scientists were unable to establish a link between the Covid-19 vaccine and the excess deaths - on the contrary, a study from the Ernst-Abbe-Hochschule showed the death rate was lower in states with higher vaccine rates. States with lower vaccine rates experienced a higher death rate.

The number of deaths was therefore not exacerbated by the vaccine.

EudraVigilance, the EU's safety monitoring system, places great importance on monitoring reports of unwanted side effects, with databases gathering information not only of Covid vaccine side effects, but also those relating to all other medication. The strict monitoring permits the authority to remove a drug from the market, or amend the side effects on the drug's description.
However, the information from the EudraVigilance database refers to suspected side effects, instead of confirmed side effects. "The purpose of surveillance is not to evaluate each individual communication to decide whether it was triggered by a vaccine or something else," explains the EMA.

It must also be considered that the information from the database is reported by individuals, family members or people from the healthcare sector after being vaccinated with a Covid-19 vaccine. However, these are not necessarily related to the vaccine.

A conclusion about the risks and benefits of a medicine or a vaccine can only be drawn after detailed analysis and scientific assessments. In suspicious cases with a fatality, however, it is difficult to find out the actual cause of death, even if all the data and an autopsy report are available for analysis, according to the EMA.

The European database for suspected cases collects information according to the type of side effect reported. However, each individual case can elicit more than one side effect, meaning the total number of side effects will never equal the number of individual cases. This can be misrepresented by certain people in their interpretation of the data, causing the wrong numbers to be circulated as a result.
Furthermore, the number of reported cases with a fatal outcome cannot be determined from the database, meaning that the figures spread online can often be wrong.

In summary, the number of alleged Covid vaccine deaths circulating online should be viewed with a hefty dose of scepticism. Suspected fatal cases cannot all be found in public and official databases. The real numbers can only be published every month in the EMA's security reports.

Furthermore, it should always be kept in mind that the reported deaths are suspected cases. This means that the connection between the death and the Covid-19 vaccine is feasible, but it cannot be said with certainty. In addition, "just" 1 in 81,000 doses has a possible fatal outcome.