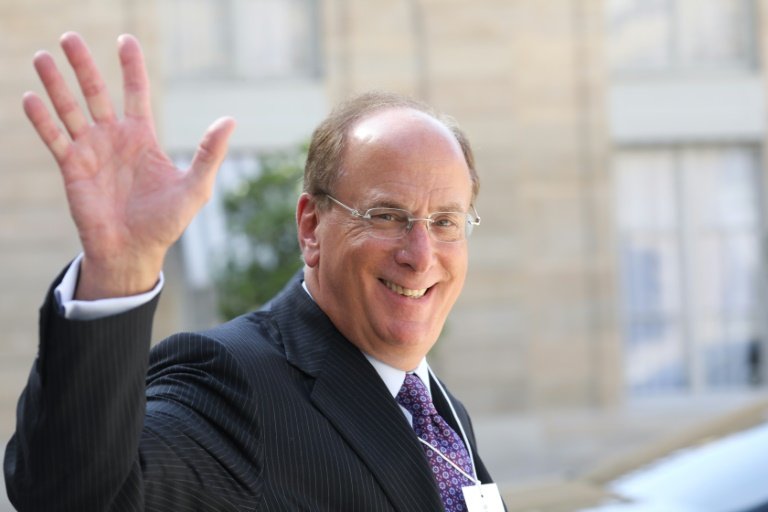 BlackRock Chief Executive Larry Fink increasingly uses his platform to address issues well beyond finance, such as racial inequality and the environment / © AFP/File

Less familiar to the general public than Warren Buffett, BlackRock Chief Executive Larry Fink has become one of the true titans of American finance.

The firm, which manages portfolios for individuals, businesses and retirement plans, has found itself a target during the contentious debate over reforming the French retirement system.

That debate comes as Fink, a bespectacled 67-year-old father of three, increasingly uses his platform to address issues well beyond finance such as racial inequality and the environment -- topics that he has argued are also central to business today.

"To prosper over time, every company must not only deliver financial performance, but also show how it makes a positive contribution to society," Fink wrote 2018.

"Companies must benefit all of their stakeholders, including shareholders, employees, customers and the communities in which they operate."

While it has publicly weighed in on proposals from French President Emmanuel Macron's government, BlackRock maintains that its participation and intentions have been misrepresented.

"We have not, in any manner, sought to influence the ongoing reform of the pay-as-you-go pension system with public authorities or any other actor in the sector," the company told AFP.

The company's input reflects its "fiduciary duty to act in the best interests of our clients."

Fink's public stances on hot-button issues such as immigration, gun control and climate change have won plaudits from some, including New York Times columnist and CNBC anchor Andrew Ross Sorkin.

"Larry Fink has been willing to address social issues and controversial political topics that most US CEOs have been unwilling to touch," Sorkin told AFP.

Fink this week announced that BlackRock would no longer invest in companies that rely on coal for significant revenue, part of a push on climate change despite skepticism of the issue in some parts of the US and BlackRock's continued investments in oil companies like Exxon Mobil and Chevron.

Charles Elson, a governance expert at the University of Delaware, said such announcements are questionable.

"When you use other people's money to advocate a position with which that they might not necessarily agree, I think that's where you cross the line," Elson said in an interview.

Elson said it is a mistake for executives to use their companies as a "vehicle for social change as opposed to a vehicle to return capital to its investors."

A supporter of Democratic candidates and fan of American folk art, Fink co-founded BlackRock in 1988 with Stephen Schwarzman about a year after "Black Monday," a bruising October 1987 session that was one of Wall Street's worst ever.

The company's mission was not only to increase the assets of its investors, but to give them the tools to manage risk.

The company's proprietary Aladdin technology analyzed financial products to determine what would happen under all types of scenarios.

In the wake of the 2008 financial crisis, US officials turned to Fink and his company to manage toxic assets that the government took control of during bailouts.

These included some $130 billion from insurer AIG and another $1.2 trillion in mortgage-related assets from Freddie Mac and Fannie Mae.

William Cohan, a former investment banker and contributor to "Vanity Fair" magazine, said Fink is without question "one of the most powerful men on Wall Street."

Some of that influence stems from BlackRock's holdings in other economic giants, including one large US bank that declined to comment on Fink because he is a shareholder.

But Fink's rise has not been without setbacks much earlier in his career.

After completing his studies at the University of California, Los Angeles in 1976, Fink moved to First Boston, an investment bank.

Fink's tenure at First Boston included a leadership role in developing subprime mortgages, the early days of a market that would grow significantly and ultimately lead to the 2008 crisis.

In 1986, Fink wagered on a rise in interest rates, a bad bet that led to his exit from the firm two years later.

Other missteps have included share purchases of Lehman Brothers three months before the investment bank folded and some ill-fated real estate investments in Stuyvesant Town and Peter Cooper Village in New York.