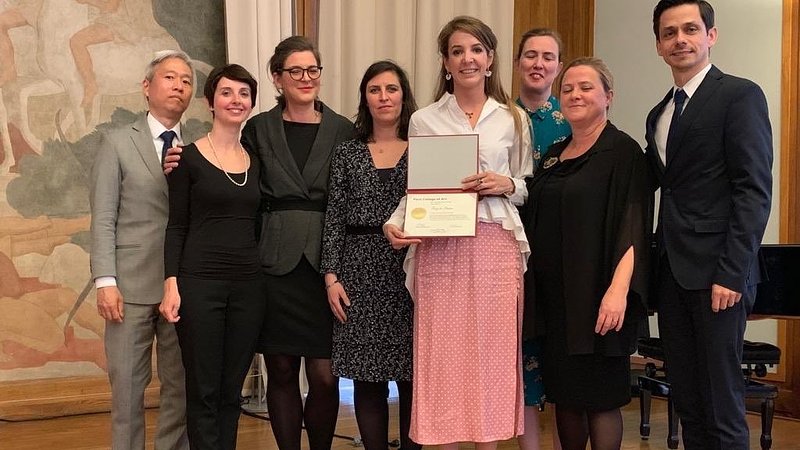 Having already received a honorary doctorate from the Paris College of Art in recognition of her commitment to charitable causes and the furthering of education around the world earlier this year, this is one of many such recognitions she has received to date.

The award ceremony will take place on Monday 9 September 2019 at Hotel Le Royal in Luxembourg city. Below follows the full justification issued by the Leadership Academy.

Award justification and bio from the Leadership Academy

"This accolade is a well-deserved recognition of an incredible female leader who sets an example and who spreads the genuine leadership attitude and principles that our Academy aims to convey to our candidates and Community. Princess Tessy leads by example, values, and through inspiration and kindness. She is raising two future leaders, and we wanted to extend this opportunity to our candidates who can learn from her what we cannot teach them with theories and in lectures: attitude! We are very proud and honored by our Leader of The Year!"

"Tessy was 5 years in the Luxembourg military where she took part in the United Nations Mission in Kosovo as part of the BELUKOS 13/15 detachment being the only female member of Her draft. She received the UN medal of recognition for this mission. Her awards include: 2012- the Order of Civil and Military Merit of Adolph of Nassau; 2016- the Mrongovius medal of recognition for her work on spreading humanistic ideas globally; 2017- the ‘Woman of the Decade Award’ from the Women Economic Forum for her work in women empowerment, security and peace; and in 2018- Toronto, the Global Empowerment Award for her work in the African regions and all around the world.

Moreover, Tessy got awarded the 'Leader of the Year 2019' from the Luxembourgish Leadership Academy and she was awarded an Honorary Doctorate (dr.h.c) from the Paris College of Arts for her work in and around education.
Tessy is a UNAids Global advocate for Young Women and Adolescent Girls, she is the patron at UNA-UK, where she holds the highest position in the organization that tackles issues of sexual violence in conflict. Moreover, Tessy is the Co-founder of Professors Without Borders, a social enterprise that aims to bring quality education all around the world.

Tessy has launched her own business and is a partner at the Butterflies Group - a global bespoke consultancy which works with governments, institutions, and individuals on a variety of projects.

Tessy holds a BA from Richmond University. Tessy achieved a first in her undergraduate dissertation that she wrote on the continuing trend of nationalism in Europe. Moreover, Tessy graduated from SOAS University with an MA. She received a merit for her MA dissertation on Biological Terrorism and Violent Non-State Actors. She is a globally recognized speaker on topics on education, women in the workforce, millennials, global health, and Impact. "