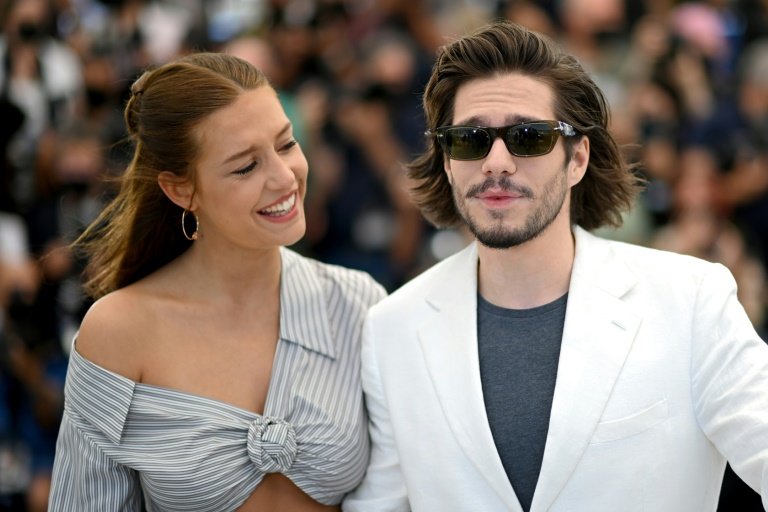 Cannes hit: French actress Adele Exarchopoulos and fellow "The Stronghold" star Francois Civil at the Cannes film festival, where the film is being premiered / © AFP

A powerful new Netflix movie about rogue detectives taking on drug dealers in one of France's toughest areas sparked controversy Tuesday at the Cannes film festival.

"The Stronghold" was snapped up by the streaming giant even before its premiere at the Cannes film festival, but its makers are already having to bat away claims that it caricatures poor, drug-riddled immigrant neighbourhoods of Marseille as no-go zones.

With France only eight months from a presidential election likely to pit Emmanuel Macron against the anti-immigrant Marine Le Pen, the makers denied they were playing into the far right leader's hands.

Director Cedric Jimenez -- who was born in a tough Marseille estate -- told AFP that hoped the film would not be used as ammunition for Le Pen's hardline security agenda.

"I don't think these problems are going to be solved by a radical vote for Marine Le Pen. I think these areas need more investment, the police need better funding.

"The lack of investment is part of what is fuelling the anger" in the inner-city areas of northern Marseille, he insisted.

Even some French critics who have given the tough action thriller rave reviews have questioned its unblinking support for the controversial police unit it portrays.

The movie is based on the true story of Marseille detectives from the BAC Nord brigade who were accused of racketeering and stealing drugs.

They claimed they used the seized drugs to pay off informants as they sought to bring down one of the drug lords who dominated the Mediterranean port notorious for its powerful underworld and armed gangs.

All the accused police were either acquitted or given suspended sentences earlier this year.

One of the three officers on which the movie centres has since returned to work and is now leading the local police union.

"The Stronghold" shows the authorities leaving high-rise estates to be ruled by drug gangs run by young men from immigrant families -- a claim frequently made by Le Pen, who is increasingly popular with French police.

Samuel Douhaire, critic for the influential French weekly Telerama, said that while he admired the movie's bravura film-making, he was worried by its "dehumanising" depiction of the drug dealers and the young men who resist a police raid on the high rises.

"You feel you are watching zombies in a video game who will keep coming forever," he wrote.

At a time of concerns over mounting police violence in France, the film's dismissal of its internal affairs investigators as pointless pen pushers was also worrying, he added.

The critic also baulked at the film's unquestioning support of the maverick officers. "While they have been partially cleared, they are still facing an appeal by prosectors," he said.

Douhaire said he also disturbed by the way Jimenez -- who previously won plaudits for "La French", another crime thriller set in his home town -- had started shooting the film, which is written by his wife, journalist Audrey Diwan, while the scandal was still being investigated.

But actor Karim Leklou, who plays one of the officers, defended their portrayal, saying critics had misunderstood the movie.

"It is very rare to have an action film that addresses social issues like this one does," he told reporters at Cannes.

"It deals with people who have been abandoned -- both the police by the top brass that has thrown them to the dogs just like the people of the estates."