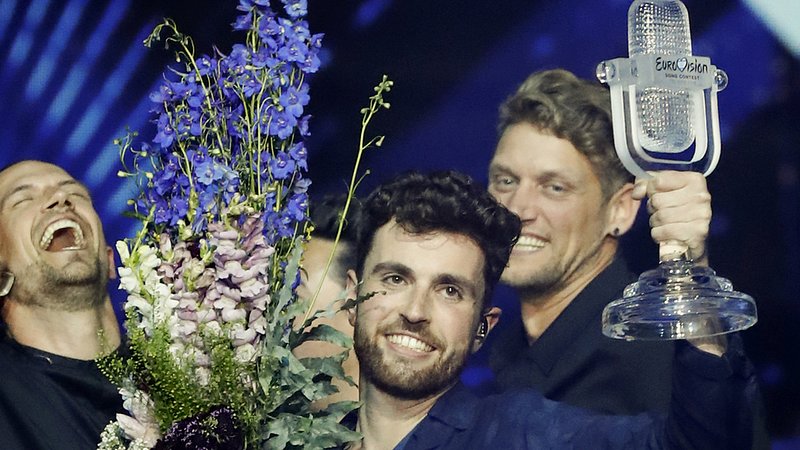 Netherlands' Duncan Laurence celebrates after winning the 64th edition of the Eurovision Song Contest 2019 at Expo Tel Aviv on May 19, 2019, in the Israeli coastal city. / © AFP archives

The European Broadcasting Union (EBU), who produce the song contest, have announced that the 2020 edition has been cancelled.

The 2020 Eurovision Song Contest scheduled for May in Rotterdam has been cancelled for the first time in the event's 64-year history due to the coronavirus outbreak, organisers said Wednesday.

Broadcasters were now in talks with the Dutch port city for it to host the event -- a glitzy pageant of songs that has millions of viewers across Europe and further afield -- in 2021, they said.

"It is with deep regret that we have to announce the cancellation of the Eurovision Song Contest 2020 in Rotterdam," the European Broadcasting Union (EBU) said in a statement.

"Over the past few weeks we have explored many alternative options to allow the Eurovision Song Contest to go ahead," it added.

"However, the uncertainty created by the spread of COVID-19 throughout Europe -- and the restrictions put in place by the governments of the participating broadcasters and the Dutch authorities -- means the EBU has taken the difficult decision that it is impossible to continue with the live event as planned."

Eurovision is the latest in a series of high-profile cultural and sporting events to be cancelled because of coronavirus, including the Euro 2020 football championships and Britain's Glastonbury music festival.

The Netherlands won the right to host Eurovision after Dutch singer Duncan Laurence stormed to victory in last year's contest in the Israeli city of Tel Aviv, and Rotterdam was named as host city in August.

A total of 65,000 people had been expected to attend nine different shows including the final on May 16 at Rotterdam's Ahoy venue. Organisers said they and Rotterdam authorities "will continue a conversation regarding the hosting of the Eurovision Song Contest in 2021."

"We are very proud that the Eurovision Song Contest has united audiences every year, without interruption, for the past 64 years and we, like the millions of fans around the world, are extremely saddened that it cannot take place in May," they added.

Europe has become the epicentre of COVID-19 with more than 3,400 deaths now recorded, according to an AFP tally, surpassing the number in Asia.

The Netherlands has itself recorded 58 deaths and 2,051 cases in total.

An official statement from the European Broadcasting Union on the #Eurovision Song Contest 2020. pic.twitter.com/b3h7akxvpF