After having talked about what went into the new record, 2019's Kind, and the thought that has to go into creating a consistent and unique live show, we discuss what Richard Jones gets up to in his spare time. Given that we do not want to go the way of the gossip nor gutter press, we are steering more toward the stories behind Rod Stewart being a keen model railway enthusiast. Jones is initially uncertain of our angle...

"I like my motorcycles, so I've got...a collect..., well, no I wanted to call it a collection, I've got three motorcycles that I am really fond of (laughs), and I go to the gym pretty much everyday, you know, to keep myself healthy. So, that's kind of what I am into at the moment."

Is fitness a necessary evil? Have years on the road taken their toll? Or is it simply a case of becoming more health conscious?

"Both Kelly (Jones) and myself, having grown up together in the valleys and having played football together for the local team - we have older brothers too, that have always been into sport or whatnot, we've always been, kind of, going to the gym. Any excess, that there may have been, kicked in during our 20s. So, going to the gym put on the back burner, so to speak. I guess I am playing catch up a little bit."

While this will sound like a PR agent's perfect scenario, it does go someway to diluting the image of a rabble-rousing rock star. Not that this was an image Jones, nor the band, have carried in any way...there have been the odd nights, obviously, and there have been demons along the way. How could there not?

These things, though, have been spoken about before.

As has the death in 2010 of Stuart Cable. His passing had a huge effect on the band and on Jones' Richard and Kelly. Something like that will take its toll and will, inevitably, set about new ways of thinking - adoption of different attitudes.

Kelly said in 2017, during an interview with NME: " We kept it very private because we were like brothers and we didn’t want to dish any dirt.” And you get the sense that this 'band of brothers' mentality is largely responsible for keeping the band together throughout the rough and the smooth.

"All that," Jones says, "is in the past, and now I am focusing on the future. Making sure that I am healthy for the coming years."

Stereophonics went from relative obscurity to going massive very, very quickly, at least in the public eye. The band themselves had been grafting for years. "The success that everybody saw was very much in the UK and western Europe, but when that success happened our label put us in different areas, so we were in America, Australia, Japan, where we were still unknown. So we kind of didn't see the fruits of our labour until we came back off the road (touring Word Gets Around) and went straight back in the studio (to record Performance and Cocktails) we had to look at the charts and on the TV to get any idea if we were doing 'well'."

In terms of an overriding memory of his time in and with Stereophonics, Jones is taciturn; "Over the twenty years, its always been trying to do the best for each song and album. Making sure that we are improving as a band. Showing people something new. And for me, the memories are attached to those songs and performing them."

So there are no specific highlights, simply a malaise of interwoven memories: "Numerous places come to mind, but these highlight the success. Home shows are great, like in Cardiff and Swansea, playing with our heroes Bowie, The Stones...people like that. It has been...if I can say 'high points' for me."

We border on a negative point, or a possibly negative point, I ask if the audience base has grown, or remained the same, and has that meant the band have had to tailor their music to fit that most pesky of demographics...the die-hards... why are Stereophonics still so popular? "I think it's just that we don't take it for granted. I think if you stay sounding the same, you're gonna keep the same audience. If you want to win new people over, you've got try different things. Change your sound. Be the best band you can possibly be."

How critical are you of yourselves and each other? "If one of us has a bad night, or a bad performance, usually it is only us that notices, the audience can rarely tell...so yeah, you have to make sure that the songs are of a really high standard. There's no real point in treading water. People can spot it when you're not being true to yourself."

As a music consumer who has seen vinyl (the first time round), cassette, mini-dics, CD, streaming, vinyl again, I was curious about how someone who has released music through that changing era has felt the shift alter their professional aims.

"Fortunately for us, we lived through the digital age and the change. We went from selling tons of vinyl and CDs to, at least part of the industry, bottoming out and see physical sales dwindle. We saw streaming come in, and the big tech companies come in. Spotify, Apple, Amazon change the model. We can't change the way progress happens BUT we CAN use it to our advantage. There's no point in complaining about something that is happening right in front of you, you just have to go with it and hopefully it works out for you."

Jones, as we have seen, harks back to integrity, honesty, hard work. Churlish folk might accuse him of over-egging the pudding, but of all the themes and feelings that permeate out chat, dishonesty is not one of them. You get the sense that Jones has suffered fools before and will not do so any longer.

"For us, first and foremost it's about us creating something honest, we are on our third label now, you know the good ones and you can spot the bad ones by now... (laughs). If you get good people working around you and it is much easier and pleasant."

When I last spoke with the band, back in 2010 maybe, there was a different man behind the drum kit - Javier Weyler. Jamie Morrison has the sticks since 2012.

When I first spoke with the band at Kulturfabrik in 2008 they had not long bedded in a new guitarist in Adam Zindani.

Where perhaps you might see other bands inundating feeds with InstaSnaps and self-absorbed profile posts, Stereophonics appear at home with their image and their footing: "Social media platforms are part of it. When they came about, we get the marketing team and the managers asking us for posts, but they only ask for 'whenever we can', but I don't see the point in taking a picture of my food or, of me at they gym, how is that interesting for an audience who want to her our music - we highlight the music and performance."

The musicians of the 50's, 60s, 70's had an air mystery, is there something to be said about not knowing everything about your favourite band? Was there a time when the mystique was for the show and private lives were private? "Our audience, when it comes to our privacy, we are careful of not being too personal...we don't post family stuff...you can't really undo what's been done, but you can mould it to what you need. If people want more, well, they can only have what we give them really."

My wife would not let me get this interview finished without asking about a 'random' incident at the aforementioned show in Kulturfabrik whereby, she claims, she (8 1/2 months pregnant) stumbled upon Richard in the shower...it's less an accusation and more a case of verifying my wife's claims..."(laughs) it probably happened, it's not uncommon, whenever we do gigs, especially if it's a sweaty environment, we have to rinse off before jumping back on the bus. We can be on the bus for 18 hours, sitting in your own sweat...so it might have happened. I can neither confirm nor deny (laughs)." 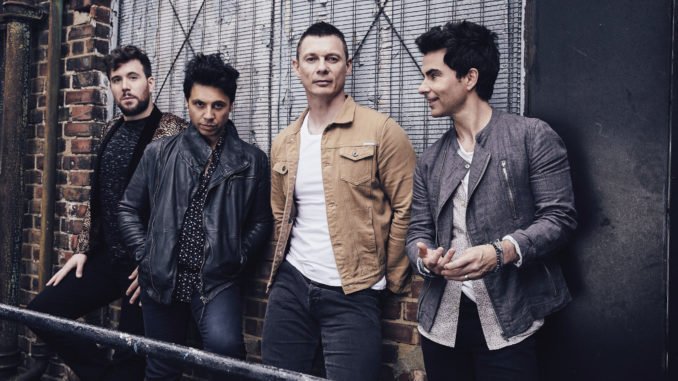 It's no secret that I am a fan of Welsh band Boy Azooga  and Jones says the music scene in his home country is as healthy as it has ever been: "The good thing about being able to put your own music out there means that there's always going to be music about. I am not sure that the live scene, with the clubs and what have you, is that healthy. As, as with most of Europe, a lot of the clubs and venues are being closed down and being turned into apartments."

Kind's album sleeve artwork is a lovely image was designed by Kelly's daughter Bootsy, something that was a happy happenstance: "usually the image comes a good six weeks after recording but Kelly had sent the picture that his daughter had done and really felt it captured the mood of the record and what we were trying to capture. The boys liked it and it kind of stuck. Its a good piece of work." 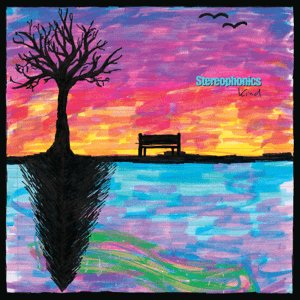 How many years have the 'Phonics got left in the tank?

"As long as people want to see us live and as long as people want to hear our music, I think we will carry on going until one of us drops. Myself and Kelly have been friends since we were born, our parents were in school together,  were were born in the same hospital a week apart, went to the same nursery, same schools, it's a weird kind of lifeline that both of us are on. And the band is the thing that connects us."

Richard and Kelly remain the mainstay of Stereophonics, yet the band has become something else entirely.