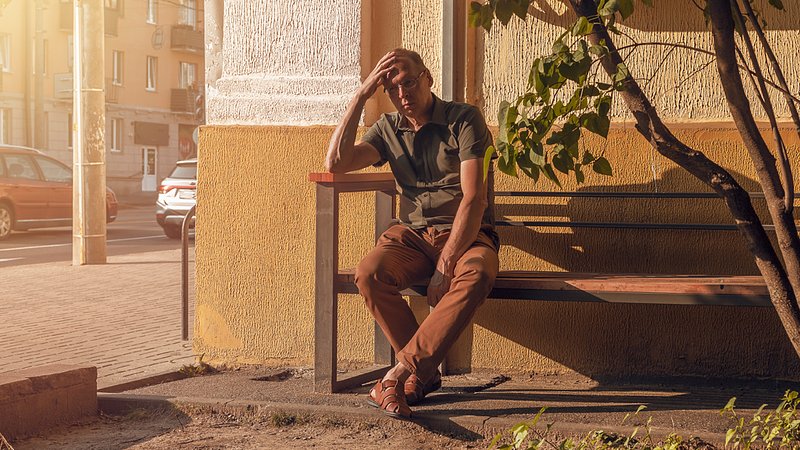 The recent heatwaves across the continent have made it clear that the climate emergency does not care about denialism. Major long-term changes are urgently needed, but there is one thing that we can change straight away: the way we present weather forecasts.

I suppose we all noticed that it's been a bit warm lately. Worryingly warm in fact, as temperature records are being broken all across Europe.

Thousands of people had to be evacuated away from forest fires in France's southwestern Gironde region. According to the World Health Organisation, more than 1,700 people died as a result of high temperatures in Spain and Portugal alone. In Italy, drinking water had to be rationed in several northern territories because of an ongoing drought. And the water of the Mediterranean sea is set to hit temperatures close to 30 °C this week.

This op-ed is not about climate change per se. There is no denying that what we are seeing and experiencing is just the beginning of what is likely to be the greatest disaster humanity has ever witnessed.

Instead, I want to talk about something quite mundane today: weather forecasts.

"Tomorrow is going to be a lovely sunny day with no clouds in sight!"

"Get ready to throw on some shades because absolutely beautiful weather is coming our way next week, folks!"

"Bad news for tomorrow, unfortunately, as it is going to be a rainy day throughout the country"

"It is going to rain tomorrow but don't worry! The sun will be back very soon"

"Praise be to the eternal Sun Lord. We dedicate our lives to the fight against the evil Rain Demon"

With the exception of that last one (probably), these kinds of statements will be familiar to you. This is the language of (most) weather forecasts: Emotional, sentimental, and riddled with clichés. And everything is based on a very simple binary assumption: sun = good, rain = bad.

This kind of language was always flawed, but it went unquestioned for a very long time. However, as the effects of climate change start to become more and more pronounced, our traditional way of presenting the weather seems at best inappropriate and at worst trivialising a very serious and deadly phenomenon.

This is an issue that is being addressed more and more frequently as of recent. The first time I was made aware of it was on 14 June, when the French journalist Marc Hay ranted about the way weather is presented in the media on live TV, stressing "I think we need to change the way we talk about this, because it doesn't make sense (…) This is going to get worse".

The clip went viral in France and reactions by meteorologists and weather presenters soon followed, practically all agreeing with Hay. Géraldine de Mori, weather presenter for the French TV station RMC, stated in an interview with France Info: "Fifteen years ago, the weather was superficial, fun and enjoyable. Nowadays, we have become aware that this is a major issue, and that the climate is changing. It has become an important and much more serious subject. It's no longer something you put at the end of the news."

De Mori went on to say that she personally will no longer refer to clear skies and sunshine as beau temps ("nice weather") or frame rainfall as a "bad" event. "People going on holiday might not like it, but we have to think about the planet," she said.

For those privileged enough to live in air-conditioned homes, endless days of sunshine might be "nice weather", but if you are, for instance, a farmer, you are desperately waiting for rain to arrive. What I consider "nice weather" might be devastating for someone else – all the more reason to abandon this romanticised view of a natural event.

Climate change is not a fun family event

This topic is about far more than just a simple semantics issue. We are in the middle of a global crisis of unprecedented proportions – and while some are still competing for the prize of most annoyingly stubborn person in existence ("It's called summer!"), a lot of people are finally beginning to realise the damage that we have done – and continue to do – to this planet.

We are in a crisis, and our messaging, especially that of the media, needs to reflect that. Writing for the Guardian in May 2022, Geography professor Saffron O'Neill made the argument that "how the media communicates about climate breakdown reflects and shapes how societies engage with the issue".

In his op-ed, O'Neill focussed on the pictures accompanying news stories about heatwaves. O'Neill was part of a study led by the University of Exeter that looked at how news of extreme heat is visually represented by the media, specifically targeting news reports from the UK, the Netherlands, France, and Germany. The study revealed that news reports about heatwaves often feature "fun in the sun" type pictures (e.g. children playing in water fountains, people at the beach…) and thus frame the heat events as something enjoyable.

Climate change is not a fun, eating-ice-cream-at-the-beach event. The effects of a changing climate will cost innumerable people their lives and render large parts of the globe uninhabitable.

Many researchers and activists have been sounding the alarm for decades, but too often they were branded as "alarmists" or "hysterical". There is no doubt that we should have done a lot more much sooner, but with climate change having a much more immediate effect on parts of the globe that had so far seen comparably little, a new chance presents itself: Getting many more people involved in climate action than ever before.

But to achieve this, we need to get the communication right first.