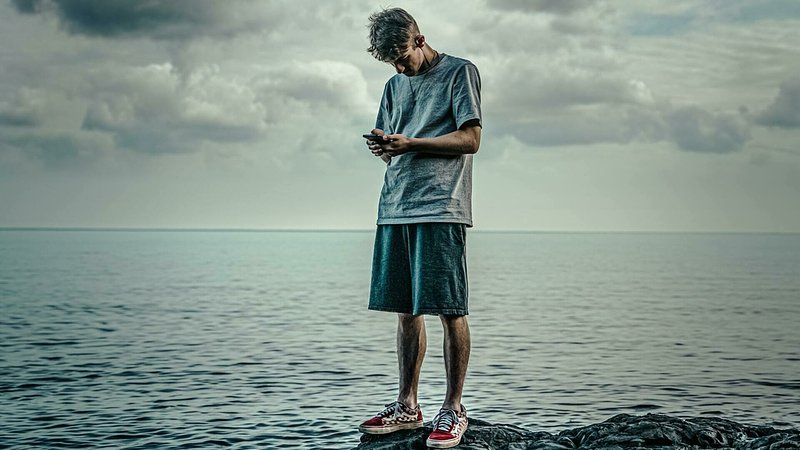 A brief inquiry that might have been pointless. Judge for yourself!

A few days ago, while working an afternoon shift for RTL Today, I came across an interview that caught my attention. The topic of discussion: the impact of the lockdown on children and adolescents. Nathalie Keipes, director of the centre for psycho-social and educational support, short CePas, was a guest at RTL Radio and talked about the irreplaceable and formative effect of authentic social interactions on child and youth development. Suddenly deprived of those contacts during the period of confinement, the use of mobile devices presented itself for once as the most efficient way to maintain both actual physical distance and a form of social proximity to friends and family members. A tool that I am certain most of us relied on during that time, not only young people. Keipes thus noted that adolescents’ elevated phone usage over the past months did not come as a surprise and could not be completely booked off as a negative due to the given circumstances. She did however raise concern over the incremental increase of social media use reported by children and teenagers over the last years and indicated that this problem needed to be included in all future health prevention initiatives.

Now why did this grab my attention? Over the past couple of years, society has been catching up to the potential implications problematic social media usage can have on a person’s mental health state, and by now it seems widely known and accepted that we should therefore be especially attentive to how much of said access we provide to children. What appears to be less obvious on the other hand is which of the behavioural changes observable between the generations directly relate to the launch of the digital social age, and which problems might be falsely connected to it. So, I thought it would be worthwhile going down this contentious rabbit hole, for the most part just to see if my personal observations and position on the issue could be confirmed, if I am being honest.

I believe I am becoming more aware of generational differences now that I keep moving further away from my teenage years and cannot help myself from occasionally thinking that things really do have changed. I then remind myself of the fact that it is just the natural cycle that society keeps repeating and that the idea of everything having been better in the “good old days” is not really a thought worth pursuing, since it appears to be highly subjective and age related. Similar to how my father was the rebellious son for listening to hard rock and heavy metal instead of folk music in his youth, and how he is now himself in a comparable position where he considers his preferred genres as standard, and nothing new ever coming close to the quality of the good old stuff.

Back to the issue. How has social media been affecting the mental health of adolescents and children growing up in the digital age? Jonathan Haidt, a US American social scientist, made two important observations about the behavioural differences observed in Generation Z, which roughly encompasses those born between the mid 1990s to the early 2010s, depending on which literature you follow. First, since 2010, the rates for anxiety and depression in adolescents have significantly increased. The 2018 National Survey of Drug Use and Health (NSDUH) conveys that the number of major depressive episodes for both boys and girls has almost doubled in the US during that period: 4.4 to 7.7% for boys, and 11.9 to 21.9% for girls. Second, members of the generation appear to be less ambitious about reaching the traditional milestones of Western societies, such as getting a driver’s license, moving out of the childhood home, or getting a job. Which is not say that those stages are not reached at all, just on average at a later point in life than was the case for previous generations.

Haidt explains both tendencies to a certain extend with the fact that members of Gen Z are the first to have grown up with devices from a very young age, whereas most Millennials had already overcome puberty when social media became a permanent aspect of our daily lives. Haidt’s line of thought in the matter is plausible and data-driven, yet it left me wondering whether he would be able to draw the same conclusions in Luxembourg, or if the situation is much worse in the US than it is here.

What about the situation in the Grand Duchy, have we been experiencing comparable generational tendencies over recent years?

I decided to follow Haidt’s approach and look at what the data indicates. Fortunately, a long-term study on the behavioural tendencies of adolescents was undertaken in Luxembourg, which is comparable to the NSDUH research project in the US. Trends from 2006 - 2018 in Health Behaviour, Health Outcomes and Social Context of Adolescents in Luxembourg elaborates on areas of improvement and deterioration, which partly overlap with those of the US. In contrast to the rising rates of anxiety and depression in adolescents overseas, Luxembourg has experienced an increase in perceived school pressure and stress, the difference being more significant for girls than for boys: from 35% in 2010 to 49% in 2018. When it comes to reported cases of multiple health complaints in that time period, the rates increased across the board for both boys (23 to 31%) and girls (43 to 49%). The study notes in that aspect that this rise correlates with a general decline in physical activity and an increase in obesity, which is not only observable in Luxembourg, but in fact a global phenomenon.

How do these findings relate to the issue of mental health? The study concludes the following: “The increase in self-reported multiple health complaints in Luxembourgish adolescents is worrying. It is known from several studies that the health complaints surveyed are an indicator of the psychosomatic health of adolescents. Accordingly, the complaints can be an early indication of more serious mental health disorders” (p. 83). It appears that although we are not yet explicitly calling it a “mental health crisis”, like it is labelled in the US, the current generation of adolescents in Luxembourg might be moving into a similar direction.

Intense use versus problematic use

Now where does social media come into play? To finally get an answer to this question, I took a closer look at another study, which provided me with a bit of clarity on one hand, and a rather surprising finding on the other.

The cross-national study Adolescents’ Intense and Problematic Social Media Use and Their Well-Being in 29 Countries, in which the Grand Duchy is represented, makes an important distinction when it comes to the link between social media and mental health: intense use and problematic use. The latter term is used to classify signs of addiction towards the digital platforms, whereas the former is used to describe elevated time periods spent on social media. In a ranking of countries according to prevalence of said categories, Luxembourg is slightly above average in intense users (34.83 vs. 34.03%), and just below average in problematic users (7.37 vs. 7.38%). 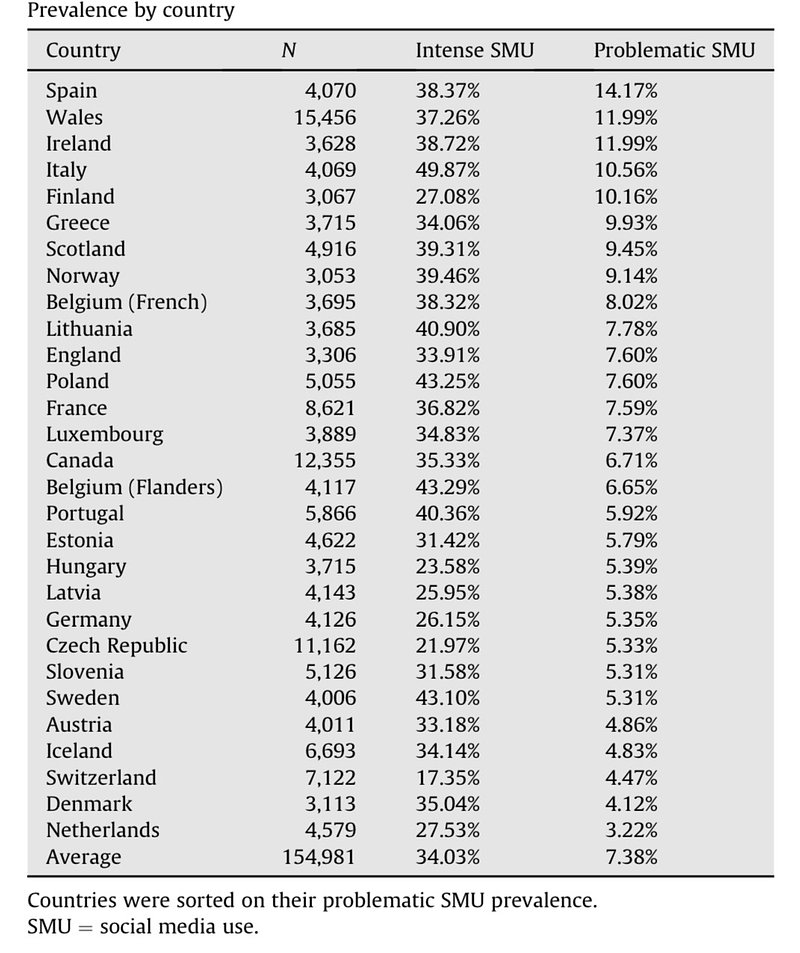 The study left little doubt about the detrimental effects of problematic social media use, noting that it was “indicative of low well-being on all investigated domains and in all countries” (p. 96), thereby showing that compulsive usage of digital platforms accounts at least to some extend for the decline in mental health. The investigated domains included mental, school, and social well-being. However, the findings also highlighted a positive association between intense social media use and higher life satisfaction, which came as a real surprise to me.  This situation is nonetheless conditioned to the general prevalence of intense users in a country, meaning that it was only observed in nations where elevated use of social media has evolved into a standard aspect of daily life. It was therefore asserted that intense usage “may often even reflect social engagement, participation, and inclusion, rather than a risk behavior” (p. 97).

I have to admit that I do not know how to interpret this information, because it raises a significant number of new questions and stands in strong opposition to my previous belief that it is best to stay off these platforms as much as possible. Does it say more about the generation that is unaware of a time without social media, or the country that standardised the tool to a degree where non-participation leads to exclusion? Does it imply that intense social media consumption is in fact beneficial to one’s happiness? And if so, how do we draw the line between compulsive behaviour? Or is the finding merely correlational and I am completely missing the point? It seems I am nowhere near an answer yet, so I will keep on digging. If I was interested in the topic before starting my research, I am now truly intrigued.

I will end for now by pointing out that I chose the above-mentioned studies for their general approach to the issue, which provided me with a starting point for further research. I would therefore like to note that especially in the Luxembourg-based study, a significant number of positive trends could also be recorded in the country’s adolescent population, including decreases in smoking, consumption of alcohol, and bullying, as well as improvements in the domains of nutrition and personal hygiene. It is important to highlight such developments and remember that there are many areas where the coming generations will far exceed those that came before them. So, I think it would be wise to hold off the term “mental health crisis” for now and find out more about the source of the tendency.