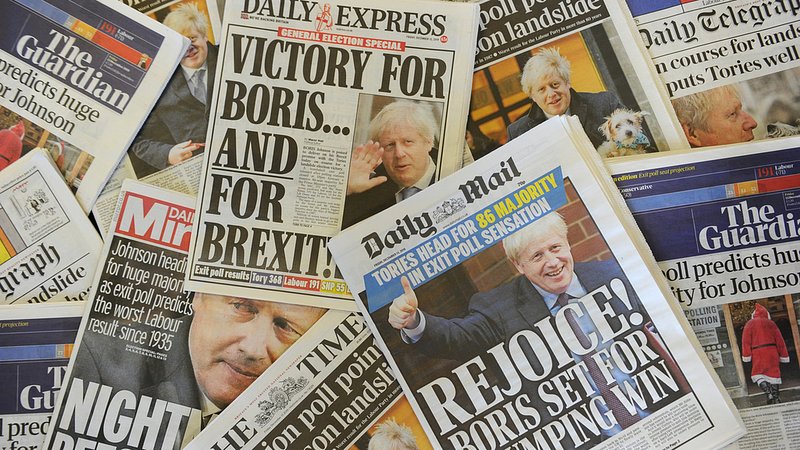 It’s finally over. Gone are the hopes of millions of Britons who rejected Brexit, who feel European and who refused to believe that this tragedy would actually come to pass.

With Boris Johnson winning a comprehensive majority in Parliament, the UK will leave the European Union.

How did this happen?

The answer is sadly clear: with Britain’s right-wing media against it, the Labour Party never stood a chance.

Nine years of Tory misrule have left Britain on its knees, with the use of food banks soaring and four-year-old children with pneumonia being treated on hospital floors.

The only way for the Conservatives to win this election was therefore to distract from their dismal record and make everything about Brexit.

Boris’s campaign managers kept him hidden from the public view as much as possible and instructed him to say nothing bar ‘Get Brexit Done.’

When he was allowed out, he often performed disastrously, stealing journalists’ phones and hiding in fridges in the last two days of the campaign alone.

But none of this mattered, because Johnson was aided and abetted by a media that was all too happy to focus solely on Brexit due to its absolute terror of Jeremy Corbyn.

Corbyn has been a controversial leader of the Labour Party, rightly criticized for his failure to deal with anti-Semitism, whose promise to lead a country for the many, not the few had proved popular in 2017.

For the billionaire owners of the British media whose profits have continued to soar even after the 2008 financial crisis, a Labour agenda targeting the gross economic inequality in British society constituted a serious threat to their position.

And Brexit was the perfect foil to keep Labour out, with the party hopelessly divided between its younger, cosmopolitan Remainers and working-class Leave voters.

Britain’s largest newspapers, Rupert Murdoch’s Sun and Viscount Rothermere’s Daily Mail, duly spent the whole election demanding that voters do their duty and save Brexit by backing Boris, without a word on the disastrous policies of the Conservatives since 2010.

It’s worth remembering that since 1974, only Tony Blair has won an election for the Labour Party – and he was backed by the Tory press because he promised not to take them on.

The Guardian, the finest newspaper of the British left, has a daily readership of only 134,000. And the great promise of social media as a tool to reach voters directly has largely failed to materialize so far.

The sad result of such a pliant and partisan media is a political landscape in which barefaced lying, such as Johnson’s promise of 40 new hospitals or 50,000 new nurses, is now perfectly acceptable.

And until the British left can produce a media outlet to challenge the Tory press, it is hard to see how anything will ever change.

Having convinced the British public that Brexit will solve their problems (reality check: it won’t), the owners of the British media will continue to prosper under a Conservative Party that is financed by billionaires, while the poor only get poorer.

This truly was a tragic night for the United Kingdom.