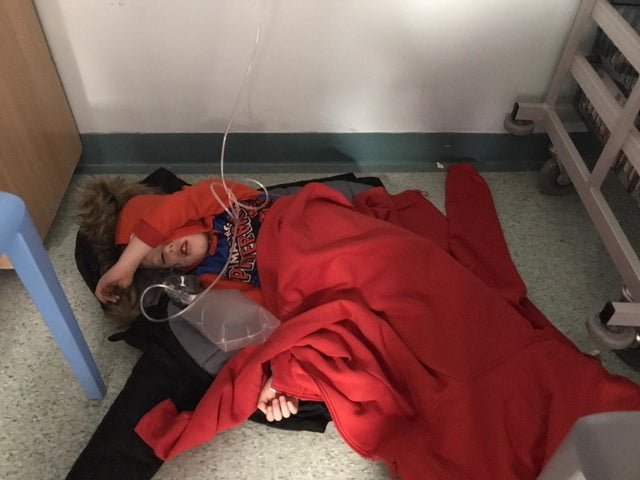 A photograph of a young boy from Leeds forced to sleep on the floor due to a lack of beds at the hospital is making the rounds in the media - and serves as a painful reminder of the NHS's shortages.

4-year-old Jack was rushed to Leeds hospital on 3 December with suspected pneumonia, the Yorkshire Evening Post reports. The young boy was reportedly left in a clinical treatment room and had to lie on the floor wearing his oxygen mask.

Jack's mother Sarah explained that "the hospital staff were "all as helpful as they could be" but "there simply aren't enough beds to cope with the high level of demand." She concluded that the "NHS is in crisis."

Jack was reportedly first placed on a bed in the Paediatric Emergency Department but had to leave due to an emergency arrival. "He spent eight and a half hours in A&E, more than twice the required waiting time which is normally four hours. Jack wasn't provided with a bed on a ward until 13 and a half hours later," the child's mother added.

The Chief Medical Officer said that they very extremely sorry and explained that the hospital has seen "a significant increase in the number of people visiting our Paediatric Emergency Department, and this week we saw the highest attendances we have seen since April 2016." The chief executive of the hospital reportedly offered a personal apology to the mother.

ITV's political correspondent Joe Pike challenged Boris Johnson to look at the image of Jack on the floor. The request triggered a curious reaction: the prime minister grabbed the reporter's phone and put it into his pocket for a part of the interview. Johnson only actually addressed Jack's situation after the reporter pointed out he had pocketed the phone.

Tried to show @BorisJohnson the picture of Jack Williment-Barr. The 4-year-old with suspected pneumonia forced to lie on a pile of coats on the floor of a Leeds hospital.

The PM grabbed my phone and put it in his pocket: @itvcalendar | #GE19 pic.twitter.com/hv9mk4xrNJ

Shadow Health Secretary Jonathan Ashworth responded to the footage by saying: "Refusing to even look at an image of a child suffering because of Conservative cuts to the NHS is a new low for Boris Johnson. It's clear he could not care less.

"Don't give this disgrace of a man five more years of driving our NHS into the ground. Sick toddlers like Jack deserve so much better."