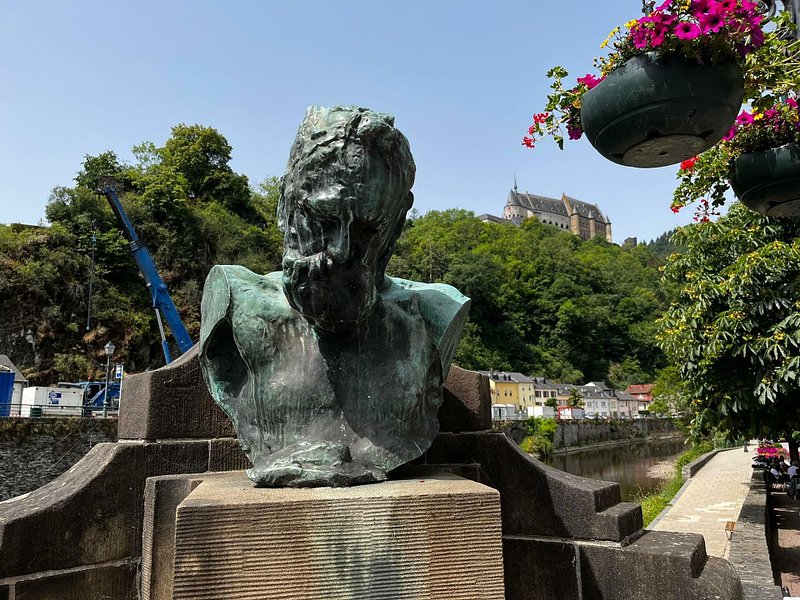 Victor Hugo's bust which you can find on the main bridge in Vianden, next to the Victor Hugo House, his former living quarter. / © Alannah Meyrath

I'm pretty sure you all know the musical 'Les Misérables' or the Disney film 'The Hunchback of Notre Dame', but did you know that the author whose works inspired these films stayed in the Grand Duchy for a considerable amount of time?

We are of course talking about Victor Hugo, one of greatest and best-known French writers.

While I was looking for a topic for this week's knowledge bite I stumbled across this article from 2020 that lists Victor Hugo's stay in Vianden as one of their fun facts, but does not provide a lot of information.  As I am living close to Vianden, and drink the occasional Hugo cocktail in a restaurant named after Victor Hugo, I thought I would take this upon me. I think you can sense a theme here.

But before we begin with a brief biography of Victor Hugo, I just wanted to emphasise that even though the coincidence of the cocktail name is quite funny, it has nothing to do with the famous writer.

Victor Hugo (1802-1885) was a French poet and novelist who, after training as a lawyer, embarked on the literary career. He became one of the most important French Romantic poets, novelists and dramatists of his time, having assembled a massive body of work while living in Paris, Brussels, the Channel Islands and of course Vianden.

Outside of France he is mostly known for 'Les Misérables' and 'The Hunchback of Notre Dame', which have seen tremendous successes, even more than a century after he died.

So how did Victor Hugo find his way to the small town of Vianden?

To answer this, we have to take a closer look at Hugo's political views. Next to being a writer, Hugo was deeply involved in politics, which established him as a national hero, but also forced him to leave his country and live in exile for around 19 years.

He was elected to the National Assembly as a conservative, but broke from his party and professed his more liberal views on issues such as social injustice, press freedom and the abolition of capital punishment. Issues his work also touched upon. When Napoleon III took absolute control of France in 1851, he abolished their democratic system of government. For this, Hugo labelled him a traitor to his country. His remarks rendered him unwelcome in his homeland and he was forced into exile. Hugo's exile lasted until the return of liberty and the reconstitution of the republic in 1870. Enforced at the beginning, exile later became a voluntary gesture and, after the amnesty of 1859, an act of pride.

Next to staying in various places like Brussels, Jersey or Guernsey, he travelled around.

It was also during his exile that he produced the most extensive part of his writings as well as the most original ones, bringing us once again back to his work 'Les Misérables', his most notorious work. 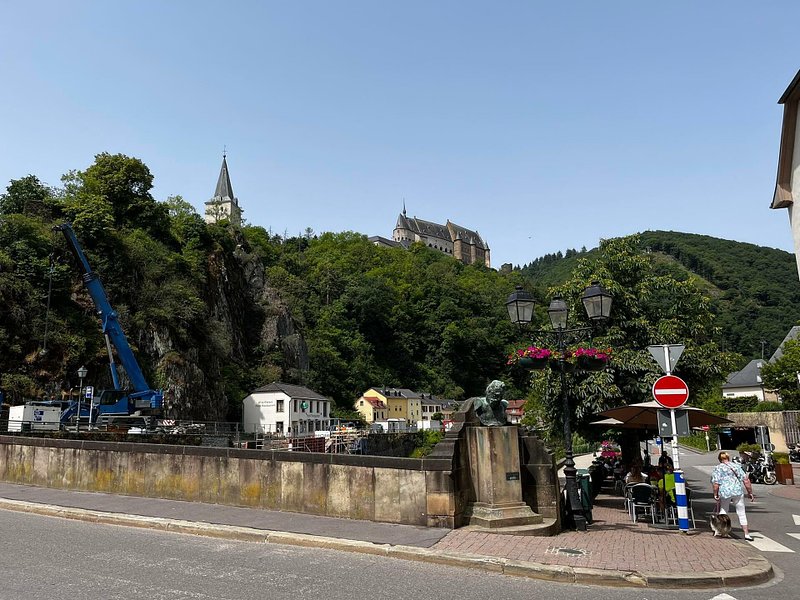 The view from Victor Hugo's old living quarters. It has a clear view towards the Vianden Castle. / © Alannah Meyrath

Although his stay in Vianden didn't include working on 'Les Misérables', he wrote about 50 poems while staying there. In total, Hugo stayed in Vianden four times, first time being in August 1862, when he was passing through the Ardennes when he stumbled upon Vianden and was delighted by the imposing scenery. And speaking from someone who is still amazed by the castle every time she goes there, he was absolutely right. His second stay was in 1863, with the third following in 1865. But it seems that his last stay in 1871, was the most crucial one.

He arrived in May and put his family up at the Hotel Koch while he himself took up residence on the first floor of the neighbouring house, next to the main bridge. From his window he saw the majestic outline of the castle and he watched the busy activity of Vianden's inhabitants. "Vianden, he wrote, embedded in a splendid landscape, will be visited one day by tourists from the whole of Europe, attracted both by its sinister but magnificent ruin and by its cheerful and happy people." Once again, Hugo hit the nail right on, with Vianden being one of the main tourist spots in the Grand Duchy nowadays.

His stay this time took considerably longer and there has been documentation about Hugo taking charge of extinguishing a fire in July 1871. He actively joined the firemen by organising a line of fire buckets all the way down to the river Our. Apparently he also fell in love with a young eighteen-year-old woman by the name of Marie Mercier. She was also a republican activist and fled her home country of France. She started working for Hugo and went back to France in 1872. She and Hugo stayed in contact until 1878. 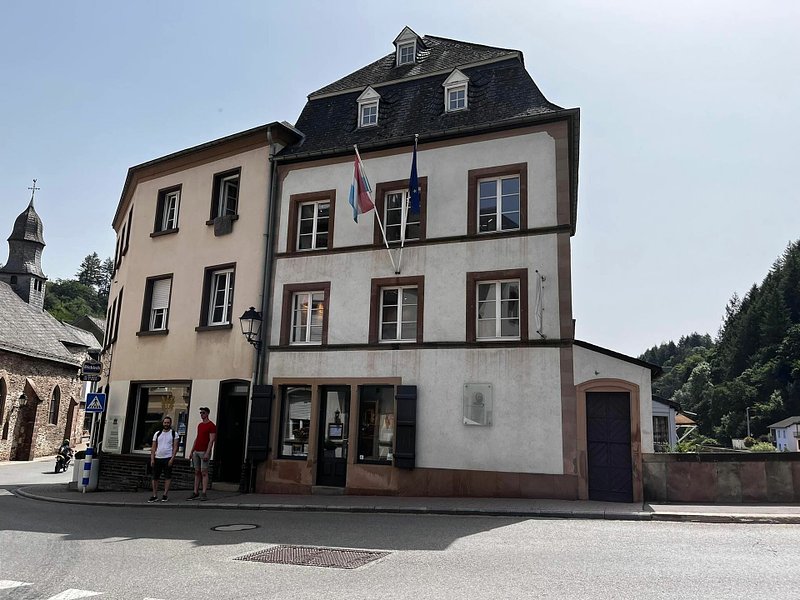 The Victor Hugo House and its museum in Vianden. / © Alannah Meyrath

The house Hugo stayed in during 1871 is known as the Victor Hugo House and is now a UNESCO World Heritage Centre. It contains the museum that was first conceived of on 30 June 1935 when a Victor Hugo committee was formed. The museum gives an insight into his life and work, and displays his original furniture and artefacts.

Vianden is always worth a visit, and maybe now you have another additional incentive to make your way up to the beautiful North.