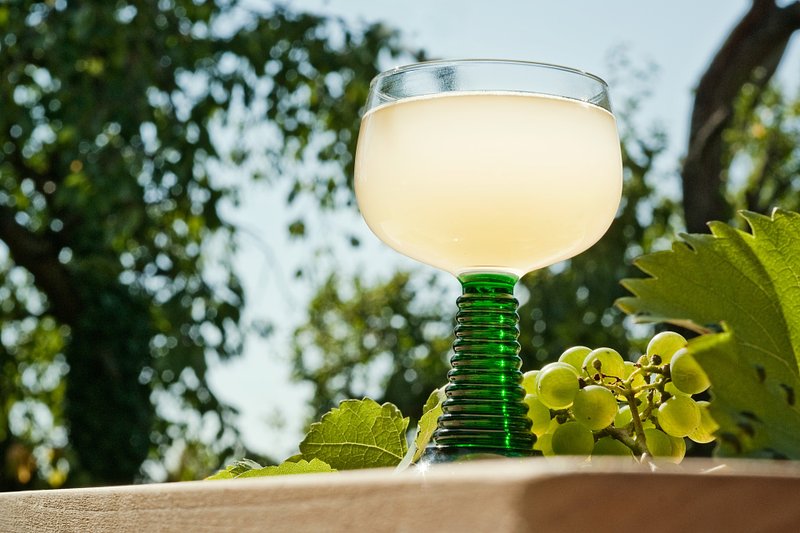 For about one month, usually between late September and Halloween, a peculiar beverage is widely available across the country, with some bars in eastern Luxembourg putting out signs proclaiming: "De Fiederwäissen ass do!" ("The Fiederwäissen has arrived!"). But what exactly is this cloudy drink and what is it that makes it so different from 'normal' wine?

The arrival of the first Fiederwäissen (literal translation: "feather white") is a bit like an early Christmas season for the residents of Luxembourg's Moselle region. Eagerly awaited, it is a cultural event that lasts roughly a month before it slowly gives way to the equally popular mulled wine and eggnog.

Across continental Europe, the milky white (and sometimes red) beverage is known by many names. In most German-speaking regions, the term Federweißer or Federroter (depending on whether white or red must was used to make it) are used, while in Austria, both versions are known as Sturm (lit. "storm"). In some parts of southwest Germany, Franconia, Switzerland, and in South Tyrol, the drink is known as Suser or Sauser. Other terms include Rauscher, Bitzler, Bremser, vin bourru, or vino nuovo, but there are many, many more!

The Luxembourgish term Fiederwäissen is obviously related to the German Federweißer, and it is said that the name comes from the yeast cells which are still very much visible in Fiederwäissen and resemble little white feathers.

So, now that we have sorted out the semantics, let's get to the meat of the matter: What is Fiederwäissen anyway? How is it made and, most importantly, how is it best enjoyed?

I. The wine that 'lives' - How Fiederweissen is made

At its most basic level, Fiederwäissen represents the earliest stage of the winemaking process. After the harvest, grapes are pressed and yeast is added to the juice, which accelerates the natural fermentation process.

During fermentation, the sugar inside the grapes is broken down into alcohol and carbon dioxide. A winery may start to sell the beverage as Fiederwäissen as soon as an alcohol content of 4% has been reached.

This sets Fiederwäissen apart from all other alcoholic beverages, as it is essentially a drink that will continue to ferment inside the container you bought it in. For this reason, Fiederwäissen is never sold in airtight bottles or cans since the ongoing production of carbon dioxide would otherwise cause the container to burst.

If you buy Fiederwäissen, you should store it in an upright position, as the gas might otherwise lead to spilling, and make sure to consume it within a few days of purchase. At the end of their fermentation process, most types of Fiederwäissen reach an alcohol content of around 10%, although some may also reach up to 13.5%.

In the past, transporting Fiederwäissen over long distances was a near-impossible feat, precisely because of the continuous fermentation. The process can be slowed down by cooling the drink, but since refrigerated vehicles were not really available for the longest time, Fiederwäissen used to be limited to the winegrowing regions themselves.

Although in theory, Fiederwäissen can be made from any grape variety, the most popular choice among Luxembourg's wineries is Rivaner. Red grapes can also be used to make the drink, but this is much less common, especially in Luxembourg.

In Luxembourg's winemaking towns and regions, people like to refer to Fiederwäissen as a "time bomb". And indeed, it is a common occurrence that people, especially those who never heard of Fiederwäissen before, have a rather bad experience with this drink. Don't be fooled by its lovely sweetness and the quenching sparkle: Fiederwäissen packs a punch and has a tendency to sneak up on you when you least expect it.

Traditionally, Fiederwäissen is served with Zwiwwelstaart ("onion cake" made of steamed onions, diced bacon, cream, and caraway seeds) but any savoury or hearty dish will pair nicely.

Besides being a refreshing drink to kick off the autumnal season, Fiederwäissen also acts as a sort of "sneak peak" into the upcoming vintage. According to Domaines Vinsmoselle, the fermentation process is completed by two thirds in Fiederwäissen. In general, the sweeter and fruitier a Fiederwäissen is, the more you can expect from next year's wines.

Since Fiederwäissen is slightly cumbersome to store at home and needs to be consumed quite quickly, it is usually more common to enjoy it at a bar or café. While it may be more difficult to find in other parts of the country, Fiederwäissen is available nearly everywhere in Luxembourg's winegrowing regions along the Moselle River over the course of October. So, why not get a taste of the 2021 vintage today and start off autumn in a very local way?