Widely regarded as one of the most lavishly ornated gospel books ever crafted, the Codex Aureus is a mesmerising sight to behold. Produced by the monks of the Abbey of Echternach between 1030 and 1050 AD, this masterpiece of medieval book illumination was unfortunately lost to the country in the revolutionary struggles of the 19th century.

If you've ever visited the Grand Duchy's oldest town, you might have already caught a glimpse of Echternach's impressive abbey, an institution which was considered among the most influential abbeys of northern Europe during two separate "golden ages": during the early 9th century, and under the direct control of Charlemagne himself, as well as during the early 10th century, following the reunification of the Holy Roman Empire under Otto the Great.

The Abbey of Echternach was particularly well-known for its scriptorium, that is, its incredibly talented scribes. One of the Abbey's most famous creations is the 'Golden Book' of Echternach, the Codex Aureus.

The book's front cover is a treasure binding, which predates the creation of the Codex itself by about 50 years and is attributed to a workshop located in Trier. It is assumed that the cover was bestowed by Empress Theophanu and her son Emperor Otto III. Jesus' crucifixion is shown on an ivory plaque in the centre of the cover. The ivory plaque is surrounded by intricate decorations made up of gemstones, pearls, enamel tablets, and gold reliefs. 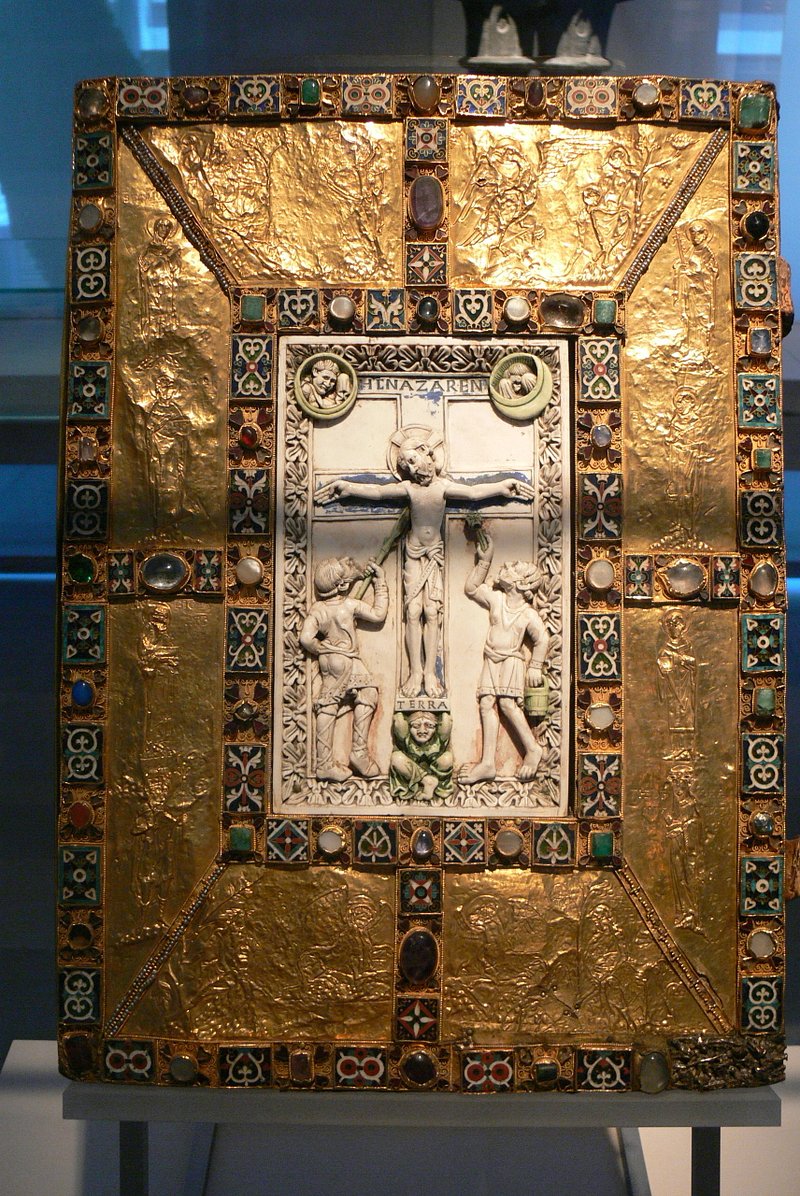 Among the people depicted on the cover's gold reliefs are St Wilibrord, who founded the Abbey of Echternach, as well as Benedict of Nursia, who established the Ora et Labora principle followed by countless monastic communities across Europe.

The Codex Aureus is written entirely in gold ink. It contains the Latin ('Vulgate') versions of the four gospels as well as two preambles. In total, it features 60 pages of pictorial decorative work and over 500 initials. In sheer numbers, this puts it above any other manuscript of the same era and second only to the Golden Gospels of Henry III – also created in Echternach.

Several illuminators worked on the book, each highly skilled and unusually creative for their time. The so-called "carpet pages" imitate the patterns and material of Byzantine or oriental silk fabrics to an astonishing degree and are described by the Germanic National Museum in Nuremberg as being "among the most unusual of their kind to be found in book illumination".

From abbey treasure to artefact in a German museum

The Codex was created for spiritual use by the monks in Echternach. It remained at the Abbey until the time of the French revolution.

Revolutionary France ended up annexing Luxembourg during the War of the First Coalition in 1795, leading to the seizure and dissolution of the Abbey of Echternach. The majority of the monks managed to flee and take some of the monastery's treasures with them, including the Codex Aureus. The Golden Book ended up in the German town of Erfurt and was eventually purchased alongside two other manuscripts and five incunabula (an early form of prints) by Ernest II, Duke of Saxe-Gotha-Altenburg in 1801.

The Codex remained in the library of Castle Friedenstein in Gotha until 1928, when it was integrated into the "Duke of Saxe-Coburg-Gotha Foundation for Art and Science". It was eventually transferred to Coburg alongside other art objects in the possession of the duke's family in 1945.

In 1955, the Codex Aureus was put up for auction, as the House of Coburg-Gotha was facing financial struggles. Since Luxembourg's government at that time either did not want or was unable to pay the required price, it was purchased for 1.5 million Deutsche Mark (DM) by the Germanic National Museum in Nuremberg on 9 May 1955, where it remains to this day. At the time, it was the most expensive book ever purchased by the German state. The funds were contributed jointly by the German Federal government and the Federal states, with Bavaria contributing the largest share.

Facsimiles of the manuscript are usually used for exhibits, but the original has been briefly put on display during two special exhibits in 1982 and 2007 respectively.

While the original remains in the possession of the Germanic National Museum, Luxembourg has several copies of the facsimile edition. One of them can be seen at the Abbey Museum (Abteimusée) in Echternach.