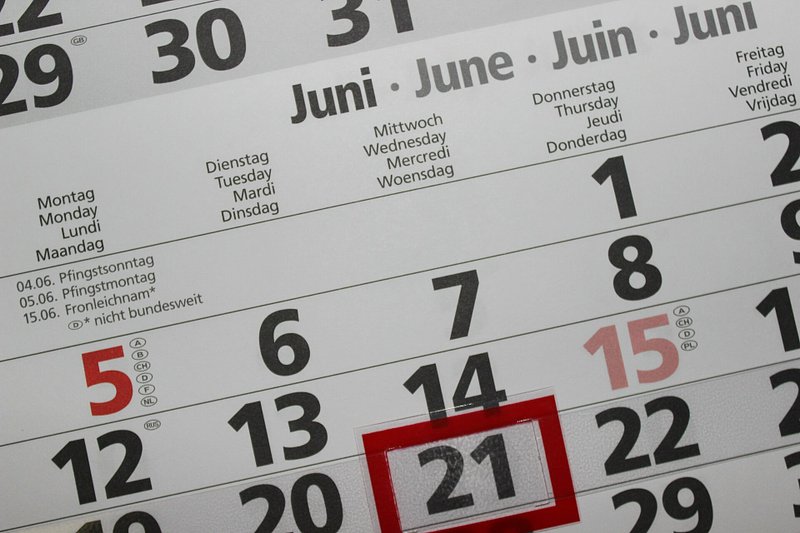 We all know January, February, March and all of their siblings. But what about Spierkel, Broochmount, or Huewermount? Many years and decades ago, Luxembourgish actually had its own names for the twelve months of the year.

Some of you might have a so-called "Postman's Calendar" (Bréifdréieschkalenner) at home. Post Luxembourg usually distributes them for free to all households and besides being a lovely gesture, this particular calendar is actually somewhat of a linguistic stronghold. If you look at it more closely, it actually features not only the standard names for the twelve months of the year, but also some rather peculiar Luxembourgish names.

Most of them have died out, and it is highly unlikely that they will ever come up in conversation. However, if you would like to impress your Luxembourgish colleagues and friends with your knowledge about the local culture and history, remembering one or two of these might be a really handy way to do so.

The name Haartmount (lit. translates to "hard month") is related to similar designations in the German language, such as Hartmonat or Hartmond. However, while the German variants could also refer to months other than January, depending on regional usage, the Luxembourgish Haartmount has generally always been used to refer to January.

The meaning of this name might seem obvious at first and generally, it is indeed accepted that the name refers to January being a "hard" month, either because the winter conditions make life "hard" or quite simply referring to the "hard" snow and ice covers that people observed at this time of year.

However, there is actually some debate among linguists, the details of which go way beyond the scope of this article. Suffice it to say, there is an argument to be made that the Old High German word hertimānōd (which eventually evolved to Hartmonat or Haartmount respectively) might actually have evolved itself from a different word, which would lead to the original meaning being more in the vein of something like "month of change". If this is the case, the name could then potentially be connected to the winter solstice. If you can read German and are – for some reason – really interested in German linguistics, then you can read about this in great detail on infolux.uni.lu

Spierkel is without a doubt one of the most peculiar of the old Luxembourgish names for the months. It is thus also no wonder that the etymology behind it is just as fascinating.

Basically, there are two main lines of interpretation when it comes to this name. The first is to see its origin in the Proto-Indo-European (PIE) *(s)p(h)ereg, meaning "to twitch, spring, shoot up" or also "to sprinkle, burst, spray". The name Spierkel would then carry the idea of the sprouting of buds or, to put it in the words of linguist Karl Weinhold, "the jumping, bursting force of the bustling spring, which penetrates the winter cover". This would also establish a link between Spierkel and the English word spring, which goes back to the same PIE root.

The second interpretation sees a more spiritual origin in the name. The term spurcalia can be found in Latin sources from the late 7th/early 8th century and describes a cleansing and sacrificial offering celebration which took place in February. Theories range from Spurke being the name of a Germanic goddess (which would make the celebration Germanic in origin) to spurcalia being a derogatory term used by the clerical elite to describe a Roman cleansing celebration. Counterpoints to both of these theories are that there is no actual evidence that would suggest the veneration of a goddess called Spurke, while the Roman origin is questionable since the term cannot be found in any of the Romance languages, leading linguists to believe that it was most probably a reinterpretation by Latin historians.

Again, if you can read German and want to dive into the linguistic details, infolux.uni.lu has got you covered.

March was referred to by two different names by Luxembourgers of the olden days: Aussenzäit (lit. translates to "outdoors time") and Lenzmount.

Aussenzäit quite simply referred to the fact that due to the arriving spring, farmers were spending increasing amounts of time outdoors and let their kettle out onto the meadow again.

The second term Lenzmount is related to the archaic German word Lenzing, with lenz meaning "long" and the second part -ing being a shortened suffix carrying the meaning of "day", so "long day". Lenzmount thus referred to the month in which the days started becoming "longer" again.

Both of April's former names are very self-explanatory: Ouschtermount (lit. translates to "Easter month") and Fréileng (an archaic form of Fréijoer, meaning "Spring").

While Päischtmount (lit. translates to "Pentecost month") evidently refers to the Christian Pentecost celebration (holiday which celebrates the descent of the Holy Spirit upon the Apostles and other followers of Jesus Christ), the Oktavmount is a reference to the very Luxembourgish tradition of the Octave pilgrimage. The well-known expert in Luxembourgish language and folklore Alain Atten points out that this name could only have come up in the late 17th century at the earliest, as the Virgin Mary was only named Patron Saint of Luxembourg City in 1666 and Patron Saint of all of Luxembourg in 1678, leading to an increase in popularity of the Octave celebrations.

Bléiemount, another variant of this month's name, can be translated literally to "month of blooms".

The names for June and July need to be analysed side-by-side because they have a particular quirk among the old Luxembourgish month names.

Broochmount means something in the vein of "month of fallow land" while Heemount can be literally translated to "hay month". According to Atten, both names could be used to designate both June and July because they referred to specific agricultural activities. Making hay in particular required a long period of dry weather in the days when people did not use machines to do this work. On the other hand, ploughing fallow land was less depended on meteorological conditions. Especially in northern Luxembourg, Broochmount often referred to July while Heemount was used for June.

Atten also mentions another name, or rather a phrase, that was used to refer to the time before the month of August: tëscht alt an neit ("between old and new"). The meaning of this phrase is "between old and new bread", as it originated in a time when most people still made their own bread at home.

Of all the old names, it is probably Karschnatz that most Luxembourgers still remember as an alternative name for August. Atten names other variants as well, such as Broutschnatt. They all referred to the same "event", however, namely the yearly harvest, specifically the rye harvest (Kar is the Luxembourgish word for "rye" and -schnatz or -schnatt carries the meaning of "cutting").

According to the Luxembourgish Dictionary (Luxemburger Wörterbuch), Karschnatz can be used as a designation for the overall harvest period, the harvest itself, and as an alternative name for the month of August. There are also sources that suggest that Karschnatz was also the name of a folkloristic dance in Luxembourg. The dance allegedly imitated the movements of farmers sowing, cutting, and binding ears of corn.

While some Luxembourgers might have heard the term Karschnatz before, it is almost certain that the large majority will give you a puzzled look when you ask them about Huewermount as the old Luxembourgish name for the month of September. Even the 2021 Postman's Calendar simply refers to September as Hierschtmount ("autumn month").

We have just learned that Karschnatz referred to the annual rye harvest and the term Huewermount follows that same sort of idea. Huewer is the Luxembourgish word for "oats", and thus the name Huewermount ("oats month") quite simply refers to the annual oats harvest, which in the olden days usually took place in September.

Regarding Huewermount, Atten points out that Huewer is not even the original Luxembourgish term for oats. The archaic term, which goes back to the Middle Ages, is Iewen or Ewen and this is why very old documents (written in German) refer to September as Ewenmande. According to Atten, this little linguistic nugget is a perfect reminder of Luxembourg's particular language and border situation, as the old term was likely derived from the French avaine (a regional variation of the metropolitan French avoine used in the Belgian region of Wallonia) while the "new" term is very clearly related to the German Hafer.

The Luxembourgish name for October is once again a reminder of how things have changed over the past years and decades. Wäimount (lit. translates to "wine month") was its former name and it referred – no surprises here – to the annual grape harvest, mainly in eastern Luxembourg. It is a reminder of change because, as wine enthusiasts or those living in the Grand Duchy's wine region know, the grape harvest nowadays starts in September.

Regarding October, Atten notes that Liesmount would be an even "more" Luxembourgish name for the month. Both in Luxembourgish and in German, grapes are in fact "read" (the Luxembourgish verb liesen means "to read" but in the context of wine making, it takes on the meaning of "to harvest").
Example:

= The wine makers are harvesting the grapes

Both the Luxembourgish liesen and the German lesen have evolved from the Latin verb leggere which had the double meaning of "to read" and "to collect". The second meaning has thus been preserved in modern wine culture in countries with Germanic languages.

The Postman's Calendar usually cites either Wantermount (lit. translates to "winter month") or Allerhellegemount (lit. "All Saints Month) as the old Luxembourgish names for the second-to-last month of the year. However, Atten points out that Wantermount is a very general term that could be used to refer to any of the cold months and that there is actually a much more specific name for November.

Mainly used in northern Luxembourg, the name Reismount came from the archaic Luxembourgish verb reisen, meaning "to fall down" (as in leaves) or "to descend" (as in fog or mist). Considering this name, it once again becomes clear that people in the olden days simply named months after meteorological conditions that they could observe at that time of the year. This also means that Reismount could also refer to October, with Atten also stating that people were not really bothered about when the month started: Once they saw leaves falling, or fog descending upon their towns, Reismount had started.

The final name on this list is once again very self-explanatory. The old Luxembourgish name for the month of December was quite simply Chrëschtmount (lit. "Christmas Month").

While the old Luxembourgish month names may not have any "practical" uses anymore, it is still quite insightful to read about them. All of them allow us to take a glimpse into a very different time and a very different country as well. A country marked mainly by agricultural activity and the occasional religious festivities.

This article drew heavily on the excellent research by Alain Atten. If you are looking to improve or train your Luxembourgish listening comprehension, his "Sproochmates" series, which he records for RTL Radio, is a highly insightful source of cultural and linguistic knowledge. However, you should already have quite an advanced level of Luxembourgish before tackling this series.