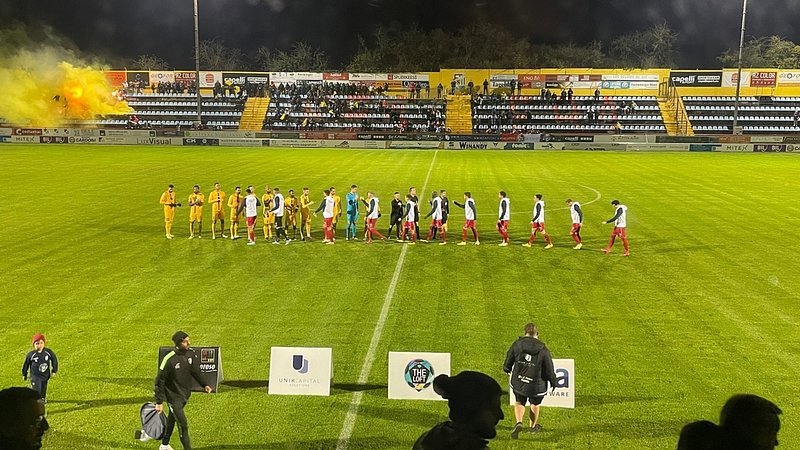 Overall, the latest gameweek did deliver, with plenty of high scoring games and late drama at some games, even though the main event ended up being way too one-sided in comparison to our expectations in the lead-up to the game. All the most notable talking points of Sunday afternoon below!

On the one hand, we are luckily blessed with a number of options to fill this column. On the other hand though, this week’s marquee match-up was easy to determine even before the early afternoon games kicked off, as the attention was always going to be focused on the epic clash between two seemingly unbeatable powerhouses, F91 Dudelange and Swift Hesperange. Eventually, more than a thousand fans turned up at Stade Jos Nosbaum in Dudelange.

The starting XI’s struck few surprises, with experienced veteran Vova’s inclusion in place of Charles Morren being already justified by frequent recent BGL Ligue opportunities for the Cape Verdean. At Hesperange, Gustavo Hemkemeier was the surprise name on the team sheet, the man who almost single-handedly kept his former team Etzella up last season, only to be signed by a Hesper team with international ambitions, and kept on the bench or among the reserves for the best part of this autumn season so far.

The game started off at an unsurprisingly high pace, living up to its billing, and the supporters didn’t have to wait for too long for the opener either: Clément Couturier and Dominik Stolz did well to overload Hesper’s right side in attack, for the German to then put a delicious through ball in Rayan Philippe’s path at the far post – the league’s top scorer was left unmarked, and exploited Sylvio Ouassiero’s costly defensive mistake with a composed shot past hopeless Lucas Fox.

Generally, Hesper started the game slightly well even if we don’t take into account the scoreline, as their suffocating press worked to great effect against an F91 side not especially used to such aggressive opponents. The high-energy, high-tempo counterpressing from the Hesper prevented the Yellows from being able to play the ball out from the back the way they usually do it against lower-profile opposition.

The second Hesper goal also came in the first quarter of the game, as another counter was finished off – this time by Spanish winger Ken Corral -, after Couturier provided yet another key pass en route to an absolutely exceptional performance on the evening. Fox rushed out from his goal in an attempt to block the angle, but made a positional mistake and Corral converted the chance, placing the ball at the near post.

Not accounting for individual defensive errors, F91 generally held their own in the first half, but their attacking build-ups were torn apart by Hesper’s off-the-ball approach. The only chances the home side could ever attempt during the first 45 minutes were either from direct free kicks, or other rather unimaginative efforts from outside the box.

After half-time, Dudelange seemed to be able to grow into the game, switching to more of a 4-1-2-1-2, with Kirch and Ouassiero being given less attacking duties. Hesper were no longer numerically superior in midfield either with F91 matching their diamond formation. This approach showed some early promise as the Hesper team looked to find a more cautious, less reckless approach after Dudelange reduced the empty space behind their wing-backs. This resulted in a tight second half contest, and all it needed to change was a moment of individual brilliance.

And who else is the man for such moments, if not the top marksman in Europe, Rayan Philippe? Swift’s chances were few and far between at this point, but Couturier found another opening and hoofed the ball in behind the defence, to find the onrushing Philippe, who connected to the ball well, took a few extra touches and put another one past Fox.

It was the final blow for F91, who lost their assistant manager Mehdi Al Alaoui, and head coach Carlos Fangueiro in the space of 10 minutes after subsequent second yellow cards for constant complaining and arguing with officials. It could only go downhill (although there was barely any space downhill from there) after the double suspension, and the final blow was done by substitute Bryan Nouvier, who scored arguably the biggest goal of the game, getting to a sloppy clearance first and hitting the bottom right corner with a controlled shot.

Dudelange didn’t manage to save face after a disastrous first half showing as they did concede another two after the pause, even if the contest looked more even in the latter phases of the game. This shock result means Swift remain the last unbeaten team standing, with an impressive 31 points from 11 games. Dudelange’s 30 points still place them 11 points above third-place Racing FCUL, though, so far from all is lost for F91.

Player of the Weekend #11

Alexis Larriѐre put on a complete performance boosted by a hat-trick as Jeunesse Esch thrashed lowly Etzella 6-0. The French midfielder could well stake a claim for the Man of the Match in that game.

Another honourable mention is the above-detailed performance of Hesper midfielder Clément Couturier, whose outstanding combination of vision and technique proved Dudelange’s kryptonite time and time again on Sunday, teeing up Rayan Philippe and Ken Corral for two absolutely crucial goals, having already recorded a pre-assist (the pass before the assist) prior to the first goal.

Had Hesper keeper Géordan Dupire’s audacious effort from near his own goal gone in during Hesper’s game against F91, the winner of the Goal of the Week (perhaps even the yearly winner) wouldn’t be a question. His attempt ended up only a couple of inches over the goal though, so let’s nominate someone who did score.

Bakary Jaiteh helped his team Wiltz stun Fola Esch 5-1, as the away side was on the wrong end of a crushing scoreline for the first time since the latest managerial change. Jaiteh’s first goal came in the 68th minute, with the score already standing at 3-1 – he spotted Fola goalkeeper Da Costa lolloping quite far from his goal, and took a chance: his 30-yard shot found the back of the net with Da Costa unable to get back in time.

Sidenote: Jaiteh did add another goal to his tally yesterday, with another long-range effort in the last minutes, which wasn’t far off his previous shot in terms of beauty.

Storyline of the Weekend #11

The two Esch-sur-Alzette clubs could hardly have produced more contrasting performances ahead of the Escher derby in the next round. Fola and Jeunesse both had opponents from the lower half of the league table but while Jeunesse took the opportunity and produced their most confident and collected display so far (although helped by two penalties in their favour) to beat Etzella by a shocking 6-0 scoreline, Fola collapsed miserably. They fell way short against Wiltz after scoring the first goal only six minutes in. Wiltz equalised rapidly, and decided the game in the second half with Benjamin Romeyns and Bakary Jaiteh both registering a brace each.

After such a nightmare of performance at Stade am Pëtz in Wiltz for Fola, it will be interesting to see whether they can sort their highly concerning constant structural and individual errors for the derby game. Midfielder Nenad Dragović took to the club’s website with an official statement apologising for the terrible second half on Sunday and trying to give some hope to a demanding fanbase that has seen way too many unwanted results this season already.

Jeunesse won’t be easy to break down either, as the traditionally smaller Escher team are starting to look more confident and better structured, despite their results still highly fluctuating between eye-catchingly good and jaw-droppingly disappointing. One thing is for sure: a rare unpredictable Esch-sur-Alzette derby is promising to be a fascinating showpiece event for next week’s round of fixtures.