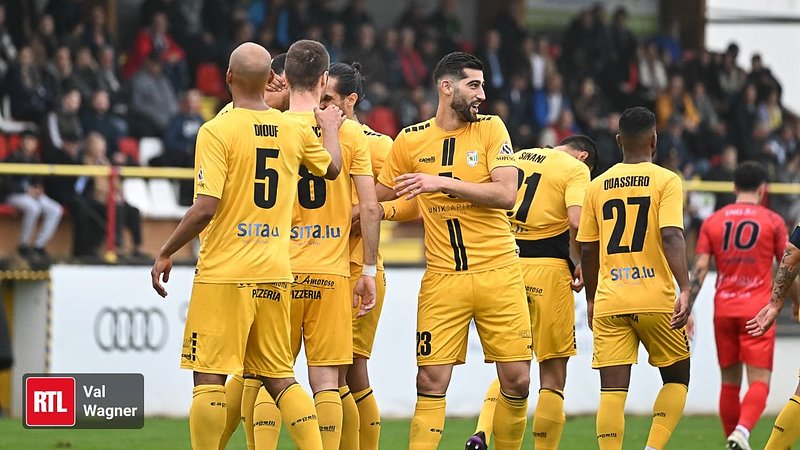 The two runaway leaders of the BGL Ligue will face off on Matchday 11, with both sides still unbeaten so far into the season. This potentially historical game will be fascinating to see as the country’s football fans are watching and waiting in anticipation to see which team gets to keep their flawless record.

Starting a season with a double-digit unbeaten streak is certainly outstanding, but it does happen from time to time in Luxembourg. There have been 15 occasions (including F91 and Hesper this year), of which an impressive 7 records belong to F91 Dudelange. This is the second time in Swift Hesper’s history to go this far, after a rather absurd tally of 3 wins and 7 draws in the earliest stages of 2004/05.

But the fact that they are still unbeaten is only half of the story. The nature – and the number – of their wins so far is what makes it two really special runs to witness. For the first time since 2016/17, there is more than one club to make it invincible past the first 10 games. Back then, it was Dudelange alongside Fola Esch and Differdange, but none of the three teams had a perfect record by then. This time around, the combined total of the two teams amounts to 58 points and 73 goals scored, which is unprecedented in league history.

The stakes are slightly higher for F91 in terms of making history as the current leaders are chasing their own historical records. They are still a few games away from starting the season with the longest winning streak ever, as that piece of history currently belongs to their 2010/11 side, who achieved an absolutely brilliant 15 consecutive victories before their first defeat. To put that into context, this means they beat every single opponent they faced in the first half of the season without failure. Their count is currently at 10 wins, and if they overcome the hardest hurdle on Sunday, they might be able to pose a serious threat on that record. (The longest unbeaten start, draws included, was achieved by F91 Dudelange in 2015/16 with 19 wins and 3 draws, so that one is still a target for both clubs).

Swift Hesperange have scored the most goals in the league to date, meanwhile, and their 28 points in 10 games has only been bettered by 3 sides in history: all of them perfect starts from F91 Dudelange (2007/08, 2010/11 and 2022/23) which further emphasises just how unique the sheer dominance of the two current powerhouses is.

The two highest-ever goals scored per game (in the first 10 matchdays) are also related to these two teams: Dudelange’s impressive average of 3.6 only comes second after Hesperange’s 3.7. Of course, the fate of this statistic after Matchday 11 is in the hands of opposition defences, who can prevent their opposition from maintaining such high-quality attacking performance. Neither of the defences have looked particularly leaky so far, so we should expect both per game averages to slightly drop after the weekend.

As for individuals, there are currently six players above the ratio of one goal contribution (goals + assists) per game, and all but one of them are playing for one of the two teams in spotlight on Sunday. Samir Hadji (11 goals, 1 assist), João Magno (7+9), Dejvid Sinani (8+8) and Dominik Stolz (8+9) occupy the 2nd – 4th places on the combined ranking, coming into this game in blistering form, but there has been one player stealing the show since the season kicked off: Rayan Philippe’s 13 goals and 12 assists for Hesper in only 25 league games isn’t only a mind-blowingly high number which seems to put all BGL Ligue clubs and players to shame at this rate, but he also has the highest number of goal contributions per game in 2022/23 across all European first-tier divisions, as has been mentioned before in my review articles. The 22-year old former France youth international is justifying why he was once the best among his peers in one of the biggest hotbeds for talent in the world.

So, to say the tension is high and there’s a lot on the line is a massive understatement. These two teams are only a few games away from writing history, and at least one of them will carry on their invincible streak and continue to terrify upcoming opponents and past record holders alike. Although

it’s hard to think of clubs that could stop either of them now (except for each other, of course), it always only takes one game for all these precious records to come to an end. So far, the toughest competitor to spoil the party has been Union Titus Pétange, the only team to achieve a draw against Swift Hesper in dramatic fashion. The following week, F91 visited Union who almost caused another upset, only to be defeated 1-2 by the dominant Dudelange.

In conclusion, for every football enthusiast or occasional BGL Ligue spectator, this game is a must. These teams have seemingly been playing in a league of their own so far, so the most interesting aspect will be the chance to see how they fare against each other. If the above raised your interest, I’d suggest tuning in to the game’s live stream via the site’s Live Arena feature, which provides a perfect alternative in case you can’t make it to the game in person.

All data and statistics mentioned are according to Transfermarkt’s historical BGL Ligue database. The database contains results from 2001/02 onwards.