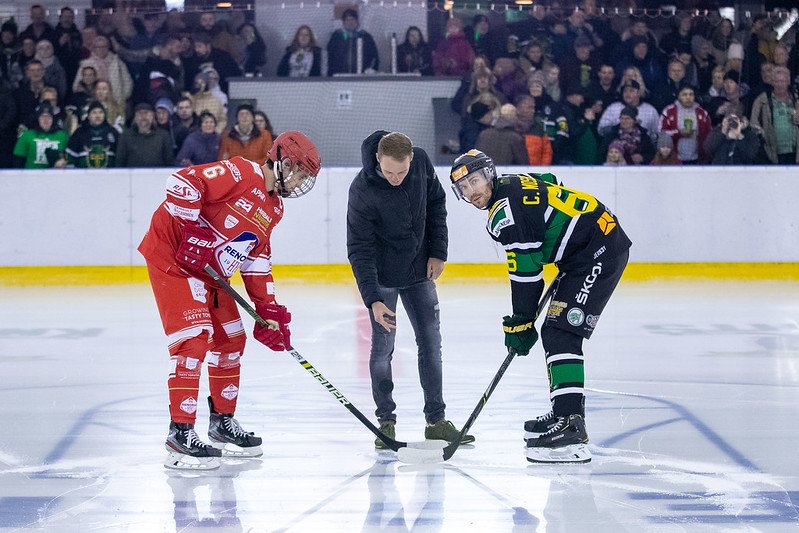 On Saturday night, another packed Beaufort Ice Park of over 500 spectators were treated to an ice hockey match for the ages as the young home team rallied from an early 0-2 deficit to defeat the league leading Herentals Toekomssteam by a score of 4-3 in sudden death overtime.

As a result of the construction of a state-of-the-art locker room facility, the Beaufort public have had to wait longer than usual to attend a home match of the Knights this season.

Instead of playing at a reduced capacity venue, the Royal Belgian Ice Hockey Federation (RBIHF) granted Beaufort an exceptional privilege to play all 8 of their scheduled away games in Division 1 first and then finish the season with 8 straight home matches. A remarkable gesture by the federation and every opposing team to agree to the stipulation.

There were more positives than simply on ice results from the start of the Knights’ season. With nearly an entirely Luxembourg born roster the future looks very bright for this team and the sport of ice hockey in general in the Grand Duchy.

2019/20 has also seen the birth of the Beaufort Knights professional quality live-stream broadcast of games on Youtube provided by ldmcevoy pictures. As the season rolls on, the Knights are stepping up both on and off the ice to provide a professional experience for players, referees, fans and sponsors.

The next Beaufort Knights home game will take place this Saturday 11th January 2020 at 19:30 in the Beaufort Ice Park against the Mechelen Future Golden Sharks.

With the Knights hoping to avenge a 6-4 loss earlier this season, they will be cheered on by an expected record attendance.

The announcement of DEL Professional hockey team Kölner Haie mascot “Sharkie” coming to perform his famous on-ice breakdance during the intermission causing a lot of buzz on social media.