Search
VIDEO: Puckers - The Spirit Of The Game
Directed by Liam McEvoy this intriguing documentary gives an exclusive look at what makes The Puckers so unique.

A unique, behind the scenes, look into what it takes for those team members of The Puckers ice hockey squad take to the ice, The Spirit Of The Game is directed by Liam McEvoy.

The Spirit of the Game, is an in-depth look into the Luxembourg Puckers men's ice hockey team. RTL Today caught up with the film's director Liam McEvoy to have a chat about how this group, with over 20 different nationalities and ranging in age from 20 - 60, challenged to win the French Ice Hockey Trophée Loisir in the 2017/2018 season.

The film had a private screening on Sunday 26 May and the reaction has been incredibly positive. 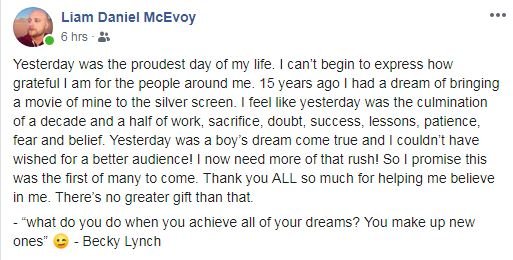 When did you decide to start this project?

The Spirit of the Game really went into production in June 2017. I had been filming bits and pieces before that but that’s when it really became a serious project.

What got you into film in general?

I started studying film-making, or more specifically media production, back in 2004 and the driving inspiration was the “making-of” the Lord of the Rings. Watching imagination come to life, being outdoors and playing with some really expensive looking toys seemed like the coolest thing in the world.

What was the most difficult aspect of putting this together?

Staying motivated, any feature length film is a long, complicated process and on this film I wore many hats. I was the Director of photography, Director, Interviewer, Producer, Sound Recordist and Editor working almost exclusively on crowdfunding and in-between my regular film work.

Was it hard to separate fan, film maker, player?

At times it was very hard to be purely a filmmaker. I practice with the team every week and throughout the process of making the movie they all became a part of my family. So there were often times where I respected their space a little too much. Also during games, it was very tough to focus on filming when for example they score a big goal. Inside you’re screaming in joy but you have to remain silent and keep the camera steady.

What are you most proud of in putting this together?

Beyond a doubt the exposure it has brought ice hockey in Luxembourg in general. Throughout the process I’ve posted teasers and trailers to social media. A lot of footage that didn't make the final cut I ended up making into short vignettes. If I’m allowed to say a 2nd point would also be how much I’ve grown in confidence as a filmmaker and how the players on the team have grown in on-screen presence when it comes to giving interviews.

Does it reflect the true life of a hockey team?

I wouldn’t necessarily say my movie reflects the life of a hockey team simply because the Puckers are so unique. The fact that the group ranges in age from 20 - 61 and there are 20 nationalities makes for a really special atmosphere. It was really this that inspired the making of the movie in the first place. I’ve never played on a team that are so welcoming to all and who really are one massive family.

Puckers - The Spirit Of The Game

What were you most frightened off handing over to general release?

I wouldn’t say I’m afraid of any reaction to it. I feel that the movie is respectful to all of the Puckers players but also, and something that was very important to me, is respectful to the opposing teams too.

How have the private screenings gone?

The first test screening in Eirelux was fantastic. I showed about 1/3rd of the final film that night but the reception was very positive from both players and friends of mine. This past Monday I screened the finished film to a handful of Puckers and friends who will miss the premiere and the best feedback I got was from the wife of one of the Puckers. She said that she was amazed because she hates Ice hockey but was hooked from start to finish. It validated my objective which was to make a movie. Not about ice hockey or even about an ice hockey team. But simply a movie about a great group of people battling with and for each other.

How can people go about viewing this piece?

For the time being there is no concrete release date to the general public. I will be submitting it to various film festivals in the coming months in the hopes of finding a distributor but you never know.  You can link through the facebook for the film and we have infos in how to get involved in Ice Hockey in general. I would advise people to check out the websites: icehockey.lu / tornadoluxembourg.com/ www.puckers.lu / www.ihcbe.lu and send us an e-mail using the contact button on each page.

What other projects have you been / are you involved with?

Currently I’m running the media for the Luxembourg National Ice hockey team. We have a big year coming up so I have a lot of promotion to do and I’d like to build up a larger print, TV and radio presence for the national team. On the film front I’m currently the 1st assistant editor on a Luxembourg - Belgium - Irish co-production called “The Racer”. I will be making a wedding movie in June and I’m in the editing stage of a corporate video for Amazon. There a few other smaller projects in the pipeline. Needless to say I won’t be bored this year.

What about the future?

A big part of this year will be opening LDMCEVOY Pictures as an SARLs. I’m currently working on my business plan and hope to get the ball rolling on that very soon.

Yes that was made official last night (Saturday 25 May). Luxembourg will enter Ice hockey Olympic qualifiers for the first time in our history. Those games will be played in Luxembourg itself in November. Our chances of making through all of the qualifying rounds are slim but the more games our team play together the more they grow and I think we have a real chance to turn some heads throughout the campaign.

Will you go if they get the shout?

That’s the decision of the Luxembourg Ice hockey federation but I’ve been an advocate for Ice hockey in Luxembourg as a player, fan and now media provider for nearly 20 years so I will always consider it an honour to contribute to the sport in any way I can.