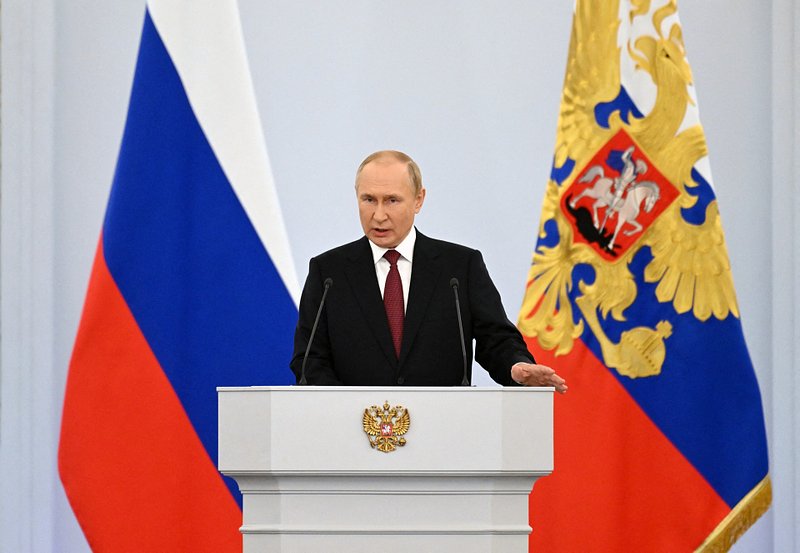 Russian President Vladimir Putin Friday warned the West that the people of four Moscow-occupied Ukrainian regions were "our citizens forever" as he formally annexed them at a grand Kremlin ceremony.

"I want to say this to the Kyiv regime and its masters in the West: People living in the Lugansk, Donetsk, Kherson and Zaporizhzhia (regions) are becoming our citizens forever," Putin said, adding that they had made a "unambiguous choice" to join Russia.

He then joined hands with the Moscow-installed heads of the regions controlled by Russian forces on a stage in front of the Russian elite and chanted alongside them "Russia! Russia!".

Responding to the news, EU leaders on Friday vowed they would "never recognise" Russia's illegal annexation of four more regions in Ukraine and accused the Kremlin of putting global security at risk. "We firmly reject and unequivocally condemn the illegal annexation by Russia of Ukraine's Donetsk, Luhansk, Zaporizhzhia and Kherson regions," the 27 leaders said in a statement.

'They want to make us into a colony'

During his speech, Putin said that Western countries want to see Russia as a "colony", claiming "It is out of greed, with the aim of maintaining its unlimited power. These are the real reasons for this hybrid war that the West is waging against us... They want to make us into a colony." 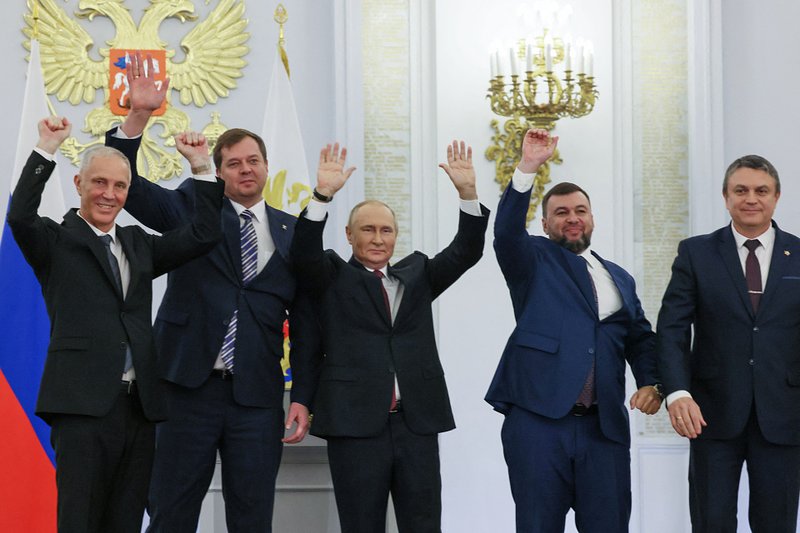 The Russian President also urged Kyiv to stop all military action in Ukraine.

"We call on the Kyiv regime to immediately stop fighting and stop all hostilities... and return to the negotiating table," he said.

Putin went on to claim that Russia was "not striving" to recreate the Soviet Union. "The USSR is no more. We can't bring the past back. And Russia doesn't need it anymore. We are not striving towards that," Putin said, after earlier claiming the last Soviet leaders had "destroyed our great country".

Putin also accused the West of organising blasts that resulted in multiple gas leaks on the Nord Stream gas pipelines from Russia to Europe.

"Sanctions are not enough for the West, they have switched to sabotage. Unbelievable, but it is a fact!" Putin said.

"By organising explosions on the Nord Stream international gas pipelines that run along the bottom of the Baltic Sea they actually started destroying European energy infrastructure," Putin said.

"It is clear to everyone who benefits from this," Putin added, without providing further details.

Unexplained gas leaks, preceded by two explosions, occurred on the Nord Stream 1 and 2 pipelines on Monday.