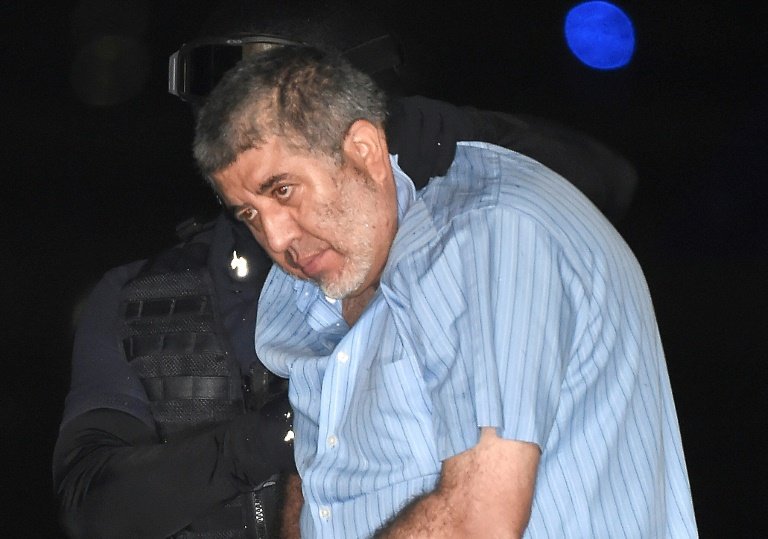 Mexican former cartel boss Vicente Carrillo Fuentes, seen here after his arrest in 2014, has been sentenced to 28 years in prison / © AFP/File

A Mexican court has sentenced former drug lord Vicente Carrillo Fuentes, who headed one of the country's leading cartels, to 28 years in prison, prosecutors said Tuesday.

The 58-year-old, known as "El Viceroy," is the brother of the founder of the Juarez cartel, whose turf wars with enemies were blamed for thousands of deaths.

Amado Carrillo Fuentes, known as "The Lord of the Skies," was considered one of Latin America's biggest drug traffickers until he died during plastic surgery in Mexico City in 1997.

Vicente Carrillo Fuentes, who replaced his brother, was arrested in 2014 in the northern state of Coahuila on charges of organized crime and drug trafficking.

The Attorney General's Office said in a short statement that a judge had handed down a 28-year jail sentence to the former cartel kingpin.

The United States had offered a $5 million reward for information leading to his capture, while Mexico offered $2.2 million.

The US Drug Enforcement Administration's then-chief, Michele Leonhart, congratulated Mexico at the time for catching "one of history's most notorious drug traffickers."

"Carrillo Fuentes was the leader of the Juarez cartel and facilitated murder and violence in Mexico while fueling addiction in the United States and across the world," Leonhart said.

The arrests of its leaders and bloody turf battles have sapped the strength of the Juarez cartel, which is no longer such a powerful force.

The fallen drug lord, whose sentence takes into account time already served, was described by authorities as a "very low-profile and discreet" cartel boss.

Based in Ciudad Juarez, a city on the border with the US state of Texas, the Juarez cartel fought against Joaquin "El Chapo" Guzman's Sinaloa cartel for control of the major drug transit route.

Guzman is now serving a life sentence in a US prison.

The bloodshed in Juarez and elsewhere in Mexico led to the government's controversial deployment of the military in the war on drugs in 2006.

The Latin American country has seen more than 300,000 murders since then, most of them blamed on criminal gangs.