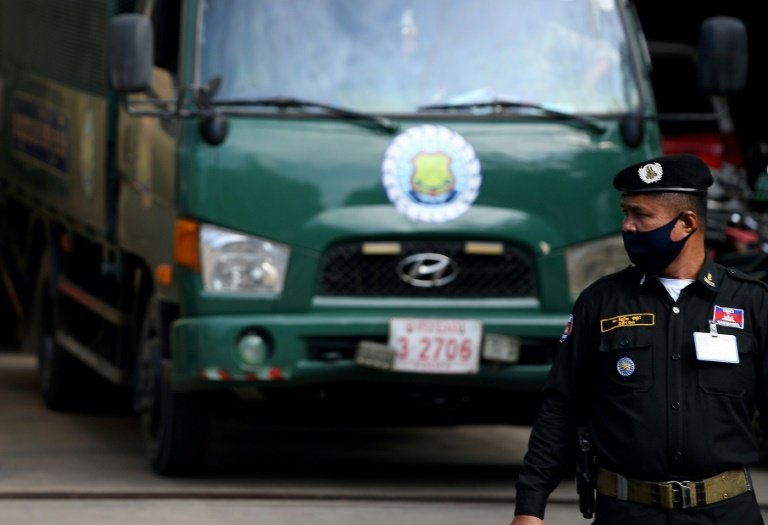 Rong Chhun, the leader of the Cambodian Confederation of Unions, was arrested in July last year after accusing the government of "irregularities" over the demarcation of the eastern border with Vietnam / © AFP

A Cambodian court on Wednesday jailed outspoken union leader Rong Chhun for two years on incitement charges relating to comments about the country's border, the latest legal case activists say is aimed at cracking down on opposition voices.

Rong Chhun, the leader of the Cambodian Confederation of Unions, was arrested in July last year after accusing the government of "irregularities" over the demarcation of the eastern border with Vietnam.

The demarcation process at the Cambodia-Vietnam border has for years been a lightning rod for controversy, fuelled by strong anti-Vietnamese sentiment in the kingdom.

Rong Chhun, who has been in pre-trial detention since his arrest last July, had said that a newly agreed borderline encroaches on some locals' farmland.

On Wednesday, the prominent union leader was found guilty of incitement charges by the Phnom Penh Municipal court and sentenced to two years in prison, said judge Li Sokha during a brief hearing attended by some international diplomats.

Two other activists, who were arrested during protests demanding his release, were both sentenced to 20 months in jail.

The judge also ordered the trio to jointly pay $100,000 to the government's border committee.

"It's so disappointing. This is a serious punishment, and the verdict did not render justice to my three clients," said lawyer Sam Sokong, who added that Rong Chhun will appeal the ruling.

Rong Chhun denied the charges against him during his trial in January, and his supporters slammed the court's ruling Wednesday.

"The court's decision to sentence Rong Chhun today is a threat to younger generations... to stop thinking about the nation's problems and social issues," Ouk Chhayavy, president of the Cambodia Independent Teachers' Association, told reporters outside the court.

Opposition politicians have long accused strongman premier Hun Sen of ceding territory to Vietnam, pointing to the border issue to whip up nationalist sentiment against him.