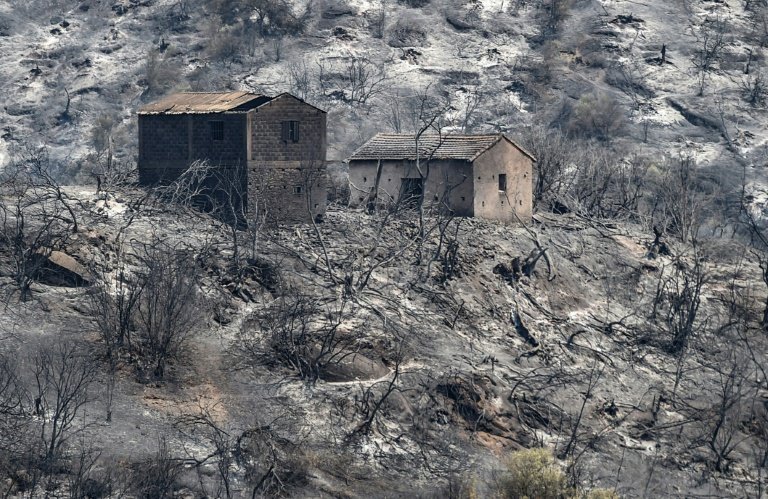 Burned houses stand amidst charred trees, on what used to be a forested hillside in Algeria's Kabylie region / © AFP

Firefighters battled wildfires still raging across northern Algeria Friday assisted by volunteers, but the deadly blazes in the worst-hit province of Tizi Ouzou were largely extinguished, the emergency services said.

The North African country was observing a second day of national mourning for the 71 people confirmed killed in by far the deadliest wildfires to hit the Mediterranean this summer.

Mosques across the country were expected to hold prayers for the departed after the main weekly Muslim prayers at midday.

Even in Tizi Ouzou province, fire crews remained on high alert for any resurgence of the flames that have reduced its mountain forests to charred wood and ash.

After first reporting that "all the forest fires that broke out in Tizi Ouzou were extinguished this morning", the emergency services reported "five new fires" in the province.

Fire crews continued to battle blazes in Bejaia and Boumerdes, the other two provinces of the mainly Berber Kabylie region that extends along the Mediterranean coast east of the capital Algiers, as well as in Jijel, further east.

Some 35 fires raged across 11 northern provinces, the emergency services said.

A total of 76 of the more than 100 fires that had broken out since Monday were now under control.

Two French firefighting aircraft have been supporting the emergency services in Kabylie since Thursday.

They were expected to be joined later Friday by three tanker aircraft from Spain and Switzerland, President Abdelmadjid Tebboune said. 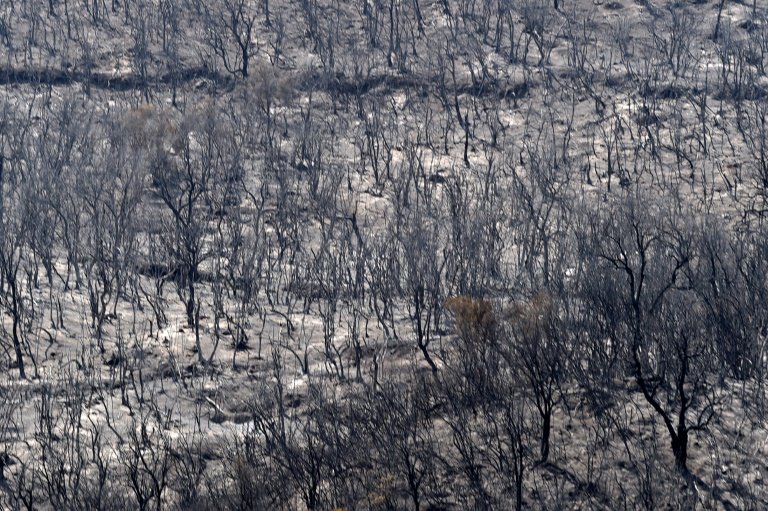 Charred trees stretch as far as the eye can see in Tizi Ouzou district, east of the Algerian capital / © AFP

High winds fuelled the rapid spread of the flames in tinder-dry conditions created by a heatwave across North Africa and the wider Mediterranean.

Meteorologists expect the regional heatwave to continue until the end of the week, after temperatures in Algeria reached 50 degrees Celsius (122 Fahrenheit).

Across the border in Tunisia, where almost 30 fires have been recorded since Monday, the mercury hit an all-time record of 50.3 Celsius in the central region of Kairouan.

On the northern shores of the Mediterranean, deadly wildfires have been raging in Turkey and Greece for the past two weeks.

In Italy, where firefighters were battling more than 500 blazes, Sicily recorded a temperature of 48.8 degrees Celsius (119.8 Fahrenheit) on Wednesday that is believed to be a new European record.