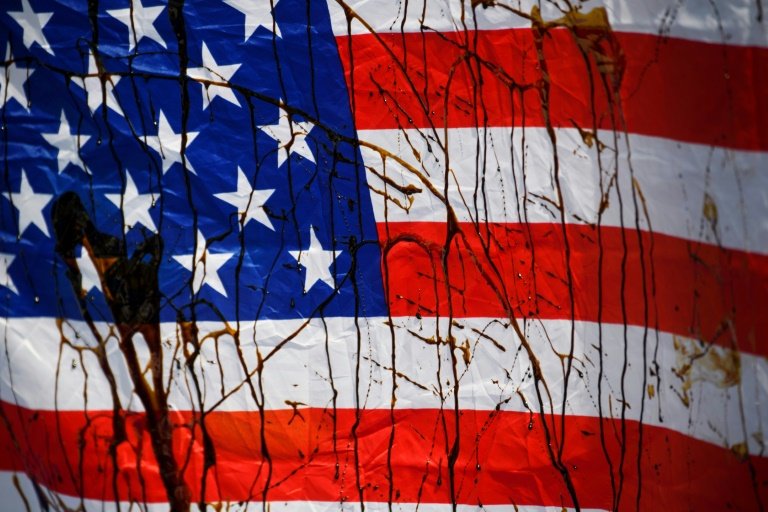 A US flag is stained with a biodegradable substance masquerading as "oil" by demonstrators with Extinction Rebellion XR Youth Los Angeles during a protest against climate change and the Line 3 oil pipeline project outside of the US Federal Building on August 13, 2021 in Los Angeles, California / © AFP

US intelligence services said Thursday for the first time that climate change poses wide-ranging threats to the United States' national security and stability around the world.

More extreme weather "will increasingly exacerbate a number of risks to US national security interests, from physical impacts that could cascade into security challenges, to how countries respond to the climate challenge," the White House said in a summary of the intelligence reports.

The prediction was made in the first official assessment by the Office of the Director of National Intelligence, or ODNI, which oversees the sprawling US intelligence apparatus.

The document "represents the consensus view of all 18" elements in the intelligence community, the White House said.

According to the agencies, climate change is driving "increased geopolitical tension as countries argue over who should be doing more," cross-border "flashpoints" as countries respond to climate change impact by trying to secure their own interests, and fallout from climate on national stability in some countries.

On a practical level, US national security bodies will be integrating climate change effects into their planning, the White House said.

The Pentagon, for example, will consider climate change "at every level, which will be essential to train, fight, and win in an increasingly complex environment."

Migration, a politically sensitive issue on the US southern border, will also be seen partly through the lens of climate change, the White House said.

"This assessment marks the first time the US government is officially recognizing and reporting on this linkage."

The report was issued just ahead of the United Nations climate summit in Glasgow, Scotland, which President Joe Biden will be attending.

"With more than 85 percent of global emissions coming from beyond US borders, we alone cannot solve this challenge. We need the rest of the world to accelerate their progress," a senior US official, who asked not to be identified, told reporters.

A separate government report issued later Thursday characterized climate-related risk as "an emerging threat to financial stability of the United States," according to the Financial Stability Oversight Council.

Recommendations included directives for regulators to require additional climate disclosures of companies and other regulated entities and consider mandates for them to undertake "scenario analysis" on climate outcomes.

"This report puts climate change squarely at the forefront of the agenda," Treasury Secretary Janet Yellen said at a meeting of the FSOC, which was set up after the 2008 financial crisis.

Yellen described the report as a "critical first step" as she called for immediate action, saying "the longer we wait to address the underlying causes of climate change, the greater the risk."