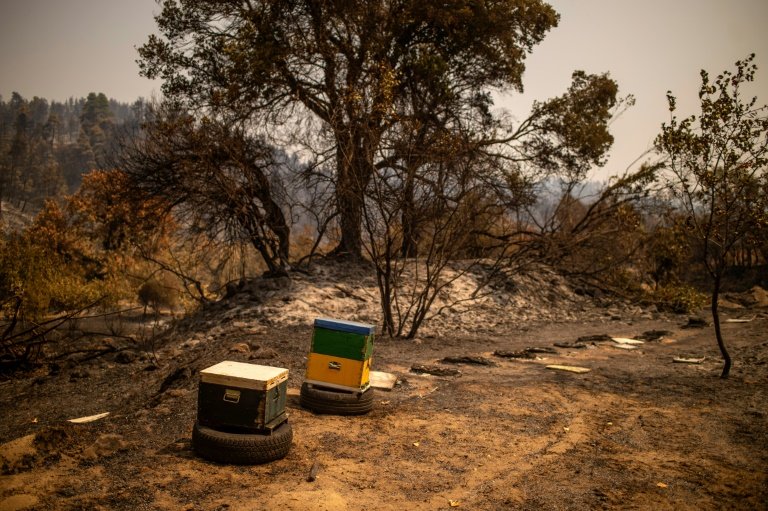 Bee colonies that have been bred over decades on the Greek island of Evia, with skills passed down through generations, have been wiped out in a fury of wild fires billowed by the forces of climate change / © AFP

On the scorched earth, dozens of blackened rings mark all that remains of beehives that dotted the once verdant hillsides outside the village of Voutas on Greece's Evia island.

Pine, walnut and fig trees were among the rich plant life sustaining the bees in a region that produces 40 percent of Greece's honey. And those industrious workers were, in turn, a cornerstone of the local ecosystem, pollinating local farmers' crops.

"It's a whole way of life that we lost along with the forest," says Babis, 53, whose main source of income was his hives.

"What are we going to find here next year? It's over. We've gone from heaven to hell."

Bee colonies that have been bred over decades, with skills passed down through generations, have been wiped out in a fury of wild fires billowed by the forces of climate change.

Greece -- along with Turkey, Italy, Spain and Algeria -- has been hit by a savage fire season that Prime Minister Kyriakos Mitsotakis described as the "greatest ecological disaster in decades".

"The climate crisis is a harsh reality and shows us that forests will become increasingly vulnerable and increasingly valuable for what they provide," says Dimitris Karavellas, managing director for WWF Greece.

"The climate crisis is not an excuse to fail but must be a wake-up call for change."

But for the beekeepers of Evia, it's too late for change.

"We lost our hives because we were running to save our villages," says Adonis Vakos, his cap pulled down on his head as he surveys the ruins of the charred forest before him.

Vakos, 49, the last representative of a family of beekeepers, says only 50 hives remain of the 130 he had before the fires swept across the island for nine days.

"I have been in the culture of honey since I was 10. We will never have time to revive it, we will be dead before it grows back. It will take 50 years, if it ever comes back."

Until now, northern Evia has been one of the most popular areas in Greece for beekeepers.

Its micro-climate, biodiversity and pine forests caressed by the etesian summer breeze offered ideal conditions for the production of exceptional honey.

Throughout the summer and up until November, thousands of Greek beekeepers brought their hives to the north of Evia island, says Panagiotis Gianakaras, a local beekeeper.

He managed to save his 80 beehives. The colourful wooden boxes sheltering their thousands of bees now rest in the shade of olive trees.

But even for those fortunate enough to have saved their hives, the destruction of the forests -- and the bees' food source -- means they are forced to look elsewhere.

"I am taking my beehives tomorrow to Pelion," a mountainous peninsula north of Evia, says Adonis Angelou, who managed to save his 150 hives by using a tractor to clear flammable material and creating a fire-break around them.

"I rented land near Volos, it incurs new costs but I have no choice," says Angelou.

"Fortunately I saved them. But how are the bees going to feed themselves? With charcoal?"

From rising sea levels to flash floods and unpredictable and more intense heatwaves, climate change will alter the nature of agriculture and force farmers to abandon once productive land, according to climate scientists.

"We will probably have to migrate too, and put our beehives in other regions," says Vakos.

"Look, there's nothing green around us anymore. And a bee without greenery cannot survive."