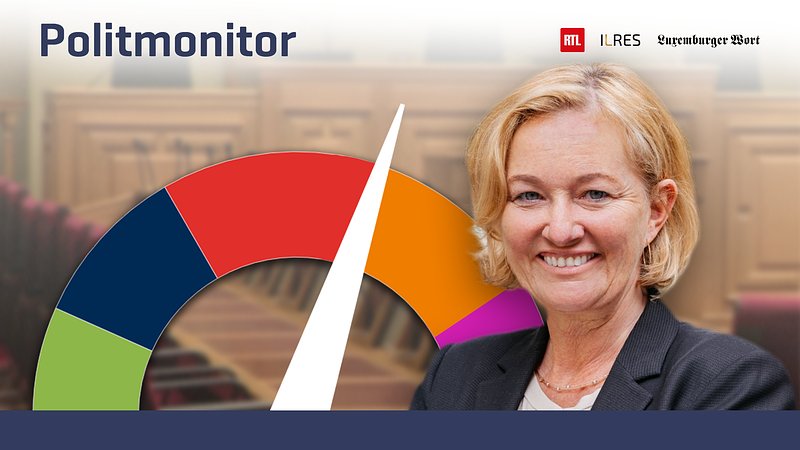 Not much has changed since the last 'Sonndesfro', a political poll conducted by Ilres on behalf of RTL and the newspaper Luxemburger Wort.

However, the results reveal a number of interesting trends regarding the next legislative elections, which will take place in less than a year.

If the election was held on Sunday, the current government coalition between the Democratic Party (DP), the Luxembourg Socialist Workers' Party (LSAP), and the Green Party (Déi Gréng) would obtain 33 seats in the Chamber of Deputies. That would be two more than after the 2018 elections.

Here are the results in detail

However, the balance of power has changed. With 13 seats, the LSAP would have three more than five years ago.

The DP would retain its 12 seats.

The Green Party, on the other hand, would lose one of its current nine seats.

The LSAP – certainly boosted by the popularity of the current Deputy Prime Minister Paulette Lenert – would thus be the strongest party within the current coalition. They could therefore also make more demands when it comes to forming the next government. With 20.7%, the LSAP would achieve its best result since the last election.

In the opposition, the Christian Social People's Party (CSV) would be the biggest loser. -6 seats compared to the 2018 election results. The party of former Prime Minister Jean-Claude Juncker would thus be left with 15 seats – yet another historic low point after the disappointing results of the last elections.

While the CSV gains 0.3% compared to the last Sonndesfro poll, the party would still lose one seat due to the way districts work in Luxembourg's electoral system.

The Pirate Party: The other big winners

If elections were held on Sunday, the Pirate Party could triple their current two seats to six. With this result, the party would be a possible partner in various three-way coalitions. On the other hand, they would not be able to form any two-way government coalitions.

The Alternative Democratic Reform Party (adr) would keep its current four seats. The three additional seats, which the party was temporarily projected to gain during the turbulent pandemic time in November 2021, would now be gone again. With 7.7% of the votes, the party would be below its score in 2018 (8.6%).

The Left Party (Déi Lénk) would keep its two seats, whether compared to the 2018 elections or the last two polls in November 2021 and June 2022 respectively.

Nationally and percentage-wise, the newly founded Fokus party would lose almost half of its 2.9% it achieved in June this year. In the latest Sonndesfro, the party co-founded by former CSV President Frank Engel scored only 1.5% and is thus, for the time being, far away from gaining a seat in the Chamber of Deputies.

How do voters evaluate the work of the government and the opposition?

When assessing the work of the government, the opposition, and the individual parties, there are only minimal changes in this Sonndesfro. On average, both the government and opposition gain 0.1%.

This means that there is still a clear gap between the government and the opposition. It also indicates that the last tripartite meeting did not lead to a difference in how voters evaluate the work of their political representatives compared to six months ago.

For the Sonndesfro – which only reflects the current mood and should not be regarded as an election forecast – 1,839 eligible voters answered a questionnaire via telephone or online between 14 November and 21 November 2022.

Details as always on Alia.lu