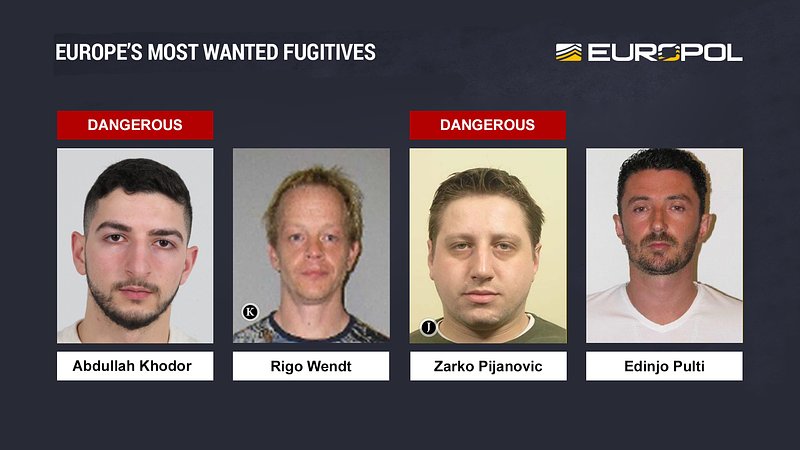 The European Network of Fugitive Active Search Teams (ENFAST), with the support of Europol, has launched its campaign for 2022.

All of the wanted individuals listed this year are accused of very serious crimes, including murder, human trafficking, armed robbery, terrorism, and similar crimes.

Europol mainly focusses on leaders and those at the heart of organised crime syndicates, including mafia bosses who have massacred innocent citizens, drug dealers, human traffickers, contract killers, and those involved in major money laundering schemes.

To this end, ENFAST and Europol call on all EU citizens to visit the website "Europe's most wanted fugitives" and look at the photos. The authorities hope that some criminals may be identified this way and that citizens may provide them with useful information.

Among the wanted individuals are also four men wanted by the Luxembourgish authorities for crimes that were either committed in Luxembourg or have a connection to the Grand Duchy.

Rigo Wendt from Germany is wanted in Luxembourg. He is suspected of human trafficking, pimping, and money laundering. The offenses have been committed between 2012 and February 2019.

Wendt is highly suspected to have set up an escort-and callgirl service which was also available in Luxembourg. He organised and coordinated the transport of the women from Germany to customers in Luxembourg. Wendt used to be the owner of three brothels in Germany, including an establishment known as "Club Pearls".

He has been wanted internationally since 25 February 2019. Tips can be forwarded to the E-mail address fast.lux@police.etat.lu as well as directly via www.eumostwanted.eu

39-year-old Zarko Pijanovic, also known as Zarko Stefanovic, was born in the city of Leskovac in Serbia. Pijanovic is considered "dangerous" by the authorities.

He is suspected of having participated in an armed robbery in a Jeweller's store in Luxembourg City on 18 July 2008. On that day, at around 10.25am, four perpetrators entered the store in Luxembourg City. The offenders were in possession of pistols. The employees and three customers in the store were threatened and forced to lie on the floor. Using an axe or similar, one of the robbers destroyed the showcases inside the shop.

64 very valuable watches worth several hundred thousand euros were stolen. The robbers then fled in a Mercedes E250, which had been stolen in the north of Luxembourg on 15 July 2008. This car was found one hour later in Luxembourg City. It appears from the investigation that the perpetrators of this robbery belonged to the "Pink Panther" gang. The group is responsible for several robberies in jewellery stores in Europe at this time.

On 20 May 2020, a European Arrest Warrant and an International Arrest Warrant were issued. Tips can be forwarded to the E-mail address fast.lux@police.etat.lu as well as directly via www.eumostwanted.eu

Edinjo Pulti is suspected of attempted murder. The incident occurred at around 8.55pm on 2 August 2020 in Pétange. Several people were involved in this case. The suspected offender used a knife to stab two men several times.

The main victim was hit in the abdominal area and seriously injured. Two other accomplices could already be arrested in this matter. On 21 February 2022, he was last seen in a night club in Shkodra (Albania).

On 25 January 2021, a European Arrest Warrant and an International Arrest Warrant were issued against Edinjo Pulti. Tips can be forwarded to the E-mail address fast.lux@police.etat.lu as well as directly via www.eumostwanted.eu

Abdullah Khodor is suspected of having taken part in a particularly violent homejacking in Gonderange. The authorities consider him "dangerous". At around midday on 17 December 2017, a woman and her minor niece were attacked in her house by two offenders. The victims were threatened with knives. Several pieces of jewellery and a small sum of money were stolen. The perpetrators also destroyed the house phone so that they could not call the police.

On 2 December 2019, a European Arrest Warrant and an International Arrest Warrant were issued against Abdullah Khodor. Tips can be forwarded to the E-mail address fast.lux@police.etat.lu as well as directly via www.eumostwanted.eu