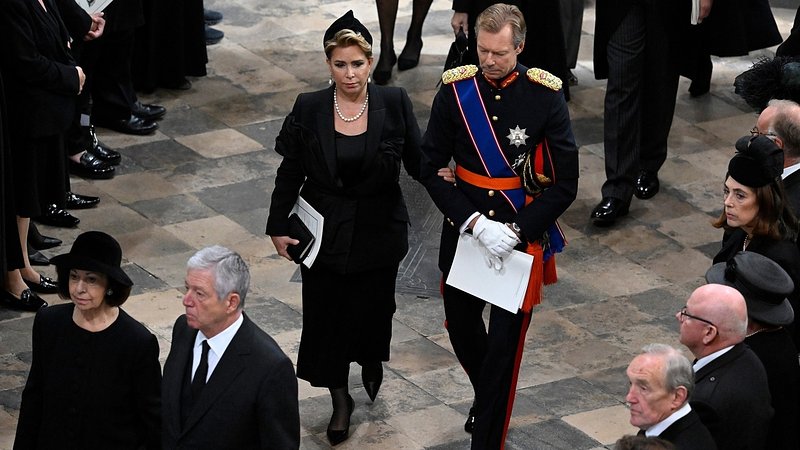 On Monday, Grand Duke Henri and Grand Duchess Maria Teresa participated in the state funeral of the late British monarch.

The state funeral of Queen Elizabeth II took place in London on Monday 19 September. Around 2,000 heads of state from all around the world have travelled to the English capital to take part in the formal ceremony, including Luxembourg's Grand Duke Henri and Grand Duchess Maria Teresa.

The Grand Ducal couple first visited Westminster Hall on Sunday to pay their personal respects to the late queen. The picture below shows the couple standing on the balcony of Westminster Hall, where thousands of mourners had queued over the past four days to bid farewell to the longest-reigning British monarch.

During the funeral, the Grand Ducal couple was seated in the second row, which underlines the close relationship between the Luxembourgish and British royal families. The late Grand Duke Jean, who passed away in 2019, had a particularly strong bond with the Queen and the Duke of Edinburgh, all being members of the war generation.

In 1942, Grand Duke Jean volunteered to join the Irish Guards (IG), a regiment of the British Army in which he further served as Colonel-in-chief from 1984 to 2000. According to reports, Grand Duke Jean and Queen Elizabeth were close enough for her to once great him with the words "Hi Johnny, how are you?".

In 1972, he was also made a Stranger Knight of the Garter, the most senior order of knighthood in the British honours system. Four years later, Queen Elizabeth and Prince Philip travelled to Luxembourg for a state visit of the Grand Duchy.

To honour the late British monarch, flags across Luxembourg are flying at half-mast on Monday.

Queen Elizabeth II passed away at the age of 96 at Balmoral Castle in Scotland on Thursday 8 September.