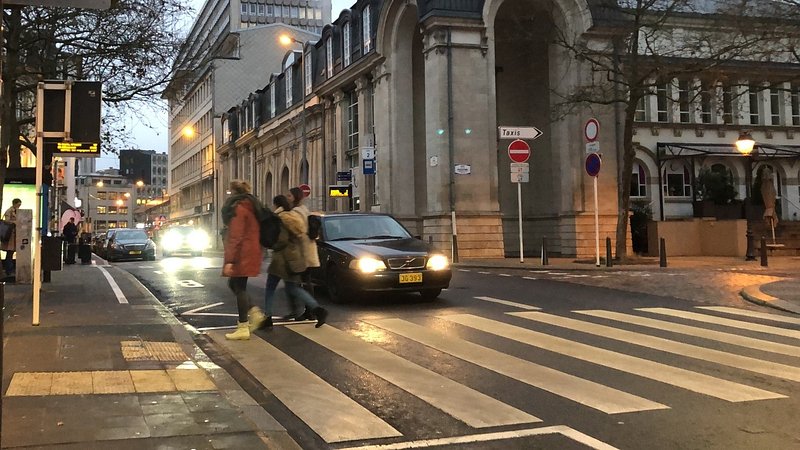 Patrick Goldschmidt, Luxembourg City alderman in charge of transportation, knows about the results of the ZUG analysis, but has doubts about their results.

Officials from Luxembourg City refute the conclusion by a crowd-sourced platform that 475 out of 1,787 pedestrian crossings in the capital violate the Code de la Route (Highway Code).

The Centre for Urban Justice (ZUG) launched a platform called "Safe Crossings", asking volunteers to assess satellite imagery and mark crossings that, based on calculations done by an app designed for this purpose, are not in line with the law.

For instance, regulations state that parking spaces have to be at a minimum distance of five metres from pedestrian crossings. However, the analysis showed that in 475 out of 1,787 cases, the municipality of Luxembourg City failed to respect similar rules.

Red dots mark those zebra crossings that lack conformity, while yellow ones show those where ZUG is unsure about an adequate evaluation. / © Zentrum fir Urban Gerechtegkeet

Patrick Goldschmidt, Luxembourg City alderman in charge of transportation, knows about the results of the ZUG analysis, but has doubts about their results. He emphasises that the City always acts according to official guidelines and boundaries.

Furthermore, Goldschmidt believes that the ZUG analysis lacks precision given that it was completed with the help of a geo app and not by people on site. Judging the conformity of a zebra crossing with satellite images is difficult, the alderman noted. For instance, they classified some locations as lacking conformity despite the fact that there are traffic lights at the scene.

The municipality of Luxembourg City welcomes public interest in safety, but still concludes that the analysis is not as accurate as it has to be.

Following the release of the ZUG document, Luxembourg City officials sent technical personnel to each location to double check the crossings. According to their own report, only 32 out of 1,787 cases can be improved, which City officials intend to do as soon as possible.