Search
EU Polish Miners Demo
© Celine Spithoven, Dan Wiroth, Pitt Wagner, Serge Pauly, Jeff Spielmann, Maxime Gonzalez a Monica Camposeo
The photos published on this site are subject to copyright and may not be copied, modified, or sold without the prior permission of the owner of the site in question.

Around midday, the demonstration by Polish miners outside reached the Czech Embassy to continue the protest.

An estimated 1,500 protestors turned up outside the European Court of Justice from 9.30am on Friday, as Polish unions expressed their anger over a court ruling forcing the closure of the Turów coal mine, on the Czech-Poland border.

The European authorities left nothing to chance, setting up barricades, mobilising 830 police officers, anti-riot vehicles and a large security perimeter.

Attendees say they are most worried about losing their jobs. About 10,000 people work in or for the Turów mine, which generates around 9% of Poland's electricity. An information sheet produced by demonstrators reads that the closure of the mine "would push an entire region into energy poverty and misery."

Our reporter on the scene said that the protest developed peacefully, as he spoke to some attendees. There is a high number of riot police - over 800 officers are guarding the EU institutions and the route where the demo is taking place.

About 15 Poles living in Luxembourg gathered at the Philharmonie for a local anti-protest in support of the EU.

The Court acknowledged the demonstration in a press statement on Friday afternoon, adding that a petition had been filed by the Solidarity union with the Court, but ensured that proceedings would continue normally. 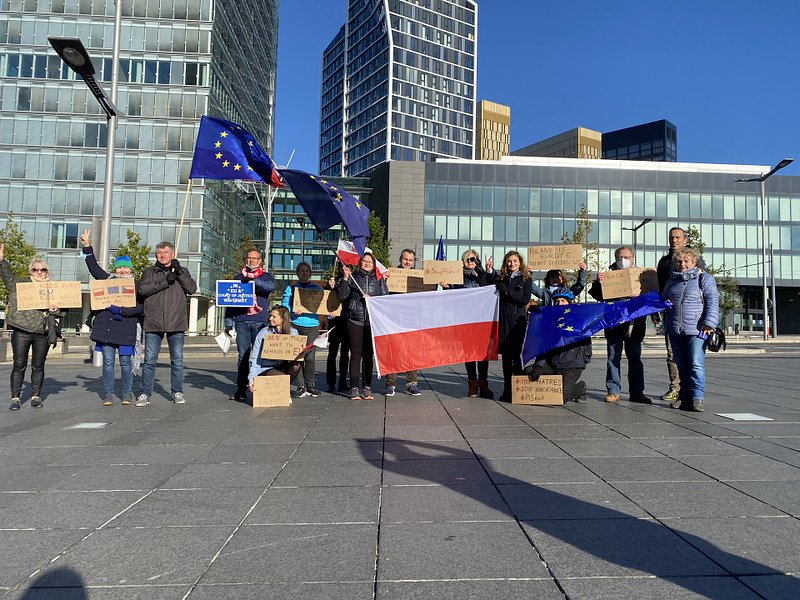 Preparations ahead of the demonstration: