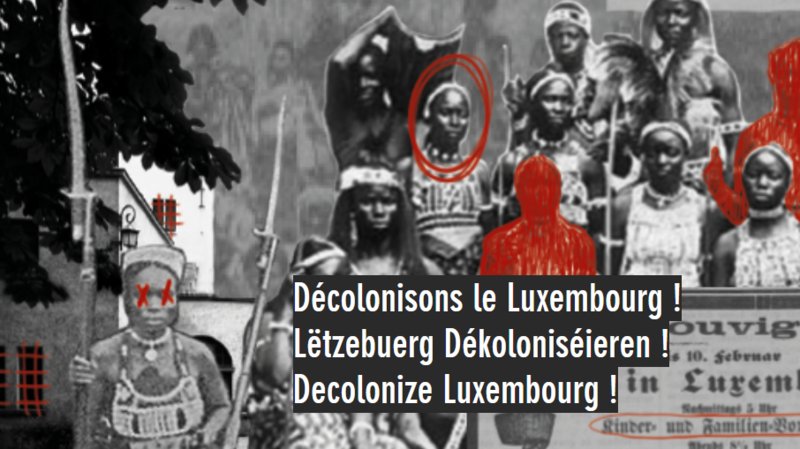 According to Richtung22 and Lëtz Rise Up, Luxembourg's colonial history has been ignored for too long.

The two organisations have put together a guided tour through Luxembourg City in order to raise awareness of this part of Luxembourg's past.

One part of the tour focusses on Villa Louvigny, the building currently housing the Ministry of Health. An information board in front of the gate informs passers-by that during the 20th Century, numerous events were organised at Villa Louvigny.

In 1900, a human exhibition entitled "Exposition and Spectacle of the Amazons of Dahomey" took place there. Fifty three people, including women, children, and men "performed" during this event. Today, these types of exhibitions are referred to as "human zoos". In the words of the organisers, the purpose of these events was to "exhibit non-white people from the colonies, so that Europeans could get a glimpse of their lives".

Sandrine Gashonga from Lëtz Rise Up explains that white Europeans visited these "human zoos". However, while the aforementioned information board mentions that Villa Louvigny once housed the offices of RTL, there is no mention of Luxembourg's colonial past.

Gashonga stresses that they want to bring these aspects of the country's history to light through their project. They also demand that the authorities raise awareness of these stories and ensure that they are not hidden from the public.

Lëtz Rise Up and Richtung22 worked together for over a year to collect the research on which their guided tour in the context of the "Decolonise Luxembourg!" campaign is based on. The topic seems to generate a lot of interest, this weekend's guided tours – which are offered in Luxembourgish, French, and English – are already fully booked.

At the Charlie's Gare stop, which today is served by the tram, the organisers explain that the railway lane became mostly known because of the popular song "De Jhangli fiert den Houwald erop". What many people are not aware of, however, are the song's overtly racist lines.

The lines in question, in which the n-word is used, are usually omitted. According to Gabrielle Taillefert from Richtung22, Luxembourg does little to deal with its colonial history.

Taillefert explains that in her eyes, the solution is not to simply ignore it, but to put it into context and acknowledge its existence.

Made in the Belgian Congo

It is undisputed that Luxembourg has a colonial past, just like other European countries. During their guided tour, Lëtz Rise Up and Richtung22 denounce both state institutions and private companies.

The Grand Ducal family's tiara, for instance, was made in the Belgian colony of Congo. Lëtz Rise Up and Richtung22 demand a public apology from the royal family.

In addition, the two organisations demand the creation of a dedicated department at the University of Luxembourg, in order to guarantee increased research into the topic of the Grand Duchy's colonial history.

The "Decolonise Luxembourg!" campaign is intended to launch a public debate. Lëtz Rise Up and Richtung22 plan to release their guided tour as an audio walk during the summer. A dedicated app will allow anyone to discover Luxembourg's colonial history at their own pace.