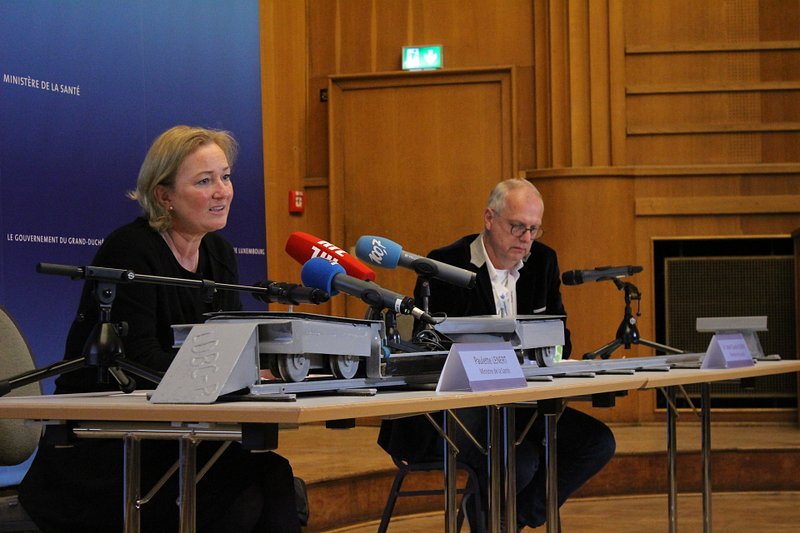 The situation in Luxembourg has improved, said Lenert, with infections and hospitalisations falling over recent weeks. Cases have dropped in all age categories except for the very youngest, with children aged 0-14 years observing a 6% increase. However, on the whole, the situation is stable, according to the minister.

Around 90,000 people in Luxembourg are now fully vaccinated, while 87% of available doses have been used up. The remainder are to be allocated for second jabs. Just 52 doses have been leftover so far, said Lenert, despite 20,000 people signing up to the waitlist.

Another 300,000 doses are expected by July, although Johnson & Johnson and AstraZeneca are yet to confirm deliveries.

This week, a sixth vaccine centre opened at Kirchberg's LuxExpo, although Lenert pointed out the centre would close temporarily in a week's time due to a delayed delivery. Although the centre can accommodate a capacity of 42,000 people per week, there are insufficient doses at the present time to keep it open, explained the minister.

19,500 out of 33,600 people who signed up for the AstraZeneca jab have been invited. However, the next deliveries have been allocated for second jabs only. Lenert added that GP practices would be permitted to administer jabs over the summer, depending on deliveries.

Around half of the 17 million available rapid tests have been dispensed to hospitals, care homes and schools, as well as private companies, the civil service and the Horesca sector. Vouchers will be sent to people who are not active members of the workforce, permitting them to buy up to 20 tests at pharmacies from the end of this week.

Vaccine side effects - a rarity in Luxembourg

He said it was very rare for a person to experience severe side effects.

Around 1,400 cases had been reported since the vaccine campaign began in the Grand Duchy, 230 of which were reported over the last month. However, the majority of these were considered to be very minor.

34 people have been hospitalised following the jab, but subsequent investigations revealed no link between the vaccine and their illness.

Two people have died in the last month, both male, aged 88 and 64. However, no link was established between the vaccine and the cause of death.

Finally, Lenert explained that Luxembourg was observing EU discussions regarding the vaccine "green pass". While discussions were ongoing in Brussels, Lenert said Luxembourg would wait for criteria to be released before acting upon it, but she expected the country to align with the EU for a universal solution.