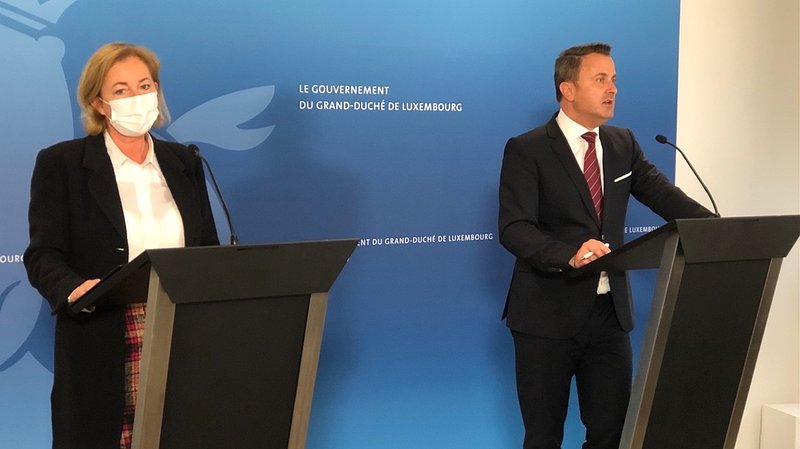 The government council has agreed on new measures, which will be in place from 16 May until 12 June.

"4 is the new 2," said Minister of Health Paulette Lenert. The situation in hospitals, at water treatment plants, and the number of new infections is stable, which means that new, lighter measures can be put in place from 16 May.

At home - the limit on visitors from other households will no longer be set at two, but increased to four. Prime Minister Xavier Bettel noted that "up to four people can be invited, and those four people do not have to be from the same household. If inviting another family, more than four can be invited." So that means if you are inviting people from separate households, the limit is set at four, but you could invite for instance a family of 6 who live under the same roof.

The four person limit also applies to the Horeca sector, who will also benefit from the reopening of indoor seating areas. The Prime Minister said that the enforced closing time will be moved back to 10pm (currently set at 6pm), and a maximum of four people will be allowed at one table indoors, under the condition that they have carried out a test.

3 tests are available for this latter requirement: the standard PCR test, which mustn't be older than 72 hours, rapid tests carried out by a professional with results less than 24 hours, and rapid self-tests which would have to be carried out on-site.

Outdoors at cafes and restaurants the limit is still set to four people, but there is no requirement for a test. Concerning gatherings, the limit will be increased from the current 100 to 150. Beyond this exceptions may be made for pilot projects for larger events, which may be granted permission to assemble up to 1,000 people - however these will be subject to strict sanitary protocol, defined by the ministry of health.

The curfew will remain in place, but will be moved back to midnight. Bettel noted that a study by the University of Oxford had found curfews more effective than closing schools.

The alternate week, or "A-B" schooling system will be lifted in secondary schools after half term.

Spectators - subject to the aforementioned limits - will again be allowed at sport events, and the restrictions currently in place for athletes under the age of 19 will be lifted. At swimming pools, a limit will be placed on one swimmer per 10 m2. The distance requirement of 2 metres in sport will now apply to groups of four or more, up from the previous two.

For the culture sector, the distance rule will also now apply for groups of four and up rather than two as previously, and groups of up to 40 musicians are allowed to practice/perform together outdoors.

There are currently no plans to ease restrictions specifically for vaccinated people, and the situation will be continued to be monitored before any such decision is made, said Lenert.

The government proposes that these modified restrictions be in place from 16 May, but this still has to be approved by the chamber of deputies next week. Finally vaccinations are seeing an acceleration, and some 50,000 people are expected to be vaccinated several days, 30,000 of whom with the AstraZeneca vaccine.