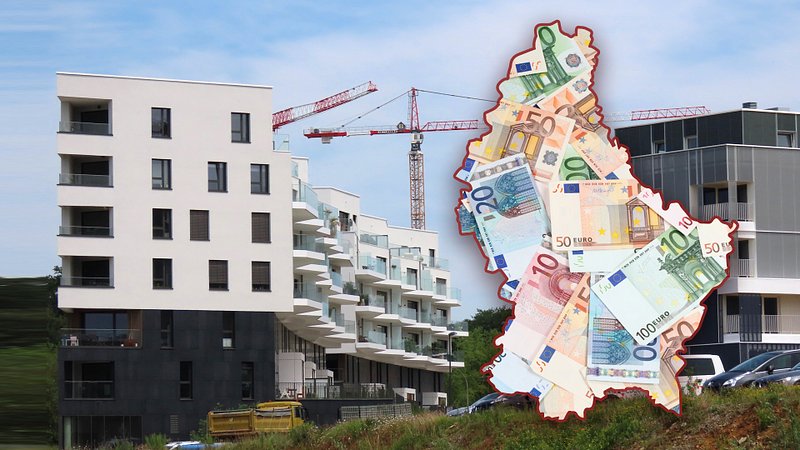 Property prices in Luxembourg continue to rise and, according to an expert from the Housing Registry, it seems unlikely that this trend will change in the near future.

The latest rise in property prices has surprised everyone, even Julien Licheron, a researcher who specialises in their evolution at Luxembourg's Housing Registry (Observatoire de l'Habitat). In an interview with our colleagues from RTL 5 Minutes on Thursday, Licheron admitted that the Registry expected the market to slow down but were "surprised" by the evolution it took instead.

In fact, according to a joint study by the National Institute of Statistics and Economic Studies (STATEC) and the Housing Registry published last week, house prices increased by 16.7% between the fourth quarter of 2019 and the last quarter of 2020, with a focus on older homes (+19.7% for older houses and +15.8% for older flats).

Read more: Housing prices on the rise despite Covid crisis

Licheron explained that "episodic" increases such as this can occur and, if prices are considered over a two-year time span, "new and old co-evolve very well". As for the latest price increase, Licheron pointed out that "it's nothing new".

In fact, according to the researcher, the latest increase is part of a trend which started in 2010 with increases of around 4.5 to 5% per year. Nevertheless, Licheron acknowledged, it is true that there has been an "acceleration in price increases since 2018".

For Licheron, this is proof that the health crisis has not had an effect on the property market. "There was obviously a significant drop in the volume of transactions during the lockdown, but we very quickly regained a pre-crisis rhythm," he explained.

The fact that the property market is resisting the crisis is one thing (and property owners will be delighted) but the fact that prices are continuing to soar is another. According to the expert from the Housing Registry, the recent price explosion can mainly be attributed to three factors, including a "temporary" factor.

The "very high" demand compared to the properties available on the Luxembourg market remains a constant, according to the researcher, who stressed that the number of housing constructions per year has not changed since the 2000s – although there have been fluctuations.

In addition, there is "an increase in the attractiveness of rental investment linked to the prospects of tax exemptions" and a certain instability of investments in retail and office space during the pandemic.

Finally, Licheron suggests that a change in regulations affecting the tax advantage of investors on 1 January 2021 may have prompted them to "bring forward their investment", which could "partly" explain the surprising rise in the fourth quarter of 2020.

This change did not happen on its own, as the Financial Sector Supervisory Commission (CSSF) published new recommendations on granting of credit that came into effect on the same date.

Prices will continue to rise

What is to be expected after this price explosion? Will prices stabilise? Will they fall? Licheron insisted that he does not have "a crystal ball" and that the situation may call into question all of the experts' predictions.

However, he stated that "the underlying factors remain strong" and that "there is no reason for this to change". In fact, demand remains very strong, and supply restricted in Luxembourg.

"A fall in prices is not desirable."

The expert expects prices to continue to rise but not at the same rate as in the fourth quarter of 2020. He hopes that there will be a deceleration in price increases and that the Grand Duchy will return to a "healthy" increase (2.5 to 3% per year).

As for a possible fall in prices, Licheron pointed out that this is not desirable, stating that "it is never a good sign for the economy and for the country's property owners".

Will the bubble burst?

Despite Luxembourgish salaries being higher than elsewhere in the Greater Region, after ten years of rising property prices, buying is no longer within the reach of everyone.

This observation is validated by the expert from the Housing Registry, who believes that "first-time buyers" have become a "subset" of the population that is no longer representative due to their higher-than-average income and their average age.

Is this an indication that Luxembourg's housing bubble might burst in the near future? Not in the eyes of Licheron, who maintains that he sees "no reason for prices to fall" as long as the economic situation remains "more favourable than in neighbouring countries".

In his view, a crisis in the real estate market could only occur in two cases: a major economic crisis or "asymmetric shocks" that would affect Luxembourg more than other countries and would reduce the country's attractiveness.