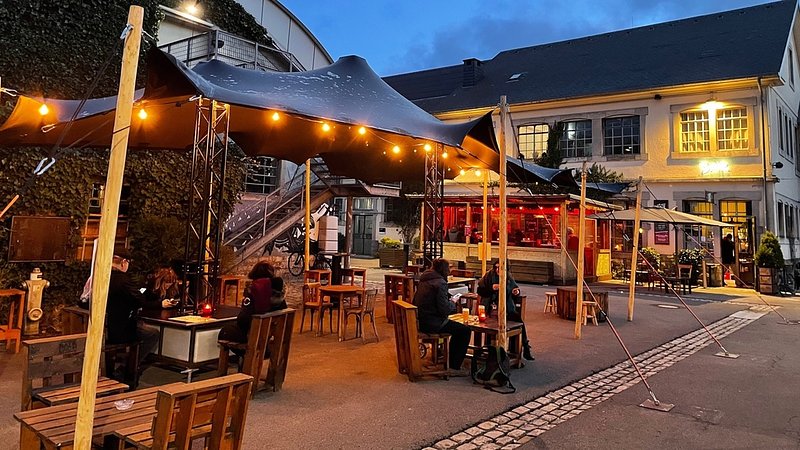 After being closed for over four months, the first terraces in the Grand Duchy opened at exactly 6 am on Wednesday. Despite the icy temperatures, a number of regulars did not miss their chance to be among the first to place their orders.

Owners of cafés and restaurants are allowed to serve a maximum of two customers per table, except if they all live in the same household together, on their terraces from 6 am until 6 pm.
Even though the weather is not exactly ideal for the first day of the big reopening, the Horesca told RTL that the decision is "a step in the right direction". However, the Federation criticises the opening hours, stating that it would have preferred terraces to stay open until at least 8 pm. For the Horesca, the closure at 6 pm could lead to people deciding to meet at their homes to continue their get-togethers, i.e. a location where it is practically impossible to ensure compliance with sanitary regulations.

Most café and restaurant owners expressed their relief and happiness on Wednesday morning, even though some had to reduce the number of seats and tables on their terraces significantly.

Vis à vis in Luxembourg City was among the first Horesca businesses in Luxembourg to open their terrace on Wednesday morning at exactly 6 am. The Horesca general secretary François Koepp was one of the guests and stated that he was very happy the Federation managed to reach this agreement with the government. According to Koepp, the Horesca estimates that between 30% and 40% of their members will open their terraces on Wednesday while others will wait for more favourable weather conditions.

Koepp also stated that he understands that some people are afraid that the opening comes too soon and will worsen the situation, but pointed out that the Horesca wants to be "a part of the solution" and is convinced that they can help ensure compliance with protective and social distancing measures.

Strict rules still apply: Customers must remain seated to consume their food and/or drinks, masks are compulsory for both customers and staff when not seated, and tables must be 1.5m apart or separated by Perspex.

As an administrative closure of the sector is still formally in force, state aids such as partial unemployment will continue to be paid out.