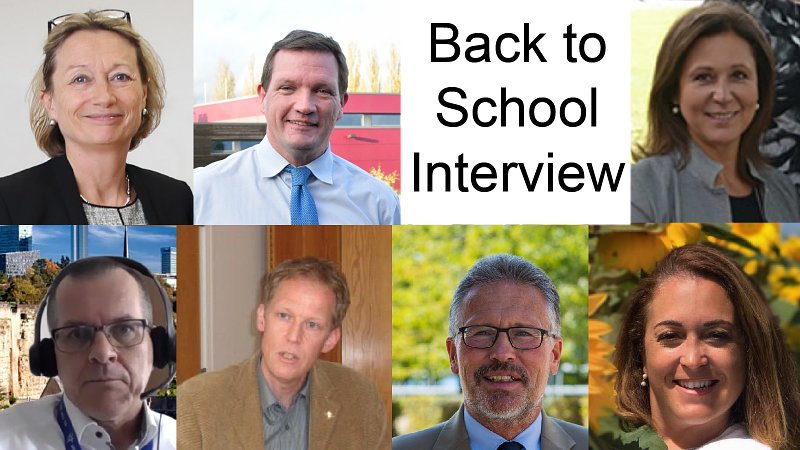 The European Schools, who could not attend, submitted a written statement, parts of which are included in this article.

In a few days, the ISL will be the first school to open its doors again in Luxembourg. The opening comes during a time when Europe is seeing new spikes of infection numbers and when the role of young people in the transmission of the virus is still not entirely clear while the detrimental effects of distant learning for all age groups become more evident.

They draw positive conclusions with regards to their experience with schooling under lockdown and with the subsequent phased reopening of the schools.

At ISL, apart from the final two years, everyone had returned before the summer holidays in alternating classes. At St Georges, apart from the top three year groups who continued distant learning and the 3-year-old nursery students, all of the students had been able to come back. OTR International School had offered weekly alternating classes to all of their students. 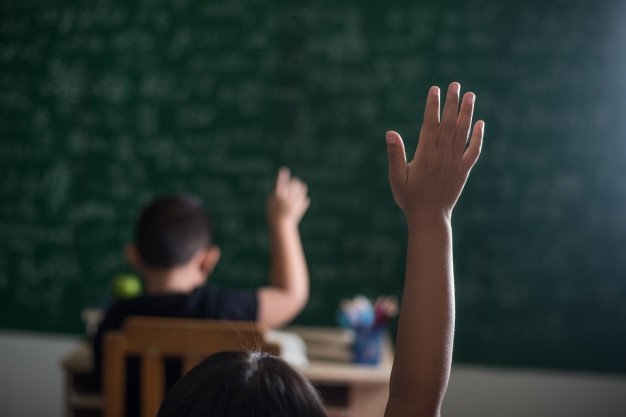 Ms Crush, from ISL, asked about their experience during lockdown, says: “Obviously, it was a very challenging time for everybody but after a few days we moved into continuing the teaching online and it helped that most of our students have their own laptop”.

The second phase though, when distant learning evolved into partial in situ teaching, was more demanding, as Ms Crush states:

“This phase was a bit more challenging and we hope that we don't have to repeat that”, she says, explaining that that model does not really provide a continuous fluent period of education.

“You are going to find a bit of a disconnect when you have some children in and some out.”

Nevertheless: “Even though some students enjoy the online learning, everyone really appreciated the getting back to school because the socialisation part of learning is so important!”

In the case of ISL, they were very relieved that neither staff nor students needed to go through the exam process, which would have been challenging to organise.

Mr Barkei from St George's faced similar experiences and adds that, like other schools as well, the students were familiar with online learning because of programmes offered by the school already before the lockdown. Like at the ISL, all of the external exams were cancelled but the students were left in a limbo when an algorithm influencing the final A-levels came into play, with the result that many of them were downgraded.  It was eventually amended by the British government such that students received their predicted grades.

“Only a small number of students found online learning difficult”, he says, “but some of the parents who had to juggle working from home and supervising their children’s work found that challenging, especially when they had younger kids”.

For the phased reopening, the school had to be creative offering classes and still guaranteeing social distancing:

“We had to find 24 additional classrooms, so we had additional classes in our auditorium, in the gymnasium and even in my conference room”, says Mr Barkei, adding that “Using this model is not sustainable in the long term….over a longer period of time we do need to bring our students back full time” and the others agree with him.

Bringing the students back into the school is very important, Ms Gourdi from OTR confirms. “During distance learning, the teachers worked well and we also received a lot of help from the parents who supported their kids, especially the ones with smaller children”.

Nevertheless, while some kids enjoyed being at home and having online lessons others were not so comfortable.

“We managed, and we have gained valuable experiences but we believe that for the pupils’ academic and social development it is essential that they are present in school every day. We need to make specific plans for students who learn differently and that was not so easy”, she concludes.

OTR was one of the few schools that offered more than the core subjects.

At most schools, subjects like Music, Art, Sports or Drama did not take place and as Mr Wedel and Mr Frithiofesen, heads of the European Schools, argue:

“Not only the way of learning and teaching had completely changed, but also school life: school trips, events, meetings, school fête, National Day celebrations, all those elements that enrich our school life and that we value so much, had to be cancelled. New means of communication have been put in place, but they could not and cannot replace direct exchanges and social interaction between the members of the school community. “

On top of reorganising, the schools even had other issues to deal with when some parents refused to pay the school fees because they were of the opinion that, since school did not happen the usual way, they would not be obliged to pay.

A new school year ahead 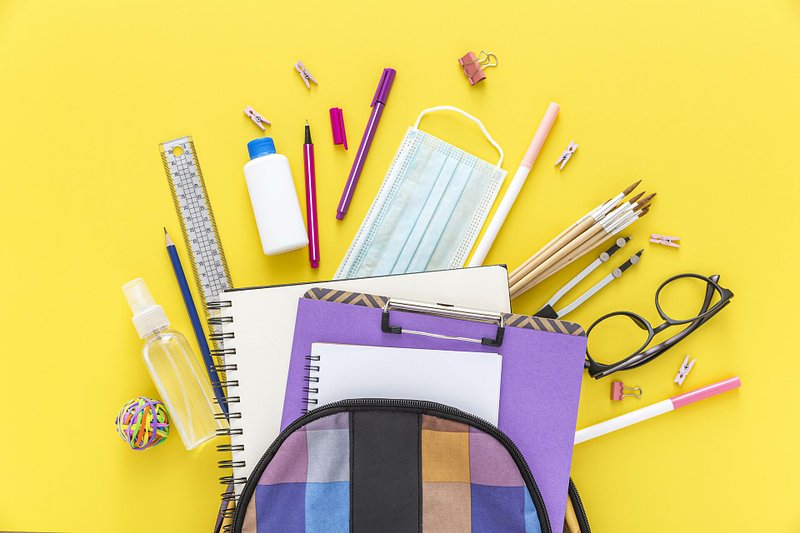 “Our school will open 7 September and we will see what happens until then and decide accordingly”, says Ms Agostini from OTR.

ISL is planning to start with the full schedule, with all of the students attending school and all of the classes offered. Students will have to wear masks at all times except for their time in class if the respective teacher allows this. Temperatures will be taken and inside the school “traffic” will be organised with one-way systems. 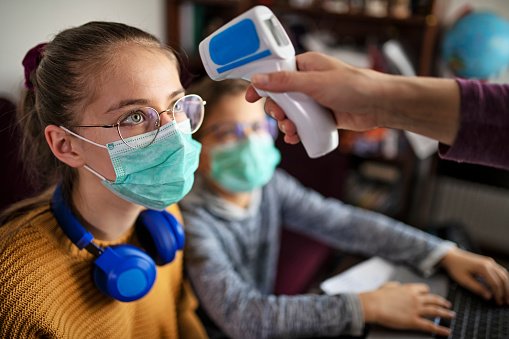 The two European Schools are also very busy preparing their start on 3 September:

"Following meetings with representatives of the competent Luxembourgish authorities this week they will communicate the concrete modalities by the middle of the next week:
“We are currently in close contact with the competent national authorities in order to obtain all relevant information to be best prepared for the start of the 20/21 school year.”

The various projections include a more or less regular back-to-school start and also mixed scenarios with “in situ” lessons supplemented by distance teaching and learning.

All of the schools have similar measures in place.

Everything that is allowed outside of school should also be allowed in school. "As Mr Meisch stated it at one of his press conferences this will also be the motto at ISL," says Mr Herrmann from ISL.

The private schools have to follow the Ministry of Health and Education protocols and Mr Barkei adds: “The guidelines are the minimum standards and we will evaluate the situation on a day by day basis and potentially add measures”.

Mr Herrmann expects that the new phase of the large-scale testing will again also include the schools.

“We feel very well guided by the Ministry of Health and Ministry of Education. The latter is adapting the guidelines to a school environment”, he says and “whatever they have suggested since the beginning of the pandemic was very helpful”.

The schools anticipate that they will have coronavirus cases in their communities but they are confident to have the tools to react quickly.

The guidelines are going to be communicated during the coming days and from the previous experiences the schools are confident that the appropriate measures will be taken.

“We are creating a school bubble; we are trying to make the school as safe as possible and as healthy as possible”, says Mr Barkei and adds that everyone seems to have learnt to immediately inform the school should they feel sick:

“The three weeks before the lockdown in March the school community was the healthiest”.

To the question if he thinks that regular testing of staff and students could be advisable, he says:

“The mass testing across the population as a whole is much more effective rather than testing groups of students, who for example are being tested on a Friday, go to a party on Saturday and are potentially Coronavirus positive on the Monday after”.

How comfortable is staff with coming back?

“Once the teachers came back and saw the measures taken by the schools that has given the people a lot of confidence”, says Ms Crush and “they are confident that they are ready to start next week”.

“A challenge for everyone is to realise that this is going to be the New Normal”, says Mr Barkei and Mr Herrmann adds that “schools need to educate their community about how to deal with this pandemic, provide reliable information and add this information to the day-to-day education”. 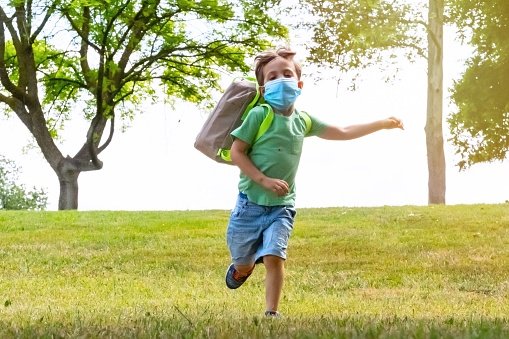