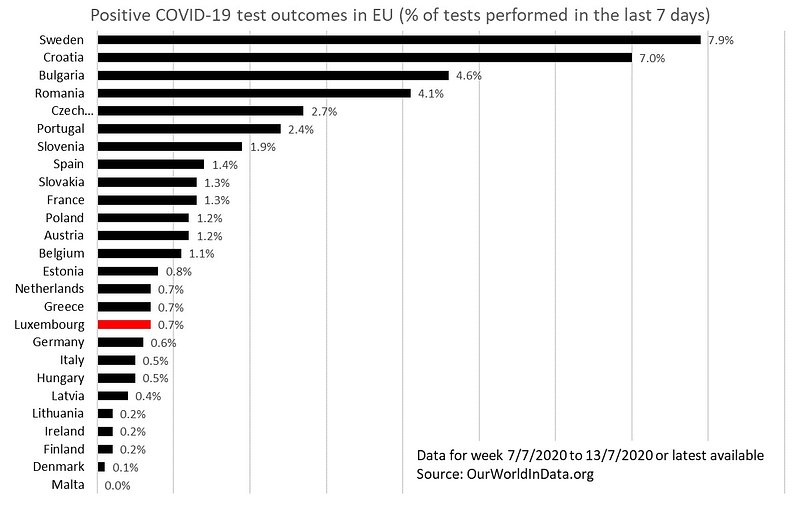 Amid other countries pointing to Luxembourg’s high numbers of daily newly reported COVID-19 cases, fact is that this is also due to its large-scale testing strategy.

The relevant statistics show that the positive outcomes as a percentage of the many tests carried out over the course of the last seven days in Luxembourg is similar to Germany, and even lower than France and Belgium.

As can be seen on this Oxford University based website, Luxembourg’s infection rate was 0.7%, compared to 0.6% in Germany, who has declared Luxembourg a risk region, 1.1% in France and 1.3% in Belgium, who put Luxembourg in the orange travel category, meaning that travel is subject to quarantine.

In fact, with less than 1% of tests yielding a positive result at the moment, Luxembourg is in the lower range of the EU.

Half of the EU countries have infection rates above 1%. Of those, the Eastern EU Members Croatia, Romania, and Bulgaria as well as neighbouring Serbia and Ukraine have rates of more than 4%, and the fact that Sweden chose a different path can also be seen in these statistics.

With 7.9% of the tests carried out in the last seven days reported as positive, Sweden has the highest weekly infection rate in Europe – still lower than the US with 8.7%.

No one knows where this “journey” may take us but these are the current comparative facts.