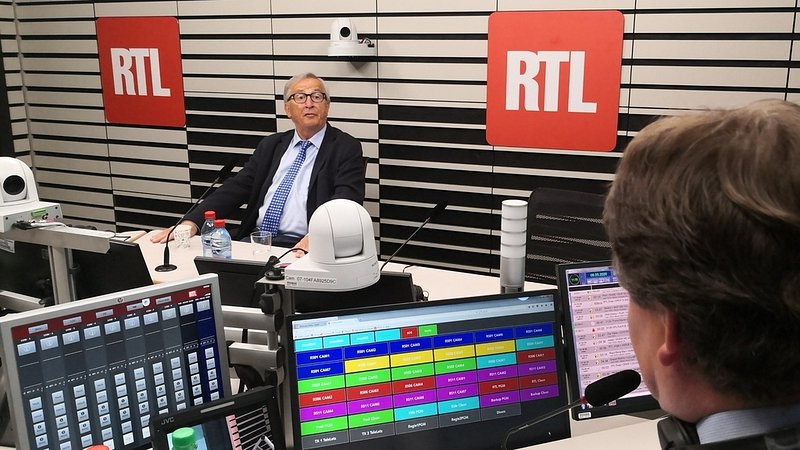 The former prime minister and ex-president of the European Commission, Jean-Claude Juncker, was a guest on RTL Radio’s segment "Background" this Saturday.

According to the former president of the European Commission, the current government is managing the corona crisis well. The veteran politician applauded Minister of Health Paulette Lenert for her tireless efforts and also praised Prime Minister Xavier Bettel for his handling of the unprecedented crisis.

Juncker conceded that the government's communication was slightly repetitive, but well done overall.

The economy, whether on a national or European level, needs help to restart. Juncker acknowledged that the aid package from EU member states and the commission, worth €540 billion, as well as the €750 billion from the European Central Bank represented a step in the right direction. However, he also stressed that the next European budget must be significantly increased in order to manage the crisis.

Juncker was reluctant to compare the developing economic crisis to the financial crisis of the past decade. According to Juncker, drawing parallels would prove to be difficult because this crisis affects the entire economy all around the world. Luxembourg would have to take similar measures than those taken in 2008/2009. The former prime minister explained that, back in 2008, the country was faced with the additional challenge of justifying aid packages to the banking sector - a large part of the public did not understand why banks play a key role in restarting an economy. Juncker concluded that this crisis will therefore be easier to manage from a political viewpoint.

Border controls: A virus cannot be stopped by closed borders

"It’s absolutely ridiculous!": This was Juncker’s comment on German border controls. It is an outrage that German authorities, and mainly the Federal Minister of the Interior Horst Seehofer, unilaterally decided to impose these controls, Juncker said. He labelled the border closures an act of provocation and stressed that closed borders will not halt virus transmission.

The former prime minister of Luxembourg argued that German politicians would have to explain why the Netherlands for instance would be any less likely to contribute to the spread of the virus than Luxembourg.

Juncker stressed that the housing market was still the biggest problem for the Grand-Duchy. A significant effort on a national level is needed in order to overcome this issue. The former prime minister stated that it cannot be justified that a small number of people are selling expensive building land while others cannot find a flat. This level of inequality is not sustainable in the long run, he stressed. It would not hurt to raise taxes on the wealthy, he said. Less financially fortunate members of society on the other hand cannot afford higher taxes, Juncker explained.

Juncker stated that he preferred being prime minister to president of the European Commission - even though he enjoyed both positions. He criticised the current commission of his successor Ursula von der Leyen, stating that she didn’t react firmly enough at the beginning. The commission then only slowly managed to clear up certain policy issues. However, Juncker also stressed that this is not to be seen as a failure of the EU but instead as a failure of the member states.

Juncker explained that the authority of the president of the European commission was too limited in too many areas. During his time in office – whether during the financial crisis in Greece or the refugee crisis – he therefore often awarded himself the necessary authority. He mentioned “telephone diplomacy” as a key element in this strategy.

The former prime minister stressed that he would under no circumstances return to politics as a candidate for his party the CSV. While he rejected his age of 65 as a reason, he stated that he simply felt he “had done his part”. He maintained that he is not considering to leave the party.

When asked about the change in government of 2013, Juncker stated that he did not feel insulted when no other parties openly wanted to enter a coalition with him. Instead, he explained that he was angry that the election results had not been respected.

Prime Minister Xavier Bettel’s government radically separated church and state. Juncker stressed that many of these changes, e.g. the abolishment of religious education in secondary schools, would also have been realised under a CSV government. He argued that the CSV was and should remain a people’s party. According to the former prime minister, the CSV should be a party that does not go for what is popular but instead for what is necessary.

Juncker also quit smoking and stated that he felt less nervous compared to his smoking days.

Memoir in the works

Jean-Claude Juncker plans to publish a memoir. He was unable to give a publication date as interviews still take up a considerable amount of his time. He nevertheless explained that he has already completed a draft of the book, which, he said, is the most difficult part about writing a book. In his first book, he intends to focus on his time as president of the European Commission in Brussels. Juncker also insinuated that a sequel about his time as prime minister of Luxembourg will follow at a later stage.