The national weather service has announced potential danger on roads thanks to the snowfall forecast through to Thursday evening.

The first snowflakes were reported in the vicinity of Soleuvre at around 8 am. Not long afterwards, snow began falling in Kirchberg too. Meteolux have forecast between five and eight centimetres of snow, potentially even more in some areas.

It goes without saying that winter tyres are mandatory and anybody caught without them will be rewarded with a hefty fine. In addition to snowfall throughout the day, there will be strong wind gusts up to 80 km/h.

At midday on Thursday, the ACL announced a number of road closures due to the wintry conditions.

Other roads have been closed because of accidents or fallen trees. There have also been disruptions to public and school transport.

Motorway speed limits have been reduced to 70 km/h. At 2 pm, the police announced on Twitter that 25 accidents occurred between midday and 2 pm.

Traffic issues have continued throughout the afternoon. At 4.45 pm, emergency services reported seven accidents leaving people injured. One person was injured in a crash on the RN10 between Mertert and Grevenmacher at 11.30 am.

At the same time, a vehicle overturned on the A13 towards Schengen, leaving one person injured. Another person sustained injuries in a collision between a car and a lorry on the A13 towards Petange and further accidents occurred in Rollingergrund, between Schoos and Fischbach and in Hollerich.

Police announced at 5pm that more than 50 accidents have occurred on Luxembourg's streets. Fortunately most accidents only caused material damage - very few people were injured. Some cars involved in the accidents did not have winter tyres mounted. Traffic is likely to continue to be disturbed.

On Friday, the yellow alert was lifted in southern Luxembourg, but remains in the north where further snowfall is expected between 5pm and 8pm. However, temperatures are expected to rise by Saturday.

Luxembourg Airport announced that the weather conditions would cause flight delays and cancellations. By 4 pm, eight departures and seven arrivals had been cancelled, affecting flights to London City, Frankfurt, Manchester, Munich and more. Some flights have also been diverted. We recommend checking the Luxembourg Airport website before arriving at the airport for onward travel.

All flight information is as well available at: https://t.co/TMW5LiEcmR pic.twitter.com/zNfJh6zW0e

You can consult our traffic updates below for up-to-date information. 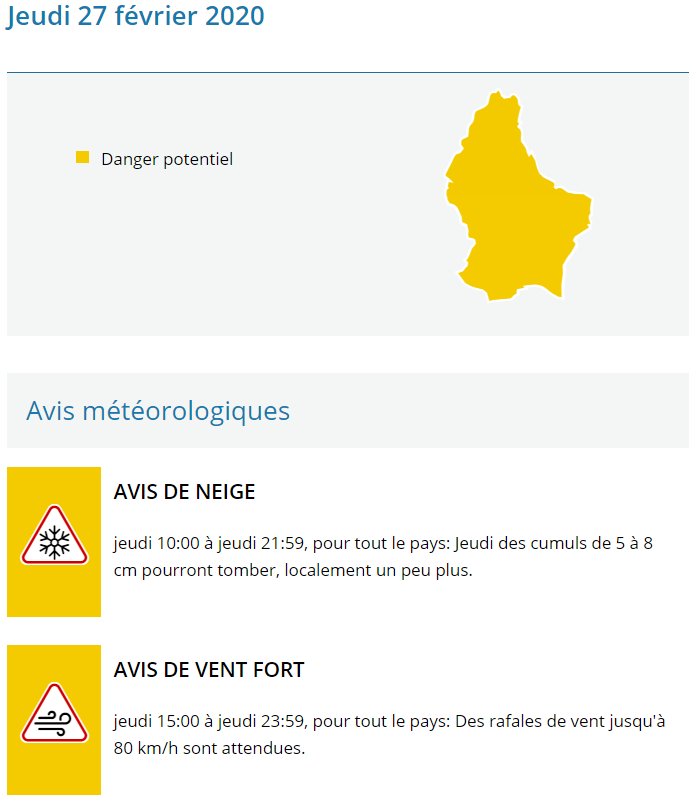