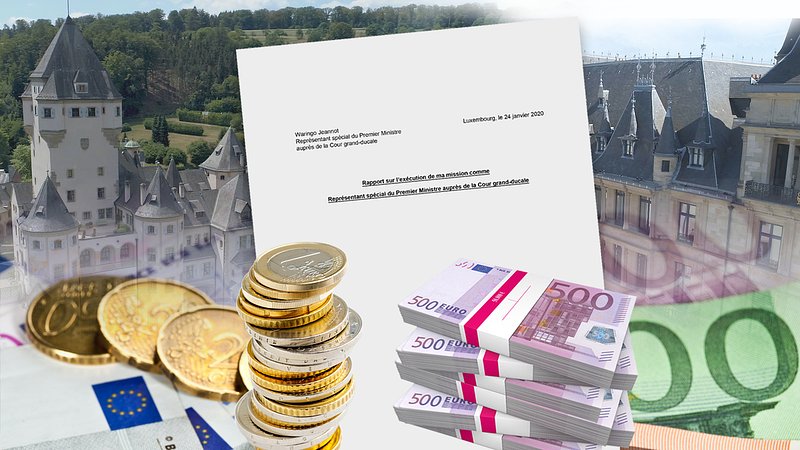 The money that the Court receives is spread across the entire state budget, from the Ministry of State through to Sustainable Development and to Defence.

First of all, there is a "civil list" that finances, on the one hand, part of the Court's operating and staff costs, and, on the other hand, provides a sort of salary for the Grand Duke.

According to the Waringo report, it would be better to state clearly that the Grand Duke has full autonomy in how he uses the second half of this share, which would also be fully taxed.

This civil list dates back to the 1948 Constitution. At the time, it was agreed that the Grand Duke would receive 300,000 francs, which translates into €1,2 million today.

As this sum has not been enough to cover the Grand Duke's costs for a long time, he receives money for additional hospitality expenses in the amount of €744,000.

To pay the Court staff - which the civil list budget does not cover - the State pays €7,7 million per year. The operating costs, also covered by the State, amount to around €726,000.

Currently, it cannot be said with certainty whether the activities of The Grand Duke and Duchess Foundation and the Stand Speak Rise Up association were not also partly funded with taxpayers' money.

This is why the report proposes the creation of a second entity: "La Maison du Grand-Duc". This would make it possible to make a transparent list of the activities carried out within the framework of official functions during the year.

There should be a clear separation as to what is paid for using private funds as opposed to state money. Jeannot Waringo criticises the fact that the government’s official accounting rules are not applied at the Court. In fact, accounting and budgeting rules are not fixed at all.

In addition to operating and staff costs, the State also finances a range of other things. For instance, the Grand Ducal family’s holidays as well as the various official Court receptions are paid for by the Minister of State - costs which amount to an average of €250,000 a year.

Other costs are covered by other administrations, an example being the fact the Ministry of Sustainable Development is in charge of the maintenance and renovation works of the Palace and Castle in Colmar-Berg. This adds up to around €1,6 million per year.

Also, some of the public administrations’ staff is working for the Court, notably two employees taking care of the Palace’s technical maintenance, seven in charge of the Colmar-Berg castle’s park, as well as one person employed by the Ponts-et-Chaussées (bridges and roads department). Again, this adds up to costing the Ministry of Sustainable Development a yearly average of €660,000.

The Ministry of Defence bears the cost of ensuring adequate security for residences and police escorts, which is not accounted for in the Court’s budget as the country’s security is the State’s responsibility.

Bodyguards employed by the Police and army’s warrant officers are responsible for ensuring the Grand-Ducal family’s safety, both at public appearances and privately, which adds up to an additional €900,000 per year.

The Court does not pay its own postal and telephone fees, as those costs are borne entirely by the Post. This arrangement dates back to laws from 1855, 1884 and 1885. A reform was enacted in the year 2000, however, the arrangement saying the Court does not have to pay its telephone and postal services bills was never amended. This represents a sum of between €560,000 and €615,000.

When adding everything up, the Grand-Ducal court costs the State and its citizens roughly €15 million each year. The report’s author does not specify whether this is too much or too little. What’s important, though, is to show a clear separation of the public and private budget, as wall as managing the Court’s finances with more transparency.