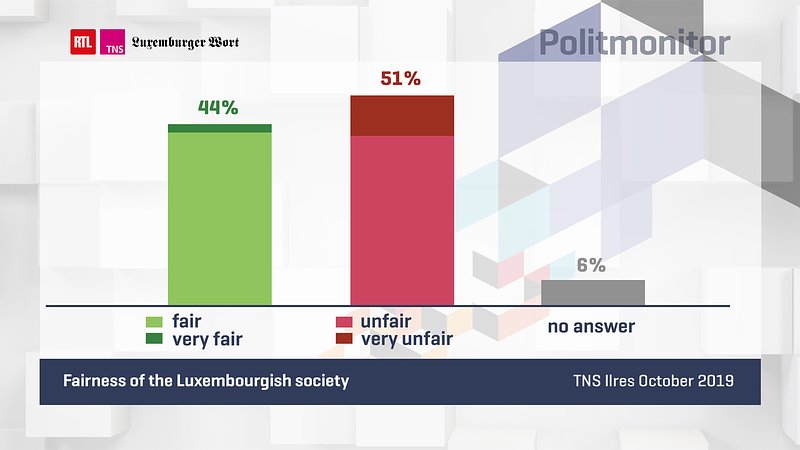 Part two of the TNS Ilres Politmonitor survey for RTL and the Luxembourg Wort explores the most pressing societal concerns.

Whilst figures appear to be quite balanced, TNS Ilres' Tommy Klein explained that the proportion of respondents qualifying society as 'very unjust' has jumped from 7% in 2018 to 10%. Describing this as a 'sad observation', Klein nevertheless highlighted that different profiles tended towards different evaluation. Those who interpret society as unjust are mainly women, the elderly, and individuals with a low income. Young people, on the other hand, appeared to be less pessimistic.

The main issue worrying respondents is access to affordable housing, as well as growing traffic, the opportunities of the next generation, the consequences of climate change, and the struggling nature of the Luxembourgish language. This latter point refers to concerns that Luxembourgish is slowly becoming a dying language, being usurped by other languages in society.

In terms of how the population wants politicians to address these issues, respondents broadly wished for punitive measures rather than incentives. Instead of giving residents free choices or incentives in specific domains, respondents hope that politicians introduce regulations, laws, and sanctions. However, Klein stressed that this tendency is not quite clear either way, and the question is overall rather complex and dependent on a variety of different subjects.

Part one of the Politmonitor survey queried respondents on individual politicians, but part two focuses on their actual work. Compared to the pre-election period, respondents rated both the government and the opposition lower than previously, with the exception of the Democratic Party. Rated from 5 to -5, the DP climbed 0.1 to score at 1.1. The government is rated as working best at 1.3, whereas the ADR was marked as the worst party at -0.7. 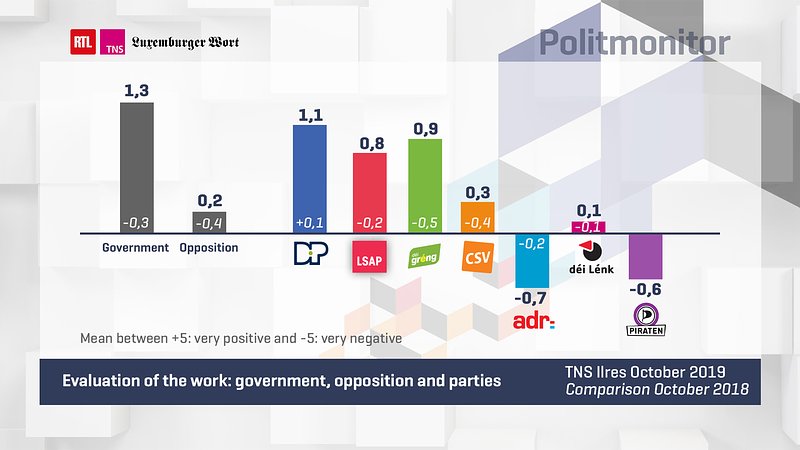 For more information on the methodology and the questionnaire, visit www.alia.lu